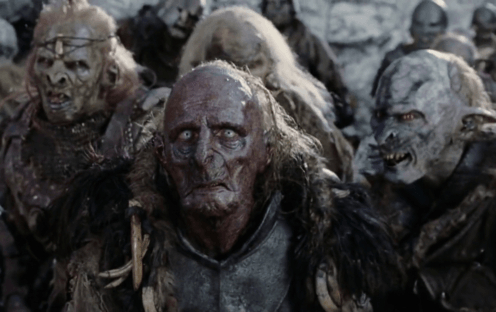 To Tolkien, the machine represents a means to attain power over others. His orcs -- deformed and ugly creatures, whose hands are sometimes replaced with weapons -- embody this lust for power. LOTR Wikia

My grandfather was a carpenter, and I don’t think he ever developed much of a sense of trust in machines. I remember him laboring away at our home one summer, transforming our screened-in porch into a dining room. He could drive a nail through a 2x4 with a single blow, a skill I still haven’t mastered. He simply loved making things, and he was good at it. But he referred to the family car simply as “the machine,” and he regarded what lay under its hood with suspicion.

He believed that such machines enabled us to travel too far too fast, preventing us from getting to know our own backyards. He feared that the machine age was depriving us of the joy of craftsmanship.

Though he never knew it, I think my grandfather’s attitude toward machines closely paralleled that of Lord of the Rings and Hobbit author JRR Tolkien. Tolkien’s views on the matter are apparent throughout his work, and before the final installment of the Hobbit trilogy fades from cinemas, the time is ripe to revisit Tolkien’s critique.

No one is suggesting that we should toss our machines onto the scrap heap of history, but the devices my grandfather and Tolkien decried are now so integral to the world we inhabit that we may have difficulty seeing them, let alone assessing their impact on our lives.

Tolkien’s dark side of machines

To Tolkien, the machine is something far more menacing than a mere mechanical device. Fundamentally, it represents the lust for power – in particular, for power over others. The evil lord Sauron wants the one ring more than anything and is willing to stop at nothing to get it precisely because it will enable him to exert absolute control. The ring is machine par excellence, the device that will enable its possessor to establish absolute tyranny over every other living creature. It is not a means of liberation but a tool of coercion, domination, and enslavement.

As the British historian Lord Acton would have warned, the power of the ring not only corrupts but corrupts absolutely. Tolkien’s ring can be thought of as machine par excellence, the device that will enable its possessor to establish absolute tyranny over every other living creature. LOTR Wikia

The machine’s corrupting power is visible not only in warfare and military conquest, but also in everyday life. For the machine takes something human – the power to produce, which is both creative and life-giving – and transforms it into something dull and enervating. Hobbits like to make things and delight in what they produce – furniture, utensils, carts, simple crops, bread, cheeses, and perhaps above all, ale. But they produce such things for two simple reasons: because they are necessary and because they are a source of pleasure.

Labor-saving devices among the hobbits are of the simplest variety, and they make use of their leisure for enjoyment, not to acquire still more.

Men, by contrast, can be duped into supposing that the power to produce is the power to dominate. And domination is possible not only by wielding weapons of war but also by so automating everyday life in the name of saving labor that we become alienated from the very work that defines our lives. Instead of making what we need to live and enjoy life, we simply purchase it; the more wealth we acquire, the more we can afford to purchase.

The orcs take it one menacing step further

The dire implications of the machine are captured in Tolkien’s orcs, as portrayed in Peter Jackson’s cinematic trilogies. These creatures do not come to exist naturally, but are bred by an evil power out of the slime of the earth. They are deformed and ugly creatures, whose hands are sometimes replaced with weapons. They seem to hate everyone (perhaps even themselves), and they take pleasure only in destroying and defiling.

Tolkien suggests that they make no beautiful things, perhaps because they cannot recognize beauty. They care only about efficiency and conquest, to which they are driven by evil masters who rule through fear.

The metaphorical orc-ish machine is buried deep within the earth, a hot, constricted place filled by the sounds of clanging and grinding. Here, living things such as trees represent nothing more than raw materials, to be sliced up to produce the implements of domination and destruction. The scene resembles caricatures of Andrew Carnegie’s 19th century Pittsburgh steel plants and Henry Ford’s 20th century River Rouge automobile assembly plant, where men have been turned into mere means of production, mindlessly performing the same repetitive task, hour after hour and day after day. It is a place devoid of love and hope, animated only by a lust to enslave. The world of the orcs could be thought of as a caricature of Henry Ford’s assembly line, where men mindlessly performed the same repetitive task. Wikimedia Commons

The orcs use technology to enslave others, yet they are also little more than a pseudo-living technology of enslavement. Though sufficiently powerful to threaten goodness, they lead utterly miserable existences. They seem inhuman in part because their humanoid physiognomy deviates so disastrously from our own. But even more, they are utterly lacking in respect for the freedom and dignity of other creatures, something that even wayward dwarfs, elves, hobbits, and human beings are at least capable of recovering.

Were the orcs' conquest ever to be completed, they would have nothing left to live for, nothing good or beautiful to which to aspire.

Have faith: Tolkien gives us hope

Tolkien’s dim view of the machine is awesome in its simplicity. If a means of organizing human life can respect human freedom and dignity, it can be a force for good. A factory is not necessarily a forge of enslavement. But as soon as it starts putting efficiency and productivity ahead of humanity, it begins to resemble the worst chapters of the industrial revolution, as Blake and Dickens damningly portrayed.

Human ingenuity becomes nothing more than a tool for inflicting hurt and destruction – exactly what the orcs embody. The machine represents coercion, and it is impossible to virtuously coerce a human being, even for good ends.

But Tolkien’s perspective on the machine is not a fatalistic one. The lust for power is not the sole contender for the human heart. Other longings, such as those for beauty, justice, and fellowship are also at work, and if we listen to them we can reap many of the fruits of technology without selling our souls. Like my grandfather, who tended his grapes on a backyard trellis that he crafted by hand, Tolkien seems to have loved the world, and to have believed that human beings are capable of making it a better, more enjoyable place.

To do so, however, we must recognize the machine for what it is – a mere tool with the potential to enslave, against which we must be ever on guard.

Richard Gunderman, Chancellor's Professor of Medicine, Liberal Arts, and Philanthropy at Indiana University-Purdue University, does not work for, consult to, own shares in or receive funding from any company or organization that would benefit from this article, and has no relevant affiliations.