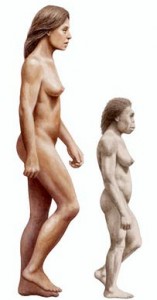 Since the discovery in 2004 of Homo floresiensis, an ancient hominid nicknamed “Flo” and also “hobbit”, after the diminutive villagers from J.R.R. Tolkien’s Lord of the Rings trilogy, due to her small size relative to modern humans, much debate has been raised over the origins of the species.

What were the genetic and historical events that led this isolated group of humans, which are believed to have migrated from mainland Africa or southeast Asia to the island of Flores and stood at about three and a half feet, to evolve such a small stature?

This hominin is remarkable for its small body and brain and for its survival until relatively recent times (possibly as recently as 12,000 years ago). Recovered alongside the skeletal remains were stone tools believed to date from 94,000 to 13,000 years ago. Some scholars suggest that the historical H. floresiensis may be connected by folk memory to ebu gogo myths prevalent on the isle of Flores.

Ten years after the initial discovery, the team of scientists who found the remains of a female Homo floresiensis in a cave recounted the experience in Nature. Geochronologist Richard Roberts, who helped conceive the excavations, recalled his initial disbelief that they had indeed discovered a new human species:

“It was a very small body. That was the first thing that was immediately apparent — but also an incredibly small skull. We first thought, ‘Oh, it’s a child.’ There was a guy who was working with us called Rokus. He did all the faunal identifications of the bones. But Rokus said, ‘No, no, no, it’s not a child. It’s not modern human at all. It’s a different species.'”

The team later recovered bones from as many as nine such people, all about a yard tall, the most recent of whom lived about 13,000 years ago.

The significance of the discovery, and the reason so many scientists have been reluctant to accept its validity, is that it overturns long-held beliefs about the trajectory of evolution that led to modern humans. Human migration out of African, it was thought, resulted in Neanderthals and Homo sapiens sharing the Eurasian continent until the former’s eventual extinction. However, as Roberts explains, the appearance of the “hobbit” remains has forced scientists to question the validity of that assumption.

“We had such a nice simple story, where we had modern humans and Neanderthals, and we bumped them off, that was the end of Neanderthals. We ventured across southeast Asia and it was basically empty because Homo erectus had died out there already, and we sort of just wandered into Australia and there we go. It was a clean and almost crisp little story. It made nice sense. Everyone was happy with that. And then suddenly the hobbit pops its head up.”

Anthropologists have also identified a number of additional, less obvious features that might distinguish hobbit from modern H. sapiens, including the form of the teeth, the absence of a chin, and the lesser angle in the head of the upper arm bone. Each of these putative distinguishing features has been heavily scrutinized by the scientific community, with different research groups reaching differing conclusions.

Anthropologist Robert Martin of Chicago’s Field Museum is the most outspoken of the large group of scientists who say the bones do not represent a new species but belong to small Homo sapiens—perhaps people who suffered from microcephaly, a condition in which the brain fails to grow to normal size. Other hypotheses have been put forward, including that the individuals were born without a functioning thyroid, resulting in a type of endemic cretinism (myxoedematous, ME), and that the principal specimen LB1 suffered from Down syndrome.

Rick Potts, director of the Smithsonian’s Human Origins Program, who once doubted that the Hobbits were a separate species, has since changed his mind: “Flores was this wing in the building of human evolution that we didn’t know about. There is no reason that 800,000 years of experimentation could not evolve a small but advanced brain.”