John Dennehy
I was fascinated by the discovery of the dwarfed hominin Homo floresiensis back in 2004 when it was first announced, but was skeptical that it was really a separate species. Later when I saw a cast of the skull, I admit to being more enthused with the possibility of a new species. Not being a anthropologist, I couldn't discount the possibility of microcephaly and/or dwarfism. 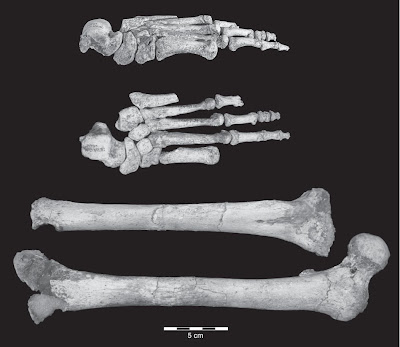 However, a recent pair of articles in Nature discount this possibility, and I'm convinced. Jungers et al. analyzed the H. floresiensis foot and report that it is quite unhumanlike. For a meter-high hominin, it sure has a big foot! At 20 cm, it is much longer than would be expected for a proportionately smaller human. In fact, the foot is much closer in length to that of a chimpanzee. 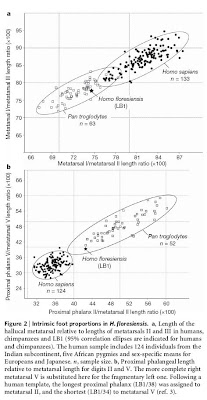 I think it is pretty unlikely that, if island dwarfism or microcephaly were the cause, the creature would have showed smaller features except for the feet. In other words, all features should have been reduced proportionately. Instead this guy has clown feet.

So if it isn't human, what is it? Most wagers are on a descendent of H. erectus. A close relationship of H. floresiensis with H. erectus is to be expected. H. erectus is believed to be the first hominim to leave Africa (ca 2 mya). In fact, the first H. erectus found was Dubois' Java Man (Java is ~1000 km from Flores). It is not a stretch to speculate that H. erectus arrived on Flores, was isolated, and evolved smaller stature over time, thus becoming H. floresiensis, a contemporary of modern man.

However, additional primitive features of the foot, such as long, curved and robust lateral toes; a short big toe; and a weight-bearing process on a crucial bone, imply that H. floresiensis was better suited for walking than running. This feature is important because modern feet first appeared in H. erectus, thus suggesting that H. floresiensis split off from H. erectus before the evolution of the modern foot.

Other primitive anatomical features, such as a relatively short, very curved clavicle; a straight humerus that lacked the normal degree of twisting between the shoulder and the elbow; an ape-like wrist; flared iliac blades, relatively small joints and relatively short leg bones, all imply a close relationship to early Homo or even Australopithecines.

If the article is to be believed in full, and this is the point I have most difficulty swallowing,

"these new findings raise the possibility that the ancestor of H. floresiensis was not Homo erectus but instead some other, more primitive, hominin whose dispersal into southeast Asia is still undocumented."

So we have another possible Out of Africa event! First, H. floresiensis (or its immediate ancestor). Then H. erectus. Then H. sapiens.