Vitriolic Abuse Of Anita Sarkeesian: Why The Games Industry Needs Her
By The Conversation | September 22nd 2014 06:00 AM | Print | E-mail 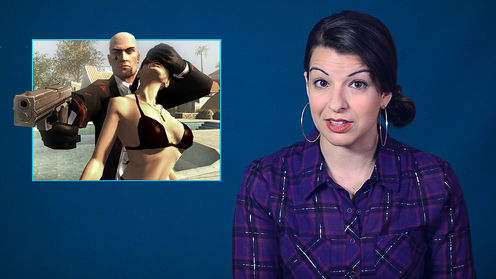 Sarkeesian has been the focus of much online hatred since she started her website Feminist Frequency in 2009. Credit: Anita Sarkeesian

Three weeks ago, well-known feminist gaming critic Anita Sarkeesian was forced to leave her San Francisco home due to an ongoing tirade of abuse and threats. Members of a vocal minority of online trolls had threatened to kill her parents, drink her blood, and rape her – all while publishing her personal details online.

Why is Sarkeesian a target for so much online hatred and vitriol - most of it misogynistic in nature? In short, because she actively critiques sections of the gaming community, and the sexist content of some games.

Sarkeesian has been the focus for much online hatred and vitriol ever since she started her website, Feminist Frequency, in 2009. But the animosity directed towards her exploded in 2012, after she launched a Kickstarter fund-raising drive for her Tropes vs Women In Video Games web series. As she documents on her site, she was targeted by a vicious “cyber-mob” of people determined to silence her.

Sarkeesian was the victim of image-based harassment (Photoshopped pornographic-style images of her were passed around various internet forums, and personally emailed to her), and attempts were made to hack her email and social media accounts.

Most disturbingly, an interactive game was created in her likeness, in which players were encouraged to “beat up Anita Sarkeesian” by virtually punching an image of her face until it was black and blue.

When Sarkeesian was besieged again recently, it was due to both her involvement in #gamergate (a wider, somewhat messier debate currently underway revolving around the long-standing issues of sexism and misogyny in the gamer community), and her posting of the latest video in the Tropes vs Women In Video Games series (see below) which explores women as background decoration in video games.

The posting of this latest video resulted in Sarkeesian being driven from her home by the “very scary threats” that were made against her through social media platforms such as Twitter.

So why is there such a persistent hate campaign against Sarkeesian – one that has stretched across two years, multiple websites, and a wide range of gaming communities? Partially, the answer is because sections of the internet allow it to continue.

More specifically, websites such as Twitter, 4Chan and Reddit have not been adept at countering the attacks made on women such as Sarkeesian. These websites do not actively moderate or shut down users that threaten her. Instead, it is left to Sarkeesian to report each and every one of those people to both the social media sites and the relevant authorities.

As Sarkeesian herself points out:

none of the social media services I use have adequate structures built in to effectively deal with cyber-mob style harassment … these issues need to be taken seriously by the institutions that make up our online social media.

Is it all a game?

But the tightening of methods to report abuse on social media services isn’t the only way to counter-attack the online abuse of women in the gaming community.

Disturbingly, some of the people who attack women like Sarkeesian see their abuse as a form of “game”. Sarkeesian identified as much in her 2012 TEDxWomen talk when she said that she had “accidentally become the villain of a massive online game in real life”.

The logic of her detractors seems to lie in their attacks being a part of this “game” - one in which if they bombard her credibility, her personality, her appearance, and her sexuality, they will eventually silence her.

Except it’s not working. As noted across a variety of blogs, articles, and websites, the face of gaming is changing. Women now make up almost half of all gamers.

People of colour, people of various genders and sexualities, people of various abilities, and a host of representatives from other communities are now pouring through the front door of the gaming palace. Straight, white, male gamers are increasingly outnumbered.

Sarkeesian’s abuse at the hands of select members of the gaming community has now become so well-known that an online law know as “Anita’s Law” has been coined.

Anita’s Law states that whenever an online discussion about sexism or misogyny takes places, disproportionate displays of sexism and misogyny will quickly emerge within the same discussion.

The disturbing responses to Sarkeesian’s critiques of the misogynistic, sexist content of various video games demonstrates the gaming community truly needs voices such as hers to continue to speak up and speak out.

Let’s just hope Sarkeesian can continue to devote her time to an industry and community that seems to so desperately need it.

Jessamy Gleeson, PhD student and sessional teacher at Swinburne University of Technology, does not work for, consult to, own shares in or receive funding from any company or organiaation that would benefit from this article, and has no relevant affiliations.

9/22/2014: Edited to include attribution to the original artist.