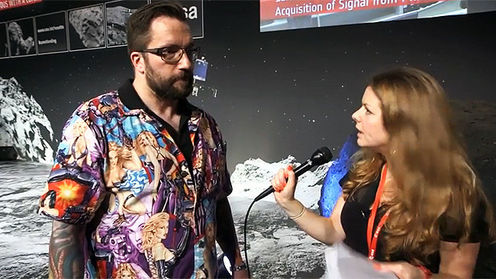 The shirt Matt Taylor wore while being interviewed about the Rosetta space mission set off a media and online shirtstorm. Youtube/ ESA

By Jamilla Rosdahl, University of the Sunshine Coast

The European Space Agency made history in November by landing a spacecraft on a comet. However, a furious news debate quickly erupted about the shirt worn by 42-year-old British chief of science for the Rosetta space mission, Matt Taylor. He was interviewed just as the Philae lander was touching down on comet 67P after more than ten years in space, but his shirt got the attention.

The shirt featured a PVC-clad, gun-toting cartoon blonde in sexualised poses. It landed Taylor in big trouble. Many were upset about his choice of clothing for the event.

Female scientists were among those left feeling angry. 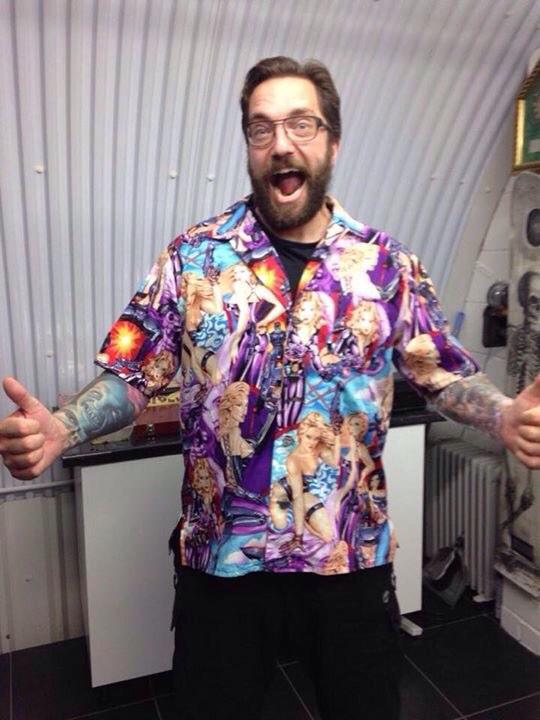 There were condemnatory headlines, such as this one by Verge:

I don’t care if you landed a spacecraft on a comet, your shirt is sexist and ostracising (that’s one small step for man, three steps back for humankind).

In a later interview, Taylor broke down in tears and apologized.

The “shirtstorm” sums up rather well the tensions between masculinity movements that feel that men are being blamed for women’s experiences of mistreatment and feminist movements that promote equality between men and women.

Some men’s rights activists even argue that women have no-one to blame but themselves and feminism.

Why do these “masculinity movements” sit so awkwardly with feminism?

The founder of Australian blog A Voice for Men, declared the aim of the men’s human rights movement (MHRM) is what “feminism promised but failed miserably to deliver”. He says that “feminism chides men and infantalizes women” and “there are no princesses in the MHRM”.

Men’s groups such as this blame feminism for some men’s experiences of feeling isolated and misunderstood. They believe men should express some deep and masculine, instinctual “male” essence.

In Australia, there are debates about fears of a masculinity in crisis and that men are no longer “real” men. Ideas about manhood are changing and this can be confronting. Precisely because of its highly contested and anxious nature, men’s movements have recently been put under the academic lens.

What do men’s movements stand for?

Although often seen as a homogeneous and static movement, there are a number of different men’s movements. These can be loosely located as masculinist or pro-male, anti-feminist, anti-women or pro-feminist. They reveal the changing historical landscape as well as the deeply cultural and political environment of men’s experiences.

The men’s liberation movement emerged in the mid-1970s in response to the feminist movement. By the late 1970s, some men’s movements included beliefs that women possessed “real” power in the world.

According to Chris Haywood, activist and writer on gender, the men’s rights lobby is a type of masculinity politics that currently seems to have the widest resonance. It can be located in Britain and America as well as in Australia.

Controversial men’s rights activists include Neil Lyndon, David Thomas and Warren Farrell. Farrell, the author of The Myth of Male Power: Why are men the disposable sex?, believes men are the victims of feminism and it has gone too far.

Farrell argues that while men’s responsibilities have increased, they have lost rights in areas such as marriage and divorce, and child custody. To him, modern legislation is over-protective of women and their rights and discriminates against men.

Kay Hymowitz, a conservative American social commentator, echoes the above cries. Hymowitz, who has been heavily critiqued for her stereotypical, “white” and heteronormative portrayals of men and women, argues that without the old scripts to follow, men have become increasingly juvenile and inarticulate.

In her book, Manning Up: How the Rise of Women Has Turned Men into Boys, Hymowitz expresses her concerns about the “increase of child-men”, “single mothers” and “fatherless homes”.

The making of men

Men’s movements are different to the women’s movement because they tend to be sporadically organized and riddled with contradictory positioning. They often resurface amid social upheavals such as changes in job security.

Despite the tensions between men’s rights advocacy and feminist movements, much of the language of this conversation derives from feminist theory. Feminism provides a social explanation of the making of men.

It highlighted a deliberate effort to theorize men’s experiences that boys learn to become men and are pressured to take on a masculine identity.

Although various MHRMs are said to share a commitment to reforging bonds between men and to overcoming men’s fear of each other, some uphold a masculinist role that separates them from other men who don’t conform to narrow views of maleness.

Australian gender theorist R. W. Connell argues that the MHRM offers a highly simplified view of the problems some men face. Potentially it serves to uphold stereotypical and damaging ideas about masculinity, rather than attempting to break these down. On Youtube, Terraja Lee ‘The Amazing Atheist’ Kincaid is a prominent denouncer of feminism. The Amazing Athiest/Youtube, CC BY-NC

The MHRM hasn’t contributed to developing critical masculinity studies of men. Instead, it continues to prop up false beliefs, such as that feminists and other rights activists are anti-men.

Any identities for men that encourage men to be aggressive, violent and in control, reinforcing notions that men must be tough and hide emotional expressiveness, are severely damaging to men’s health. This limits men’s relationships with their partners, children and friends. Men who perform hegemonic masculinity pay a very high price for this power.

The cost of traditional masculinity

Pro-feminist gender theorists such as Michael Kimmel and Michael Messner argue that hype about “faulty men”, circulated by popular media commentaries, should be seen as effects of much larger social transformations.

These include fragmentations, technological advancements, job insecurities, fears, heightened vulnerability, risks and cultural tensions. Gender theorists have described this as an imagined crisis that appears at moments of wider disturbances in the social fabric.

In troubled times, minority groups often bear the brunt of the majority’s sense of moral panic. For example, in various points in Australian history, we have seen the generating of narrow, nationalistic and racist identities such as the “indigenous savage” (1788-1860), the “Chinese scab” (1851) and, more recently, the “Muslim terrorist”.

Are ideas about maleness changing? Male dancers do not always conform to codes of maleness. Maksim Shmeljov/Shutterstock

Ideas about maleness are changing and will continue to change. Gender is highly problematic and created within culture – it’s not a natural or biological, fixed reality. Rather, gender is created within a heteronormative system of unequal, contradictory and shifting power relations between groups.

In the current gender social order, people with white, male bodies tend to enjoy some privileges. But they also pay a high price for not adhering to narrow codes of masculinity. Men who don’t conform might be called “princesses”, “sissies” or “gay”.

Before we give into public anxieties or the blame games of popular understandings of gender identity, we must critically ask: why are we so quick to separate men and women?

So is masculinity real?

Masculinity isn’t real but its effects are very real. In other words, it’s real insofar as we believe that the identity exists. And it can only exist against the idea of a subordinate femininity. The concept of masculinity is a myth. Fotoatelie/Shutterstock, CC BY-NC

When dominant masculinity is performed, it sets up ideas that men should be strong, aggressive and in control and women should be weak, passive and powerless.

But men’s ideas about who they think they are are far from static - they often change many times over a lifetime. Masculinity is a politically charged and contested concept because it’s created and used by people.

But we can use the concept of masculinity to explain why some men dominate other men (and women) who don’t fit or conform to this model and why some men feel isolated and lonely. Men who don’t fit might include men who perform femininity, black men, poor and working-class men, queer men, transgender, transsexual and intersex people.

Most feminists and pro-feminist men don’t blame individual men for white, male privilege. Instead gay liberationists, men of color and pro-feminist men are joining feminists in the challenge to dominant masculinity. They do so because it includes risk-taking behavior (such as speeding and alcohol or gun-fueled violence) rape, sexual harassment, sexism and homophobia.

If some young men are socialized into acting out our culture’s fantasy of the “real man”, then dominant ideas such as aggression, competitiveness and fear of intimacy can also be rethought and relearned.

In uncertain times of perpetual wars and risk, we have to ask ourselves: if fear and hatred towards others separate us, then what might inspire solidarity and global justice? Men and women can and should create political alliances that support our shared needs.

We are often told that women and men are different, but we share similar needs: to be loved, respected and included. Narrow definitions of masculinity don’t allow for this.

Jamilla Rosdahl , Lecturer in Gender Studies at University of the Sunshine Coast, does not work for, consult to, own shares in or receive funding from any company or organization that would benefit from this article, and has no relevant affiliations.