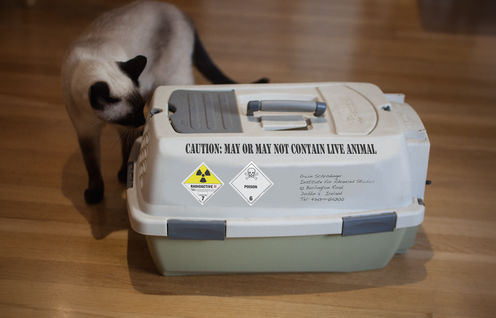 How much do you accept science, cat? Robert Couse-Baker, CC BY-SA

By Eric Cavalcanti, University of Sydney

It’s a century-old debate: what is the meaning of the wave function, the central object of quantum mechanics? Is Schrödinger’s cat really dead and alive?

I was recently involved in an experiment conducted by Andrew White’s Quantum Technology Lab at the University of Queensland that has now provided the most significant evidence on that question in years.

And it doesn’t look good for the cat.

To understand the importance of this result, we need to delve into its history. At the root of quantum physics there is something of a reality crisis. Multiple interpretations of the theory exist, and they paint very different pictures of the world. One of the major contentions centers around what we should make of the quantum wave function.

In short, the wave function describes the quantum state of a physical system. But unlike in classical physics, where a complete specification of a state determines all of its properties (for example, a particle’s position and velocity), the quantum state in general only gives probabilistic predictions.

In fact, the wave function seems to describe bizarre situations, like physical systems existing simultaneously in multiple states, such as different positions or velocities. It gives very precise probabilities for the possible outcomes of laboratory experiments, but it defies an intuitive interpretation.

Some of the founders of the theory, such as physicists Niels Bohr and Werner Heisenberg, suggested that until an observation of one or another property is made, questions like “where is this particle, really?” simply don’t make sense.

Under this view, it’s not that the particle is really here or there (and we just don’t know until we look). Rather, for Bohr the very meaning of “position” depends on the existence of a measurement that detects it.

Physicist Erwin Schrödinger's famous thought experiment was designed to show how, if quantum mechanics is taken literally and to its ultimate implications, even macroscopic systems, like cats, would be in such “superpositions” of states – such as the cat being both dead and alive – which is an apparently absurd conclusion.

It’s all in your head

An indeterminate reality was unacceptable for Albert Einstein, who famously said: “Do you really believe the moon exists only when you look at it?” Einstein believed instead that the wave function should be understood as representing our limited information about the actual state of physical systems.

A first blow to Einstein’s view came in 1964, when John S Bell showed that any model that describes an objective reality underlying quantum mechanics must include some sort of non-local connection between distant systems, in an apparent violation of Einstein’s own theory of relativity.

In 2007, however, Robert Spekkens from the Perimeter Institute published a seminal work showing that it was possible to reproduce many of the counter-intuitive aspects of quantum theory with a model where the wave function plays the “epistemic” role Einstein longed for.

Other fragments of quantum theory were later shown to fit similar models, but the question was open whether or not this was possible for all of quantum theory. Could Einstein’s dream be revived? To understand what this kind of model is, imagine I hold two decks of cards: one contains only red cards, the other only aces, and I ask you to pick a card from one, without knowing which is which.

In an epistemic interpretation, the wave function would play the role of the deck you pick the card from. It gives you some information about the card – like if you pick from the aces deck, you’re sure to pick an ace of some sort – but this information is not itself a property of the card. In fact, it is possible that you have picked an ace of hearts, which is compatible with both decks.

A wake-up call came in 2012, when Matthew Pusey, Jonathan Barrett and Terry Rudolph showed that in any objective model of quantum theory, the wave function must be a real property of individual systems, unlike the deck of cards. But, their theorem had an extra assumption that has called the implications of the theorem into question.

However, a series of theorems published within the last year, starting with work from myself and colleagues, puts strong bounds on the viability of epistemic models, even without those extra assumptions.

But if it’s an ace of hearts or an ace of diamonds, it could have come from either. Counting the cards in the decks, we can determine how often this is supposed to happen.

In an epistemic interpretation, the fact we can’t distinguish quantum states should be at least partially accounted for in this way. But the theorems show that this explanation simply cannot work. For some specially constructed quantum states, the “decks” corresponding to them cannot have anywhere near the right amount of cards in common, so to speak.

These predictions were partially confirmed by the experiment I was involved with, performed by Martin Ringbauer and the Brisbane team led by Alessandro Fedrizzi. They followed an improved version of our theorem due to Cyril Branciard, a co-author in the study.

The experiment involved preparing single photons (particles of light) in those specially designed states and subjecting them to a number of alternative measurements. The results give bounds on how well a model like the one outlined above can describe the statistics they observe.

This represents the first large class of quantum models to be ruled out since Bell’s theorem started being tested in the 1980s.

If further experiments confirm the implications of the theorems, viable epistemic models of quantum mechanics will be essentially ruled out. If we want an objective reality, à la Einstein, the wave function must be real, dead and alive cats and all.

But there are alternatives. One could be to reconsider assumptions of the framework used to derive the theorems, perhaps by introducing backwards-in-time causality or parallel universes. However, no approaches of this form have yet managed to produce an epistemic interpretation.

Or else, we can deny that a purely objective description is possible at all. However it may be, the weirdness of quantum mechanics is here to stay.

Eric Cavalcanti, ARC DECRA Fellow at University of Sydney, receives funding from the Australian Research Council. This article was originally published on The Conversation. Read the original article.