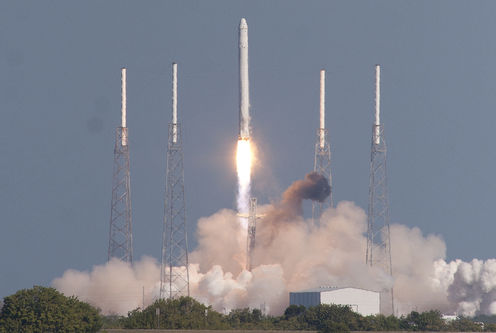 SpaceX is attempting a huge feat in spacecraft engineering.

It is seeking to land the first stage of its Falcon 9-R rocket on a floating platform at sea. Normally this would end up at the bottom of the ocean. If successful, SpaceX will shake the rocket launch market, by shaving millions of dollars off launch costs.

Whatever the outcome, the launch represents the culmination of a number of remarkable achievements in rocket science. It marks new developments in restarting rocket engines, orientation control, guidance and navigation, thermal protection and of course, deploying landing gear.

SpaceX’s track record in the industry so far has been phenomenal. If other commercial providers haven’t woken up to the competition, this launch might force them to pay attention.

What goes up must come down

Today’s rockets are one shot wonders. They burn up fuel in a few minutes and splash down into terrestrial oceans, having put their payload on the right trajectory. This is wasteful and that is why scientists have dreamt of building reusable launch vehicles.

The holy grail of rocket launchers is a concept referred to as the single stage to orbit (SSTO) vehicle. The idea is to use a reusable launch vehicle (RLV) which has the capability to deliver a payload to orbit, re-enter the Earth’s atmosphere and land, where it can then be refuelled. The process can then be repeated with a short turnaround.

Although some steps towards this are being taken in the UK, with development of the SABRE rocket engines for the Skylon SSTO vehicle, achieving such a development with reliability and within reasonable cost, remains a challenge both in terms of materials and engine technology. The SABRE engine makers propose to overcome the energetic barrier by taking at least some of the oxidizer for the combustion process from the atmosphere, switching from air-breathing to rocket-fed combinations.

The reality is that achieving orbit with a single vehicle and a pure rocket engine, whereby all of the fuel and oxidizer for combustion is stored on-board the vehicle, remains out of reach. Even with a propellant mass of 90% of the entire vehicle weight, expendable launch vehicles must tread an extremely fine line between the masses of the propellants, the supporting vehicle and the payload. This means that the payload mass which achieves final orbit is typically no more than 2% to 4% of the initial weight of the launcher.

The only way we can currently achieve orbit is by stripping away the needless mass of the supporting structure and fuel tanks as the launcher’s fuel begins to empty. This creates a multistage rocket. These stages may be in series, stacked one on top of the other, as in SpaceXs’ Falcon 9-R rocket, or in parallel as in NASA’s Space Shuttle.

NASA’s Space Shuttle was an attempt at producing a semi-reusable launcher, by re-entering and landing the orbiter, as well as recovering the solid rocket boosters by parachute. However, the immense recurring costs of the programs and the Challenger and Columbia Shuttle disasters, with a loss of 14 astronauts, highlighted the difficulty in achieving true and reliable reusability.

It seems madness that we prefer to discard some of the finest and costliest examples of human science and engineering to the bottom of the ocean. Yet given the limitations, governments and agencies seem unable to consider recapturing them and reusing the technology. So for the past 50 years, expendable launch vehicles (ELV) have been the staple diet of the commercial launch industry.

SpaceX’s journey so far hasn’t been without difficulty. The launch is its third attempt at testing out this technology. The first two launch attempts were scrubbed because of last minute faults.

And even if SpaceX succeeds, it needs to prove that the technology is an economically feasible alternative to expendable launch vehicles. To do that it will need to avoid the long and expensive refurbishment activities that plagued the Space Shuttle program.

This will not be easy. Re-usability means that the Falcon 9-R carries within it greater complexity, systems and mass, reducing the overall payload and decreasing its performance.

However, SpaceX is not shy of challenges and is pressing ahead with a myriad of achievements at breakneck speed. The speed at which SpaceX has moved from concept to reality has barely given time to other commercial players to assess the impact SpaceX will have on their business plans, let alone react to them.

Angelo Niko Grubišić, Lecturer of Astronautics and Senior Propulsion Research Fellow at University of Southampton, does not work for, consult to, own shares in or receive funding from any company or organization that would benefit from this article, and has no relevant affiliations.