Scientists know very little about the matter that makes up the galaxies in the Universe. About 20% of the matter in galaxies is visible or baryonic: subatomic particles like protons, neutrons and electrons. The other 80%, referred to as “dark matter”, remains mysterious and unseen.

In fact, it may not exist at all. “Dark matter” is just a hypothesis. Physicists and astronomers may be chasing a phantom – but that doesn’t stop us from looking. Why? Because if dark matter isn’t real, then the behaviour of the stars, planets and galaxies makes little sense.

Today dark matter – and its cousin, dark energy – are the main pillars of a cosmological model called Lambda Cold Dark Matter, or Lambda-CDM. This model stresses that dark matter affects baryonic matter only via gravity. It does not interact with the electromagnetic force, meaning that it does not absorb, reflect or emit light. 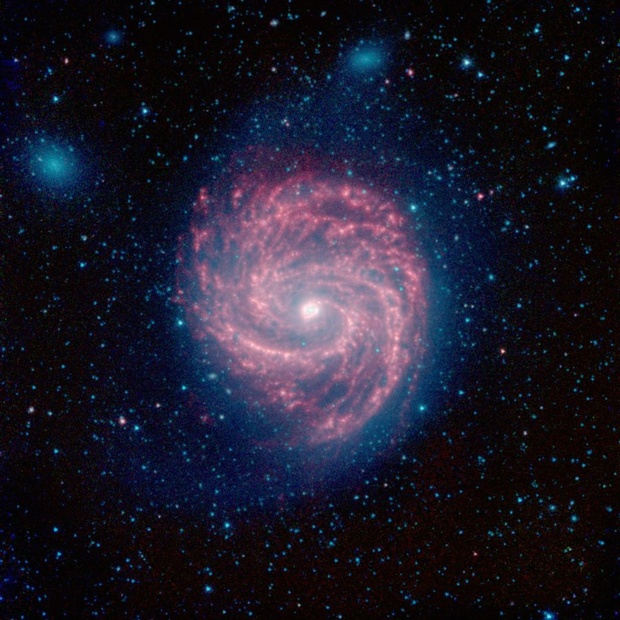 In a recent study, published in Astronomy and Astrophysics, we provide further evidence to support the existence of dark matter halos around early galaxies (when the Universe was half of its current age). We also challenge some assumptions about it. This is a way to deepen our understanding of the Universe and its galaxies.

Origins of the theory

In the 1970s, astronomers Vera Rubin and Kent Ford unveiled the theory of dark matter. They weren’t just taking a shot in the dark: there had long been a debate about why stars, planets and galaxies behaved in certain ways. For instance, why aren’t stars and gases constantly flung far and wide into outer space? What sort of glue keeps galaxies intact, exerting a gravitational effect on everyday baryonic particles?

Scientists also wondered why objects far beyond the centre of a galaxy orbit at much the same speeds (or velocities) as objects closer to the centre. This flies in the face of Newton’s law, which suggests that stars and gas should be slowing down the further they are from a galaxy’s centre. The greater abundance of stars and gases near the core should provide the necessary gravitational force that speeds up the stars and gas. The more thinly distributed they are at the edges of the galaxy, the less the gravitational force – and so, stars and gas should slow down. But observations suggest that they don’t.

To account for these discrepancies, Rubin and Ford argued that every galaxy is engulfed by a large halo of dark matter, providing the unaccounted-for mass. Dark matter, they claimed, provides around 85% of the matter within any one galaxy. Its dominant presence throughout galaxies arises from the fact that the stars and hydrogen gas are moving as if governed by an invisible element.

Their theory hasn’t been universally embraced. Some scientists have argued that dark matter doesn’t exist.

But we and many others agree with Rubin and Ford. Dark matter exists because it explains so much. As one writer put it:

many [physicists] would happily dismiss the idea – if it didn’t work so well.

Looking way back into the Universe

For our new study we observed about 260 spiral-shaped star-forming galaxies some seven billion light years away. This is essentially a glimpse into the past. It is estimated that these galaxies existed when the Universe was half its present age of around 13.8 billion years. They appear to us now as no more than light signals. Spiral galaxies, of which our Milky Way is one, are characterised by the distinctive coiled, spiral arms of stars and gas clouds.

Our aim was to observe and determine, and then compare, the distribution of mass in these distant spiral galaxies with more recent, nearer galaxies of more or less the same characteristics.

Some recent studies have suggested that the earlier star-forming galaxies appear to be deficient in dark matter when compared to more recent or local ones. This has led some researchers to assert that dark matter plays a much smaller role in early star systems than in today’s galaxies. Our findings refute this suggestion.

We were able to confirm that the earlier galaxies we studied have the trademark halos of dark matter that build up from the centre and maintain a constant density up to a certain radius. This is largely in keeping with the standard scenario of dark matter observed in the galaxies of the local Universe. A surprise finding, however, was that these halos are much more compact than those galaxies closer to our Milky Way. This suggests that distribution of dark matter within a galaxy expand slowly over time. But how is this process powered?

Our conclusion is that this phenomenon illustrates a direct interaction between dark matter particles and the everyday baryonic particles. This alters the density of the halos – and in doing so, goes beyond just the textbook gravitational relationship.

These findings don’t provide all the answers to all or even a few of the questions that exist about dark matter. But it certainly narrows the long search for dark matter particles.

For those of us equally mesmerised and confounded by dark matter, there may well be a light at the end of the tunnel. New technology is helping us to better understand the Universe and its dynamics.

Finding answers will mean peering ever deeper into the centre of these earlier and “younger” galaxies. The new James Webb Space Telescope, launched at the end of 2021 and now orbiting some 1,500,000 km beyond Earth’s orbit around the Sun, may help in this regard.

By Gauri Sharma, SARAO Postdoctoral Fellow, University of the Western Cape. This article is republished from The Conversation under a Creative Commons license. Read the original article.