What is dark matter? No one can say because it can't be detected or measured, but in science inference can help and we know that something is making gravity not work properly at the large scale.

What we know as matter - stars, planets, us and other organisms - is baryonic matter, but it is only a small fraction of the universe. The rest gets lumped under blanket terms like dark energy and dark matter. Dark matter must be a form of matter the particles of which move slowly in comparison with light and interact weakly with electromagnetic radiation.

The cold dark matter hypothesis is a placeholder to help explain how the universe evolved from its initial state to the current distribution of galaxies and clusters, the structure of the Universe on a large scale. In any case, it is unable to satisfactorily explain certain observations, but a new paper in Nature seeks to do some reinterpretation to help. 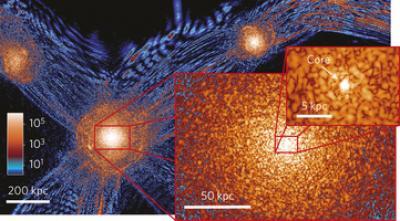 A comparison of the radial density profiles of the galaxies which the researchers have created by displaying the soliton in the centre of each galaxy with a halo surrounding it. The solitons are broader but have less mass in the smaller galaxies. Credit: Thomas Broadhurst

As Ikerbasque researcher Thomas Broadhurst explains, "guided by the initial simulations of the formation of galaxies in this context, we have reinterpreted cold dark matter as a Bose-Einstein condensate". So, "the ultra-light bosons forming the condensate share the same quantum wave function, so disturbance patterns are formed on astronomic scales in the form of large-scale waves".

This can be used to suggest that all the galaxies in this context should have at their center large stationary waves of dark matter called solitons, which would explain the puzzling cores observed in common dwarf galaxies.

The research also makes it possible to predict that galaxies are formed relatively late in this context in comparison with the interpretation of standard particles of cold dark matter. The team is comparing these new predictions with observations by the Hubble space telescope.

(a) This figure shows that a comparison of the distribution of matter is very similar on a large scale between wave dark matter, the focus of this research, and the usual dark matter particle.
(b) This figure shows that in galaxies the structure is very different in the interpretation of the wave, which has been carried out in this research; the research predicts the soliton of dark matter in the center surrounded by an extensive halo of dark matter in the form of large "spots," which are the slowly fluctuating density waves. This leads to many predictions and solves the problem of puzzling cores in smaller galaxies. Credit: Broadhurst

The paper may open up the possibility that dark matter could be regarded as a very cold quantum fluid that governs the formation of the structure across the whole Universe.

Source: University of the Basque Country
News Articles
More Articles All Articles
About