News Staff
A new simulation that explains the collision between clusters of galaxies known as "El Gordo" also challenges popular thinking on the blanket term for undetected 'dark matter'.

In general, galaxy clusters grow in size by merging with each other due to gravitations forces despite the expansion of the universe. El Gordo is the biggest known cluster of galaxies, and is in turn the result of the collision between two large clusters. The simulation believes that the collision process compresses the gas within each cluster to very high temperatures so that it is shining in the X-ray region of the spectrum. In the X-ray spectrum this gas cloud is comet shaped with two long tails stretching between the dense cores of the two clusters of galaxies.

This distinctive configuration has allowed the researchers to establish the relative speed of the collision, which is extreme (~2200km/second), as it puts it at the limit of what is allowed by current hypotheses for dark matter. These rare, extreme examples of clusters caught in the act of colliding would challenge the accepted view that dark matter is made up of heavy particles, since no such particles have actually been detected yet. In the opinion of Tom Broadhurst, the Ikerbasque researcher of the UPV/EHU-University of the Basque Country, "it's all the more important to find a new model that will enable the mysterious dark matter to be understood better." 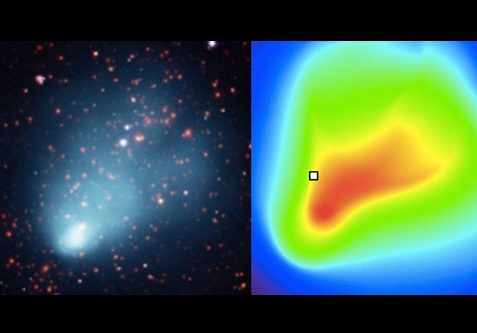 An image comparing the data showing the many galaxies and the X-ray emission from the hot gas (left) with the model of the hot gas (right). The "comet" shape of the X-ray data is well reproduced by the model

The recent work entailed interpreting the gas observed and the dark matter of El Gordo "hydrodynamically" through the development of an in-house computational model that includes the dark matter, which comprises most of the mass, and which can be observed in the Xray region of the visible spectrum because of its extremely high temperature (100 million kelvin).

Their computational solution for this collision because of the comet-like shape of the hot gas, and the locations and the masses of the two dark matter cores that have passed through each other at an oblique angle at a relative speed of about 2200 km/s. This means that the total energy release is bigger than that of any other known phenomenon, with the exception of the Big Bang.