Why Climate Scientists Shouldn't Testify Before Congress
By The Conversation | January 27th 2015 11:25 AM | Print | E-mail 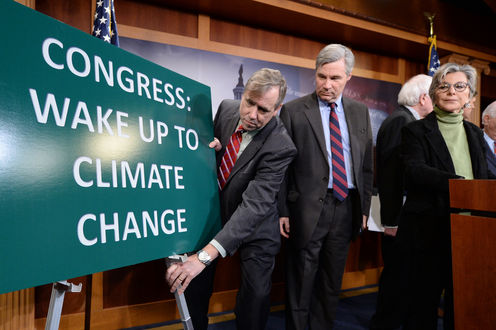 Climate scientists will be either ineffectual or counter-productive if they testify before Congress. EPA

Western liberal democracies believe that in difficult political decisions science serves as a referee and arbiter of truth.

Scientific knowledge can indeed inform and narrow the scope of policy choices, for example in the teaching of evolution in public schools. But a staunch belief in a fully rational society, together with a political culture of adversarialism and the skepticism of vested interest groups can also create a fertile soil for controversy and a political deadlock.

While we have come to know a lot about interest groupsʼ smoothly oiled denial campaign to influence public opinion on climate change, very little has been said about the institutional mechanisms exacerbating the political stalemate between Democrats and Republicans.

In order to gain political support in the US, scientists are frequently asked to articulate, represent and defend their knowledge in congressional hearings. To this end, Democrats and Republicans choose experts independently. They then put the scientists under oath and start their cross-examination. Truth, they insist, would emerge only from aggressive testing in an adversarial forum.

Of course, the purpose of congressional hearings on science most often is not to actually expand or clarify the scope of choice available to decision makers, nor to convince neutrals or to win over the other side to one’s point of view. Rather, these hearings are meant to show and confirm solidarity with one’s own side. In this sense, they mark a breakdown of democratic deliberation.

The scientization of politics

In their floor speeches Republicans and Democrats subscribe to the so-called linear model of science and society. This describes a sequential process by which basic or fundamental research results in technical innovation and public policies. There’s little empirical evidence this is how things actually work but nonetheless it remains the organizing principle of congressional hearings on scientific matters.

Paired with the belief that truth emerges from aggressive testing, congressional hearings create the perfect conditions for a political opponent to deconstruct the basic of fundamental research. Such often openly hostile hearings date back to at least the DDT controversy in the 1960s when Democrat representatives invited legendary ecologist Rachel Carson to testify on the petrochemicalʼs detrimental effects on the environment. Democrats wanted Carson to make a scientific case for the regulation of the petrochemical industry, and thereby (unwittingly?) provoked the skeptical deconstruction of environmental science.

When Republicans invited experts who questioned the presented consensus, a political debate quickly turned into a narrow technical one about the scientific method, uncertainties, and the scientistsʼ alleged conflict of interests. DDT skeptics from the right adopted a strategy the left had pursued for many decades: they employed a Marxist critique of the social and economic foundation not of capitalist but of environmentalist science.

The US Environmental Protection Agency (EPA) was able to frame its eventual ban as a rational decision, circumventing a value-laden discussion about the merits of a system that has allowed a few industries to benefit at the cost of the general public

To be sure, the Democrats succeeded because their political program of action could be brought into alignment with science: the decision made in the 1970s was politically and economically viable as the industry moved overseas to create new markets for their products. Motivated by politics, not science? EPA

Science can’t always be brought into alignment with those wider political and economic rationales. Public opposition to major companies has kept GM food out of European supermarkets, for example. It doesn’t matter that the purported health risks cannot be scientifically substantiated. For politicians, the potential loss of credibility from being seen to go along with Monsanto and co is not worth the scientific upside.

Congressional hearings on climate science continue in that tradition. Since the late 1980s the Democrats have convened hearings and invited “their” experts in the hope that science would legitimize their policy proposals. We have all heard of climate scientist James Hansen’s emphatic 1988 testimony that “it’s time to stop waffling so much and say that the evidence is pretty strong that the greenhouse effect is here.”

In turn, the Republicans invited experts who issued statements questioning respective claims. This happened frequently under the Bush administration, for example in hearings convened by the Republicans James Inhofe, Ed Whitfield and Joe Barton. Seizing the Republican majority in both chambers, their hearings on the so-called hockey stick climate reconstruction functioned as a veto put on a legislative process that has been facing resistance long before esoteric scientific questions attracted politicians’ attention. Unsurprisingly, when the Democrats regained a majority they fought back. Two of the latest hearings featured briefings grandly entitled “A Rational Discussion of Climate Change: The Science, the Evidence, the Response” and “Undeniable Data: The Latest Research on Global Temperature and Climate Science”. Convened by Democrats Edward Markey and Henry Waxman these hearings should set the scientific record straight and reinforce the difficult legislative process.

But subpoenaing testimony from intimidated scientists in order to influence the policy process has proven ineffective at best – since neither party takes their opponent’s expert advice seriously – and counter-productive at worst – since it simply reinforces the stalemate between Democrats and Republicans. On a discursive level these hearings havenʼt achieved much.

The idea that truth is best served through adversarialism and the clash of competing viewpoints before a judge and jury turns esoteric scientific controversies into fully fledged public debates. This adversarial procedure is typical for how the litigious US society warrants scientific knowledge for policy-making. It has come to characterize the climate change debate.

By contrast, in the UK the assumption of trust and mutual respect still guides the relationship between scientific advisers and government. The option of subpoenaing testimony from scientists is rarely exercised. Instead, in a consensual decision, parliament invites and asks for advice a chief scientist who is recognized as the authoritative and trusted voice on scientific matters of fact.

This does not mean that the goals set in the UK Climate Change Act are achievable. They are probably not. But the procedure by which the UK uses science to influence policy doesnʼt drive a wedge between scientists and politicians. What humble and sane climate scientist would still want to accept an invitation to Congress?

Mathis Hampel, Research Associate, Science Society&Sustainability at University of East Anglia, does not work for, consult to, own shares in or receive funding from any company or organization that would benefit from this article, and has no relevant affiliations. This article was originally published on The Conversation. Read the original article.