People are fascinated by the unknown, by the possibility that there are things out there that are yet to be discovered.

We think that most of our planet has been mapped by satellites and continents have been thoroughly explored. Although scientists estimate that millions of species are yet to be discovered, these are mostly assumed to be very small animals, especially invertebrates.

Long gone are the days of famous explorers, when the borders of uncharted lands were marked with warnings such as “here be dragons”. And yet, many of us, still hope that some amazing, unexpected creatures may be hiding somewhere.

These creatures are the so-called “cryptids”, animals such as the Himalayan Yeti, north American Bigfoot or Australia’s own Yowie.

Perhaps the most famous is the Loch Ness monster, which has been back in the news recently, thanks to the discovery of a nine-meter long object at the Scottish lake. Engineers prepare to tow Munin, an intelligent marine robot, on Loch Ness in search for the mysterious monster. REUTERS/Russell Cheyne

A team of Norwegian researchers found what was initially thought to be evidence for the existence of the monster, informally known as “Nessie”.

But this evidence later turned out to be just a prop from the 1970 movie The Private Life of Sherlock Holmes, which sank after its buoyant humps were removed.

This team of researchers was using some advanced sonar technology in the hope of unveiling the mystery of Loch Ness once and for all. But the prop is all they have found so far.

Certainly, many people were disappointed. But from a scientific perspective, what are the odds that a prehistoric reptile actually inhabits the depths of Loch Ness?

Let us examine the arguments that can be reasonably put forward for the existence of a “monster” in Loch Ness.

The first written report of an unusual aquatic creature in the proximity of the lake dates back to the seventh century. But medieval texts aren’t terribly reliable, as they often include monsters and supernatural creatures.

We have to wait until the end of the 19th century for the next sighting.

Could this have affected the sightings that came in the years that followed?

If we exclude the plethora of anecdotal accounts that occurred in the 20th century, the “evidence” so far is in the form of photographs and movies, which sceptics dismiss as floating logs, seals or hoaxes. Then there are sonar images, which unbelievers claim to represent fish schools, algal blooms or echoes from submerged cliffs (or even movie props). 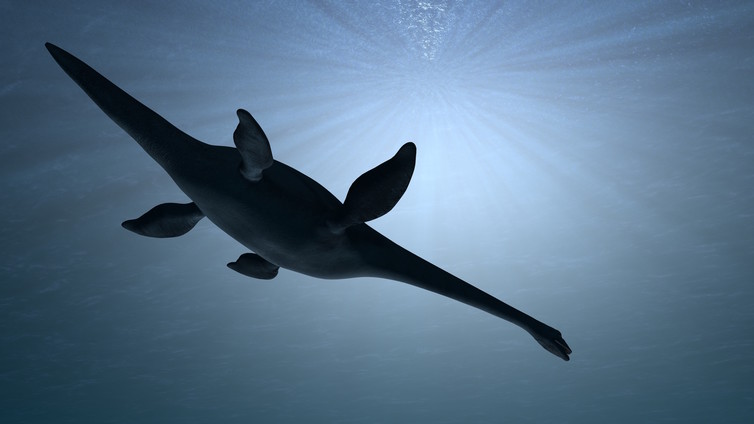 Artist’s impression of a plesiosaur, which is said to be similar to the mysterious Loch Ness monster. Shutterstock/Kostyantyn Ivanyshen

Some scientists argue that a giant aquatic reptile would have a hard time surviving in the frigid waters of the Scottish lake (around 5℃, on average). But sea turtles are large reptiles as well (some exceed 200 kg) and they can thrive in the cold waters off the coasts of Iceland and Alaska.

A study by French scientist Aurélien Bernard and colleagues, published in Science in 2010, examined the oxygen isotopes extracted from the fossil bones of plesiosaurs. The isotopes showed that these animals were likely capable of adjusting their body temperature (endothermic), and were therefore capable of surviving in relatively cold waters.

However, unless Nessie is a fish, it would need to surface regularly in order to breath and so its apparitions should be fairly frequent. But they are not.

Such discrepancy could be explained by the peculiar body shape of the creature, purportedly looking similar to a plesiosaur. The small head located at the end of a long neck would make it easy to conceal the body in the murky waters while only its nostrils break the surface for a few gulps of fresh air.

More than one Nessie needed

But there is another problem that makes the existence of such a creature extremely unlikely. Nessie cannot possibly be a single creature that has survived for thousands of years.

But, if we have several Nessies, why is it so hard to see these creatures?

The lake was sealed off from the ocean at the end of the last Ice Age, at least 10,000 years ago. Any population in question must be somewhere in the lake, if it actually exists.

What’s more, animals die. So why hasn’t a carcass of one of these animals been found?

New species of large animals do turn up unexpectedly every now and then. The Coelacanth, a fish thought to be extinct for millions of years, was caught off the coast of South Africa in 1938, and the megamouth shark is another living fossil discovered only about 40 years ago.

But these are creatures that live in the ocean, a very poorly explored part of our planet.

Considering how much attention has been devoted to exploring the waters of Loch Ness in the past few decades, with sonars, submersibles and the like, I would be very surprised if a creature the size of a plesiosaur was actually living down there.

So I ask again, why are we still searching for the Loch Ness monster?

By Alessandro Palci, Research Associate in Squamate Evolution, Flinders University. This article was originally published on The Conversation. Read the original article.