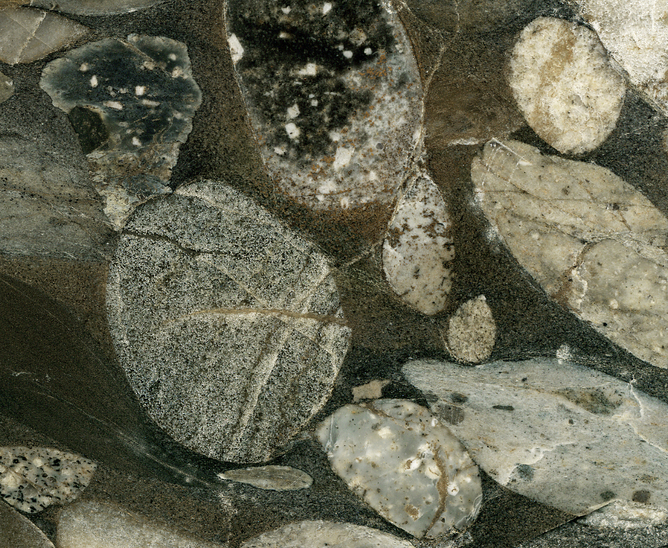 What the rocks say

I don’t have to travel very far to make this case. There’s a slab of polished rock on the wall outside my department office that refutes so-called Flood Geology: the view that a global, world-shattering flood explains geologic history after the initial creation of Earth by God. This eight-foot-long slab is a conglomerate – a rock made from water-worked fragments of older rocks.

It’s what you’d get if you buried a riverbed composed of many different types of rock deep enough below ground for temperature and pressure to forge it into a new rock. Preserved in it, you can see the original particles of sand, gravel and cobbles made of various kinds of rock. And if you look closely you can see some of the cobbles are themselves conglomerates — rocks within rocks.

In other words, this one rock shows that there is more to the geologic record than young Earth creationists describe in their scripturally-interpreted version of earth history. A single grand flood cannot explain it all. Embracing young Earth creationism means you have to abandon faith in the story told by the rocks themselves. This, of course, is no surprise to geologists who have established that the world is billions of years old, far older than the thousands of years that creationists infer from adding up the generations enumerated in the Bible. Early Christians read nature as well as the Bible

In researching my book The Rocks Don’t Lie: A Geologist Investigates Noah’s Flood, I looked into the history of thought about the biblical flood. What I found surprised me on two levels. First, most of the early workers who pioneered what we now call geology were clergy dedicated to reading God’s other book — nature. Second, in pitting science against Christianity, today’s young Earth creationists essentially ignore centuries of Christian theology.

For the first thousand years of Christianity, the church considered literal interpretations of the stories in Genesis to be overly simplistic interpretations that missed deeper meaning. Influential thinkers like Saint Augustine and Saint Thomas Aquinas held that what we could learn from studying the book of nature could not conflict with the Bible because they shared the same author.

Yes, it seems that one of the oldest traditions in Christian thought holds that when reason contradicts favored interpretations of scripture about the natural world then those interpretations should be reconsidered.

In keeping with this view, mainstream Christians reinterpreted the biblical stories of the creation and flood after geological discoveries revealed that Earth had a longer and more complicated history than would be inferred from a literal reading of Genesis. Perhaps, they concluded, the days in the week of creation corresponded to geological ages. Maybe Noah’s flood was not global but a devastating Mesopotamian flood.

For over a century, such views dominated mainstream Christian theology until the twentieth century rise of young Earth creationism. This is the version of creationism to which Ken Ham subscribes – you might remember his debate with Bill Nye from 2014.

Young Earth creationists imagine that people lived with dinosaurs and that Noah’s flood shaped the world’s topography. In fact, this brand of creationism, embodied by Ham’s Creation Museum in Kentucky, is actually one of the youngest branches of Christianity’s family tree. Those that didn’t make it onto the ark perished. Gustave Doré – The Deluge

Interestingly, one can challenge Flood Geology on biblical grounds. What did Noah do in the biblical story? He saved two of every living thing. So consider the case of fossils, which creationists attribute to the flood. What you find in the rocks is that more than 99% of all species entombed in the rock record are extinct. This simple fact offers a stark contrast to what you would expect to find based on a literal reading of the biblical story.

After looking into the long history of engagement and cross-pollination between geology and Christianity, I find it curious that the conversation constantly gravitates to arguments for and against evolution. Overlooked is how the young Earth creationist’s literal interpretation of biblical stories runs afoul of basic geological observations — like that slab of rock on the wall near my office.

A key point that gets lost in debates over the modern perception of conflict between science and religion is the degree to which this is actually a conflict within religion over how to view science.

By David R Montgomery, Professor of Earth and Space Sciences at University of Washington. This article was originally published on The Conversation. Read the original article.