Johannes Koelman
We power humanity mostly by burning fossil fuels, thereby turning chemical energy into heat that ultimately gets radiated into space. In doing so we achieve some results deemed useful: we cook food, we keep our homes and offices at comfortable temperatures, we watch television, listen to music, take hot showers, generate light during dark hours, and move from A to B and back.

Few people have a realistic view on the rate at which mankind turns useful energy into heat, and very few people have realistic expectations on the rate at which the world can transition into a renewable energy supply system. The myriad of units deployed to quantify energy use is certainly not helpful. (Anyone who knows how to convert kilocalories to exajoules to kilowatthours and to barrels-of-oil-equivalent?) Regardless the units, the huge figures that represent the energy use for the sum total of 7 billion (soon 10 billion) humans are just too big to grasp. And last but not least: sources of data often report only on components in our energy system. One source might discuss total electric power, while another focuses on total domestic energy use. Such incomplete and partially overlapping pieces of energy usage information don't make it easy to get insight in our total energy use.

More insightful, and rather revealing, are per-capita figures for TPES, the total primary energy supply. TPES represents the sum total of all fossil fuels, bio fuels, nuclear energy, and renewables used to power society. By virtue of the first law of thermodynamics it also represents the total manmade heat radiated into space. TPES in Northern Europe is such that, if fueled by oil alone, one to one-and-a-half bucket of oil per person per day would be needed. In contrast, Northern America's TPES hovers around two buckets of oil per person per day. Asian countries typically consume less than a full bucket per head, but China has already reached the three quarters mark on that bucket. 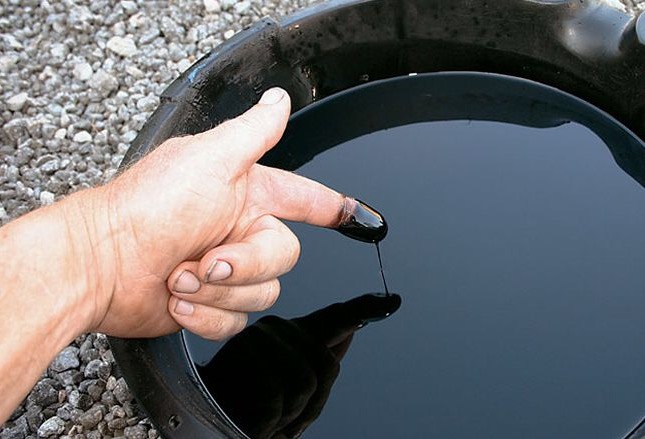 your daily bucket of oil

Let's avoid being pessimistic and assume that longer term we will reach a global per-capita TPES of no more than a bucket a day. This would mean shrinkage of per-capita consumption in almost all of the western world, and TPES per capita growth for most other countries. Now, based on the 'one bucket of oil per day per capita' TPES, we can dive into some Fermi estimation and get an appreciation of the task ahead of us when aiming for a fully renewable energy system. We will focus on the footprint required to provide mankind with a daily energy equivalent to one bucket of oil per head.

As a base case for comparison, let's first estimate the footprint required when satisfying humanities energy need with crude oil as sole primary energy source. Under this scenario, oil refineries are a key contributor to the energy system footprint. A modern large-scale oil refinery processes a few tens of thousands cubic meters of oil on a daily basis, and (including crude oil storage) typically occupies a few square kilometers. This translates into a footprint of roughly one square meter for each bucket of oil processed daily. Including power plants that converts a portion of this bucket of oil into electricity and adding pipelines and decentralized storage, a footprint of up to three square meters per capita (i.e. per daily bucket of oil) results.

This figure is to be compared with the total per-capita footprint of humanity. The current total urban area in the world is estimated to measure about 1.2 million square kilometers. That translates into an urbanized area footprint of 170 m2 per capita. We conclude that a fully hydrocarbon-based energy system would contribute about 2% to the total footprint of mankind. This constitutes an energy footprint we can handle.

From a footprint perspective, any renewable energy with a similar footprint, or even a somewhat larger (single digit) per-capita requirement, would be quite acceptable. This would start to change when energy scenarios reach double-digit m2 per capita footprint requirements. Triple digit requirements bring us in truly problematic territory. A triple-digit energy footprint might be acceptable for niche applications, but implementing a global energy system under such footprint requirement would translate into profound increases to the global human footprint. Such footprint increases, if economically and politically feasible, would take decades to accomplish.

Ok, what footprints should we expect for various renewable energy systems? 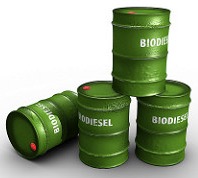 At what footprint cost?

Let's start with biofuels. Suppose we aim to render the bucket of oil per person per day sustainable using fuel derived from crops. What energy footprint (m2 per capita) would result? Let's look at the state-of-the-art, the so-called second generation biofuels. These fuels can be produced from tropical plants such as jatropha curcas. Oil represents one third of the mass of jatropha seeds. This oil can be obtained simply by crushing the seeds. Subsequent processing turns the oil into biodiesel. Per unit area, jatropha yields an order of magnitude more fuel than corn. All good news. The bad news is that, despite these promising figures, you need a lot of space to produce at a rate of a bucket of oil a day. Even when based on optimistic reports on areal energy yield, at a TPES of one bucket of oil per day per capita, you would need some 20,000 square meters filled with jatropha plants to fuel a single person's energy needs.

This represents an utterly unrealistic energy footprint, some four orders of magnitude above a hydrocarbon-based energy footprint. More importantly, this bio-energy footprint would more than hundredfold the total footprint of mankind. In fact, the 20,000 m2 per capita figure, even when assuming the world population will not exceed the 10 billion mark, leads to a total energy footprint in excess of the total land area available on our planet. These figures are sobering. Note that it doesn't matter if alternatives to jatropha plants might generate slightly more energy per unit area. The simple conclusion is that available 2nd generation biofuel technology, although it might provide a source of energy in some niche applications, falls short of fueling a significant portion of our global energy needs by a very, very wide margin. 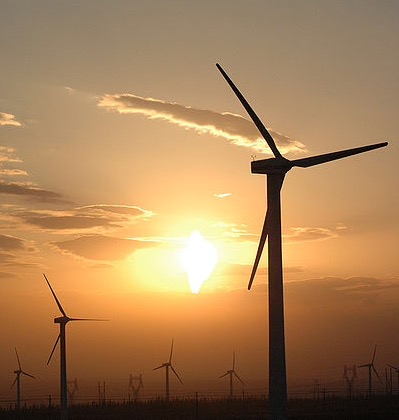 Can we do better with other forms of renewable energy? What about wind energy? When one scales up wind farms by putting together ever larger number of wind turbines, wake effects between the turbines become increasingly important. For an optimum result, wind turbines need to be spaced out, and therefore average power generation of large wind farms are limited to about 1 MegaWatt per square kilometer. This translates into a footprint of 4000 square meters to generate the amount of energy equivalent to a bucket of oil per day. This wind energy footprint is five times smaller than the corresponding bio fuels footprint, but it is a factor of thousand larger than a hydrocarbon-based footprint, and way larger than the total urban per-capita footprint of 170 m2. In fact, to satisfy mankind's energy needs with wind energy one would be required to turn the combined acreage of all territorial waters in the world into a giant global wind farm. Not a realistic proposal. 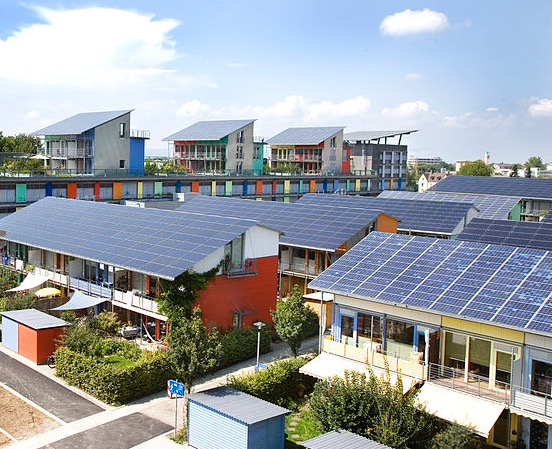 Can we do better with photovoltaic cells? The numbers do look promising. The global average solar irradiance per square meter (160 W/m2) equates to as much as 13 to 14 buckets of oil equivalent generated over a year. When multiplied with a solar cell efficiency of about 20%, it follows that a daily energy amount equivalent to one bucket of oil translates into 135 square meters of surface area to be covered by photovoltaic cells. That is a footprint roughly comparable to the per-capita urbanized area footprint of humanity. In other words: to power humanity with photovoltaics would require an area comparable in size to all of the world's land occupied by urban development to be covered by solar panels. Or using a different footprint metrics comparison: powering mankind with photovoltaics would require an area seven times the total rooftop area in the world to be covered by solar panels.

Referring to this as a daunting task, would be a bit of an understatement. And to make things worse: this whole footprint estimation exercise ignores the fact that reliable energy supply throughout the day-night cycle would require some form of diurnal storage. Storing a bucket of oil might be easy, but storing the same amount of energy in electrical form would require seven (!) Tesla Powerwall 2.0 batteries (which come with a combined price tag of US$ 40,000). And we haven't even started talking about seasonal nor about regional variations in solar irradiance. Considering that Northern Europe's average solar irradiance during winter months stands at 20 W/m2, not anywhere near the 160 W/m2 figure used above, stresses the importance to bring these variations into consideration.

What is the conclusion of all this?

Let me first state that the outcomes of the above back-of-the-envelope calculations carry significant (but unspecified) error bars. These error bars are primarily determined by the assumptions (such as future required per-capita TPES) that form the input to the above estimates. Assumptions on TPES/capita and other inputs are all explicitly listed. This renders the calculations transparent and allows you to challenge these input figures. For instance, you might argue in favor of a TPES/capita that is less than one bucket oil equivalent, particularly so for energy system relying on electrical primary energy supply.

In any case, the task ahead of us should not be underestimated. There is little doubt in my mind that, based on today's technology, switching over globally to renewable primary energy supplies constitutes a mission impossible. We are in dire need of scientific breakthroughs giving us renewable energy systems with much smaller footprints that carry the prospect of scalability to global levels. We can draw hope from recent scientific advances, particularly in areas such as solar fuels from artificial leaves. These areas of energy technology, however, are still very immature. The risk of failure is considerable, and once scientific breakthroughs are realized at lab-scale levels, it will take decades of upscaling before we can provide each human being on each day of the year with a bucket of energy. Regardless whether we are successful or not, the footprint of our civilization is bound to change dramatically.