A good friend of mine recently introduced me to an effort that is currently underway that is very ambitious, but also very promising: Project Better Place… the brainchild of Shai Agassi, former President of the Products and Technology Group at SAP AG. The vision of Project Better Place is an oil-free future where personal transportation is no longer dependent upon gasoline-burning vehicles, but by the next generation of battery powered cars. This of course is not a new idea, but what is new about Project Better Place (PBP) is the detailed plans in place to implement that vision.

Mr. Agassi has developed the design of PBP not around the vehicles involved, but around the consumers. He has tackled the obstacles that keep many people that are interested in converting from gasoline to battery-powered cars: cost, convenience, and culture.

The key things that the current generations of automobiles offer us are independence and convenience. Although gasoline prices continue to go up, we have designed our lives and lifestyles around the assumption that we can hop in our car and go whenever and wherever we need… whether it is down the street or across the country. And whenever our car needs to be refueled, it is as easy as pulling into any number of available gas stations and quickly filling up and getting back on our way. 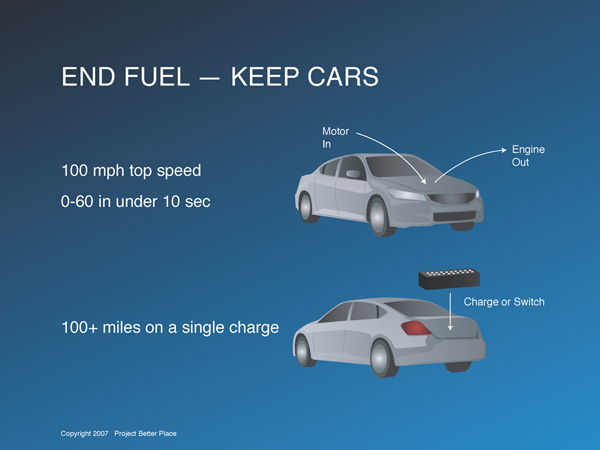 The cornerstone of the Project Better Place solution is the Electric Recharge Grid (ERG). Imagine replacing the gas stations of today with “exchange stations” where in the time it now takes to fill up your gas tank, you can instead slip in and exchange your tired battery for a freshly-charged replacement that can take you another 100 miles or so. Suddenly you can escape the boundary of local city driving imposed by the life of your battery, and instead plan a cross-country trek in your battery-powered vehicle.

Take a look at video of the concept here: 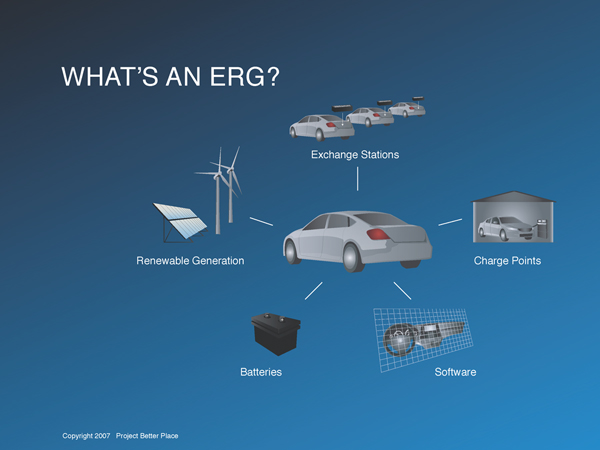 Project Better Place recently announced that the State of Israel became the first country, and Renault-Nissan the first automaker, to announce their partnerships with PBP to begin a mass deployment of electric cars. “The State of Israel has shown foresight in implementing an appropriate tax policy, and setting out a vision by which it can become the first industrialized nation to end the stranglehold of oil on its economy and environment. Renault-Nissan, likewise, has shown great vision and leadership, when agreeing to become the first major automaker to produce electric vehicles on a mass-scale to integrate with our infrastructure. We look forward to working with them to replace hundreds of thousands of polluting cars with new electric vehicles, for a cleaner and safer world.” 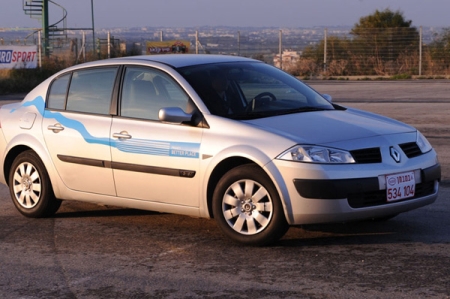 In 2008, Project Better Place will start providing an electric alternative to high-consumption professional automobiles, like taxis and delivery vehicles. Their plan is then to grow from country to country, metropolis to metropolis… with the goal of eventually making electric vehicles available throughout the entire general public.

I honestly don’t know much about the battery manufacturing process, and what the environmental impacts the mass production of this new form of fuel will be… or similarly the impact of battery disposal. Those are questions that obviously must be answered. But what I do like about this whole Project Better Place is its approach. It is taking a look at the world as it is, and developing an approach that will fit into the current culture. Ideally, the culture will shift in the coming decades, and all of us will start adjusting to a lifestyle that makes daily life less dependent upon individual vehicles powered by any means. But in the meantime, it would be unrealistic to expect that all of us could convert overnight to a world where we drove battery powered cars, given their current range limitations. So this approach meets us more than halfway. I for one will be watching the development of Project Better Place with much interest and optimism.