I’m speaking, of course, of the anti-GMO push back to my “Golden rice, golden opportunity” column.

Golden Rice is a genetically engineered crop created by borrowing the carotene-making gene from corn and placing that gene into rice, which does not produce carotene (at least not in the parts of the rice plant that we eat). Our bodies convert carotene into vitamin A and then use that vitamin A in the development of bones and eyesight.

Golden Rice will be given free of additional charges and free of restrictions to subsistence farmers, and can be replanted every year from saved harvests.

Still some people prefer to trust the ballroom-dancing teacher and Yogic flying instructor, Jeffrey Smith; Mike Adams, the self-proclaimed “Health Ranger”; Greenpeace; Vandana Shiva; the Organic Consumers Association; or Joseph Mercola over the word of the American Medical Association, the National Academy of Sciences, the American Association for the Advancement of Science, the U.S. Food and Drug Administration, the World Health Organization or… well, you get the idea.
I'm not surprised, findings published in JAMA Internal Medicine showed that 12% of Americans agreed with the statement: “The global dissemination of genetically modified foods by Monsanto, Inc. is part of a secret program, called Agenda 21, launched by the Rockefeller and Ford Foundations to shrink the world’s population.”

A whopping 37% agreed “The Food and Drug Administration is deliberately preventing the public from getting natural cures for cancer and other diseases because of pressure from drug companies,” and 12% agreed that “Public water fluoridation is really just a secret way for chemical companies to dump dangerous byproducts of phosphate mines into the environment.”

Agenda 21 not withstanding, everyone is living longer. In the U.S., where about 70 percent of the food in our supermarkets contains ingredients from genetically engineered crops, life expectancy has increased from 76 years in 1996 (when large-scale cultivation of GE crops took off) to nearly 80 years today, and global life expectancy has increased from 66.4 to 71.0 years in the same time period.

As one wag wrote, “If we're less healthy, we sure are coping with it more effectively.” And compared with Europe, which has virtually banned GE crops, there is no discernible difference in cancer rates or lifespans.

Meanwhile, there is a need for what Golden Rice can deliver: vitamin A. According to the World Health Organization an estimated 250,000 to 500,000 vitamin A-deficient children become blind every year, half of them dying within 12 months of losing their sight. “These are real deaths, real disability, real suffering, not the phantom fears… none of which have held up to objective scientific scrutiny,” risk-perception expert David Ropiek writes.

Allowing Golden Rice to be eaten by populations prone to vitamin A Deficiency means that blindness could be prevented (it cannot be cured once it has happened). Less than a cup of cooked Golden Rice provides children 6 to 8-years-old with some 60% of their daily vitamin A needs, not 7 pounds as claimed in the letter to the editor.

Greenpeace, et alia throw up various smokescreens which boil down to suggesting that it is preferable to raise the needy’s standard of living and provide them with alternative diets and/or supplements: the “Let them eat kale” defense. Those might work, but if the poor could afford a more varied and fulfilling diet, don’t you think they would do so? Fortunately, we are becoming hip to anti-biotech ploys. “[I]ncreasingly the scientific community and journalists are becoming aware of the rhetorical two-steps and destructive strategies employed by organizations that are hostile to GMOs, while pretending that they cling to science,” Dr. Mary Mangan wrote. She has a PhD in Cell, Molecular, and Developmental Biology.

Researcher at University of Florida, Dr. Kevin Folta challenges those who wish to stop Golden Rice and other bio-fortification, “If there are so many viable alternatives, what are ya'll waiting for?…It is easy to stand against a technology with a full belly and 20/20 vision…Let's give it away as intended and…Let it help people if it can.”

Agricultural economist, Alexander Stein who has written peer-reviewed papers on Golden Rice says that even under the pessimistic scenarios, “biofortification is extremely cost-effective.” Why? Golden Rice supplies vitamin A with every bowl. “[T]here is a fairly intuitive argument why biofortified crops, such as Golden Rice (or other crops that were developed using ‘conventional’ breeding), can be even more cost-effective than supplementation or fortification: Economies of scale. In the case of vitamin A supplementation all children in at-risk households need to receive two mega-doses of vitamin A per year, year after year.

In the four minutes it took you to read this, two, three or four children lost their sight due to Vitamin A Deficiency, and, in the same four minutes at least one child died. Everything else is noise. 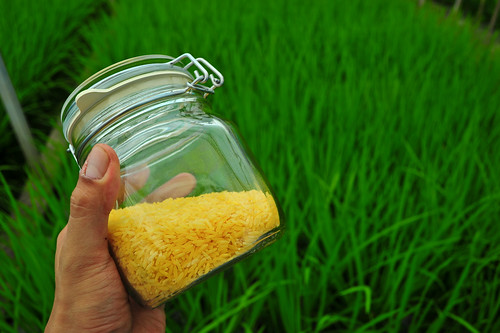 Golden Rice in a jar with the Golden Rice plants in background. Photo credit: the International Rice Research Institute (IRRI).

[5] “[Jeffrey] Smith’s background is limited to being a swing dance instructor, running for local office as a candidate with the Maharishi-linked Natural Law Party built around the powers of transcendental meditation and running marketing for a GMO testing company led by the Maharishi’s “raja for food purity, safety and health invincibility” responsible for the promotion of the Maharishi brand of “Vedic Organic” agriculture. Smith’s work is financially sponsored by a range of organic, natural product and alternative health companies who are better able to sell higher-priced products by fueling consumer fear and mistrust of well-regulated, more affordable products that may be produced using biotechnology or other conventional agriculture tools.”
http://www.24-7pressrelease.com/press-release/actual-gmo-experts-available-to-respond-to-activist-jeffrey-smiths-false-and-misleading-claims-373922.php Accessed 5 April 2014

[7] ‘So, if introduced on a large scale, golden rice can exacerbate malnutrition and ultimately undermine food security.’ This statement by (Greenpeace, 2012: 3) is in strong contradiction to the reported impacts of vitamin A deficiency and the nutritional impacts of vitamin A enriched diets. More than 125 million children under five years of age suffer from vitamin A deficiency (VAD). Dietary VAD causes 250,000–500,000 children to go blind each year.
http://journals.cambridge.org/action/displayFulltext?type=6&fid=9136417&jid=EDE&volumeId=-1&issueId=-1&aid=9136416&bodyId=&membershipNumber=&societyETOCSession=&fulltextType=RA&fileId=S1355770X1300065X

[8] Shiva tweeted after Mark Lynas’s Oxford speech that his saying that farmers should be free to use GMO crops was like giving rapists the freedom to rape.
http://www.marklynas.org/2013/04/time-to-call-out-the-anti-gmo-conspiracy-theory/

[9] Further down in its press release, the Organic Consumers Association asserts: Recent studies have linked GMOs to human health issues, including kidney and liver failure, allergies and cancer.
Kloor, Keith. GMO Opponents Use Fear and Deception to Advance Their Cause – Collide-a-Scape | DiscoverMagazine.com
http://blogs.discovermagazine.com/collideascape/2014/03/28/gmo-opponents-use-fear-deception-advance-cause/  accessed 30 March 2014

[11] Bioengineered foods have been consumed for close to 20 years, and during that time, no overt consequences on human health have been reported and/or substantiated in the peer-reviewed literature.
https://www.ama-assn.org/ama1/pub/upload/mm/443/a12-csaph2-bioengineeredfoods.pdf

[12] All evidence evaluated to date indicates that unexpected and unintended compositional changes arise with all forms of genetic modification, including genetic engineering. Whether such compositional changes result in unintended health effects is dependent upon the nature of the substances altered and the biological consequences of the compounds. To date, no adverse health effects attributed to genetic engineering have been documented in the human population.
http://www.nap.edu/openbook.php?record_id=10977&page=8

[13] There are occasional claims that feeding GM foods to animals causes aberrations ranging from digestive disorders, to sterility, tumors and premature death. Although such claims are often sensationalized and receive a great deal of media attention, none have stood up to rigorous scientific scrutiny. Indeed, a recent review of a dozen well-designed long-term animal feeding studies comparing GM and non-GM potatoes, soy, rice, corn and triticale found that the GM and their non-GM counterparts are nutritionally equivalent.
http://www.aaas.org/sites/default/files/migrate/uploads/AAAS_GM_statement.pdf

[14] Are foods from genetically engineered plants regulated by FDA? Yes. FDA regulates the safety of foods and food products from plant sources including food from genetically engineered plants. This includes animal feed, as under the Federal Food, Drug, and Cosmetic Act, food is defined in relevant part as food for man and other animals.
http://www.fda.gov/food/foodscienceresearch/biotechnology/ucm346030.htm

[15] GM foods currently available on the international market have passed risk assessments and are not likely to present risks for human health. In addition, no effects on human health have been shown as a result of the consumption of such foods by the general population in the countries where they have been approved.
http://www.who.int/foodsafety/publications/biotech/20questions/en/  accessed 2 April 2014