Wins? For whom? Like Charlie Sheen? Not for the USA, not even for General Gina McCarthy, ruler of all she surveys from her throne atop the EPA, having been so designated by the capo di tutti frutti, El Presidente Obama. Not by any objective measure, anyway. Let's review the evidence:

Here's one win: she has not (yet) been found to have a doppelganger identity and email system, like (no, not Hillary) her predecessor, Lisa Jackson, who masqueraded as "Richard Windsor" with his....oops, her own email account off the books as it were, to better enable sub rosa communications with her pals at the greeniac NGOs. This had something to do with her somewhat precipitous withdrawal from government in 2012, when Gina took over. ("Richard" was outed by a FOIA campaign orchestrated by attorneys at the Competitive Enterprise Institute).

But I digress! Gina has targeted numerous American endeavors in her campaign to save us from impending doom in the form of "carbon pollution" and resultant global boiling, about which I've written before, so let's just pass on it for now. Other than allowing me to state again that even with our best (meaning worst) efforts to kill off our energy industries and transition to cheap, reliable sustainable sources such as the sun and the wind, the temperature/climate impact would be minuscule to undetectable over at least the next thirty years (assuming there is something to detect). So that's a fool's errand, but one which will decimate our coal, oil and natural gas producers, while continuing to leave clean, safe nuclear to wither without governmental supports given to, well, you know...

Sorry again! Back on topic I swear: she wants to reduce fugitive methane emissions! Even though, unregulated, the private sector developers and drillers have reduced methane emission plenty without her help; indeed, among all the nations of the world, the United States has, alone, reduced "carbon" emissions substantially from all sources. Her plan to suppress methane emissions will, unfortunately, have the unintended (Ha!) consequence of impeding fracking and reducing output of clean, safe (yes, again) natural gas, the reason why we are in the drivers seat on energy supplies worldwide for the first time since Standard Oil 120 years ago, approximately. Ah, who cares really, when there's fossil fuel to be "kept in the ground," right?

And of course, she goes on to appear oh-so-eager to take on those who doubt that the Obama-McCarthy-NRDC agenda to obliterate fossil fuels in the name of Gore-ism will make us better off in the long run: "Many of those efforts were opposed by Republicans and industry groups, promising that the Obama administration will spend at least some of the year defending those rules in the courts. But McCarthy wrote Monday that she is “confident” the power plant rules, the key plank of Obama’s climate agenda, will stand. “We’re confident the Clean Power Plan will stand the test of time..."

Oh, so I guess there was no one among neutral or objective scientists who objected to their plans: objectors were required to show their GOP ID cards, and/or their corporate slush funds, to weigh in on this destructive program. I am neither a Republican nor an industry hiree, so there Gina. And I am not alone (please note, that "97% of everyone in the world agrees BS" has been shown to be, well, BS over and over). I, however, am at least as confident that the Clean Power Plan will be thrown out by the federal courts, one after the other, based upon it lack of concordance with the Clean Air Act and with the Xth Amendment, which proscribes federal intervention in issues that are states' dominions, as is air quality and its regulation, absent urgent exigencies. Which are not present here (I know that the Supremes were talked into swallowing the "endangerment" premise in 2007, which has largely pushed us into this unpleasant situation, but they'll retract that if they get the chance).

Wait, it gets worse: she also is quite happy with her ozone rules and of course establishing federal oversight over small waterways. The smaller the better! If she had her way, she have her enforcers visiting your home and your lawn sprinkler and your bathtub with litigation and seizure of assets. So don't do it! (Don't do what? She'll let you know). In fact, in one of her best wins was that social media campaign she implemented for her beloved WOTUS ("Waters of the US" or "Clean Waters Act" as she called it). At least until the GAO found out about it, and let her know, not so politely, that a federal agency cannot — cannot! — engender a covert astroturf campaign in support of the agency's own program! Both the fact of it, and the covert, non-transparent nature of it, were: ILLEGAL! But, again, who cares, as long as it got the job done. But wait: it did not, as the federal circuit court has put a big hold on its enforcement, like an injunction, until the full hearing — at which time it too will be thrown out! (I'll pass on the ozone rules for now, I'm short of breath).

Just kidding! The amount of O3 in the air these days is at its lowest point in...forever, but given county-by-county variations, if the NAAQS are OK'd, the costs of doing business--any business--will skyrocket, as will the cost of energy. And all for nothing: all those computer-modeled cost/benefit estimates produced by the EPA's magical machines are phony. 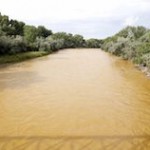 Now, for the two pieces de resistance: The Gold King Mine/Animas River escapade, and the Flint River-lead pollution disaster. Only this week, the State of New Mexico announced that it was suing the EPA for the debacle it cause at the mine, when it blundered into a real environmental debacle of its own making. The intrepid EPA investigators unleashed a torrent of pollution into the Animas River system with a voluminous watershed in the Four Corners region, sacred to various indigenous peoples. For a chill up and down your spine, see the pictures here and wonder when that will ever get clean again.

Regarding the devastation in Flint, with who-knows-how-many kids being lead-poisoned by the ill-advised switch from Lake Huron water to the Flint River, in combination with infrastructure corrosion, the New York Times (Yes! You knew it was coming!) in an editorial today blamed Gov. Rick Snyder and his Dept. of Environmental Quality for this negligence. True! But what the Times ignored is this: the EPA knew about the danger months (at least 4 months) before the state acted, yet kept quiet about it. Why? Ask Gina.

So there's the recap and the prognosis: a few more such "wins" for the EPA, and who knows what will become of us? Let us hope for a new EPA Administrator in a new administration, with a focus on improving our environment, not aggrandizing power.

Tip of the Spear
More Articles All Articles
About