Tommaso Dorigo
I was happy to meet Giorgio Bellettini at the Pisa Meeting on Advanced Detectors this week, and I thought I would write here a note about him. At 89 years of age Giorgio still has all his wits around him, and he is still as compelling and unstoppable as anybody who has met him will recall. It is a real pleasure to see that he still attends all sessions, always curious to hear the latest developments in detector design and performance. 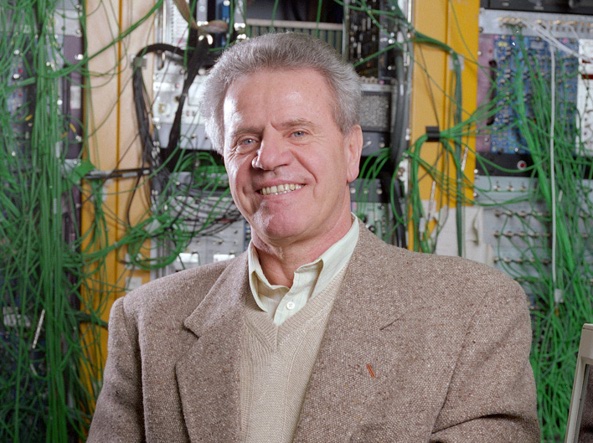 Besides having been a remarkable tennis player in his youth, Giorgio had a bright career as a particle physicist, but I cannot speak about his successes from the times before I met him in 1992 - I only recall that he worked in many experiments at CERN and Frascati (where he directed the lab) before leading the Italian team in the CDF experiment at Fermilab, in 1980. On that year, together with a few colleagues he joined the americans to construct the experiment that was meant to study the 1.6 TeV (then 1.8, then 1.96 TeV) proton-antiproton collisions that the Tevatron collider would start to produce in 1985.

Besides his crucial role in the construction of CDF, Giorgio was its spokesperson in the nineties, and in 1993 he was among the first scientists who understood that some odd high-energy events collected by the experiment were the first clear candidates of top pair production. The observation was considered controversial by the collaboration, and the american teams in the experiment dictated a cautious line that ended up delaying the discovery of the sixth and last quark, the top.

I told that story in my book "Anomaly!" and will not repeat it here, but I cannot help echoing here that the enthusiasm for physics discovery was one of the things that he influenced me with. I arrived at Fermilab in the summer of 1992 as a Summer Student, and then worked there as a undergraduate, a graduate student, a post-doc, and a researcher. All along I was a colleague of Giorgio in CDF, for the following twenty years (CDF stopped data taking in 2011, and by the following year it felt odd to be a member of both CDF and the CMS experiment at the LHC, so I dropped out of CDF).

One of the things that always impressed me about Giorgio when I interacted with him at analysis meetings or in other collaborative tasks is that he did not allow age or academic status to stand in the way of easy, amicable communication and scientific discussions. This was a wonderful feeling, and every discussion about physics with him was not conditioned by fear of saying something stupid - he would never make you feel bad if you did.

I remember once, during a "top analysis" meeting, finding myself arguing with him about some physics process, without even realizing I was an undergraduate and he was a full professor and I felt no pressure to show respect other than to the value of scientific reasoning. Or maybe Giorgio still remembers the time when he came to my office to give me a few comments on a document I had written as a summary of my Moriond QCD talk on W mass measurements. Along with many other useful corrections and comments, he pointed out a silly statement of mine and told me it needed to be changed, and when I argued that I thought my sentence was correct (insisting on my ignorance!), he very calmly explained that he was sure about it, without allowing me to feel embarrassed by my stubborn attitude.

Giorgio has been, and still is, a source of inspiration, and I consider him one of the few people who had a significant impact in my scientific career through his example. He definitely has some sort of superpowers - the kind of powers that come from decades of experience.

Today he gave a talk during a session of the conference dedicated to Aldo Menzione, another remarkable physicist from Pisa who died in 2012, and in whose memory the Pisa Meeting is awarding prizes to distinguished physicists (this year the prize went to René Brun and Pantaleo Raimondi). A little bent over by the weight of the years, Giorgio was as compelling as ever. He explained how saddened he is to have to remember a colleague who was younger than him, and then recalled a few episodes of Aldo Menzione's work. As Aldo also contributed significantly to the CDF detector, that glorious experiment was of course at the center of the attention during Giorgio's talk.

I wish Giorgio many more occasions to tell us about his experiences and perspectives on particle physics, as he did today!