Tommaso Dorigo
Do you remember the DAMA-LIBRA experiment? It is a underground detector made of sodium iodide crystals buried under the rock of the Gran Sasso mountain in central Italy, which took data for over a decade in the search of the elusive signal that slowly-moving, massive particles would produce when they bounced off atoms of the active detector material.

The idea behind the experiment is really nice, and in fact over the past thirty years it was exploited by several different instruments, which unlike DAMA-LIBRA all reported negative results (with one exception which soon turned out to be a spurious effect, CoGeNT). You assume that space in our galaxy is filled up with a slowly-moving gas of dark matter particles, too feebly interacting with each other and with regular matter to form stars or other clumps. When the Earth moves around the center of the galaxy, as it does, it encounters a stream of these particles, which traverse it without doing much else than producing the occasional soft interaction with an atomic nucleus.

If you are capable of recording these interactions, even amidst large backgrounds (we are talking about *very* rare events, hardly distinguishable from radioactive processes or other nasty mimicking processes), you can check if you see an annual modulation in their rate, for the Earth circles our Sun as it moves around the Galaxy, so you expect higher rates when we go against the stream of dark matter particles and lower ones six months afterwards, when the Earth is moving in the opposite direction relative to the Sun. DAMA-LIBRA does this with very sensitive sodium iodide detectors, which emit scintillating light when these events occur.

The original DAMA experiment took data in 1995-2003 and reported a statistically significant excess of interactions, with the very same sinusoidal shape and phase one would expect from a contribution of dark matter bounces. The experiment was then upgraded to DAMA-LIBRA and it continued to take data for another decade. Result: the signal only got stronger, indicating a clear systematic effect (a systematic effect may in general be due to the background, or be in fact the presence of a signal itself). So, is that the dark matter we have been looking for so intensively? Not so fast.


The usual motto "Extraordinary claims require extraordinary evidence" in the case of DAMA-LIBRA should be applied to killing all possible ideas of what could generate a sinusoidal variation in the event counts. This is what happens when physicists cannot dismiss a signal as a statistical fluctuation, and it is a very healthy practice. Indeed, by checking and re-checking all assumptions, repeating the analysis by independent means, performing tests of possible unaccounted-for effects, one may gain confidence that the result cannot be ascribed to mundane sources, and that the revolutionary hypothesis that what is being observe is a manifestation of new physics  (dark matter being observed conclusively, in this case) must be taken as the culprit. One is reminded of Sherlock Holmes' modus operandi: once you exclude all plausible hypotheses, what is left on the table, regardless how improbable, must be accepted as the correct explanation.

Over the past two decades, physicists have been trying to explain away the DAMA signal in all possible ways, without much success. On the other hand, experiments looking for the same particles with different technologies never saw any hint of a signal that could come from the same source of the DAMA effect. What is left is to repeat the experiment.

One idea is to reproduce the very same experimental conditions -as much as possible, which is not granted as we are talking of subtle effects at play- in the southern hemisphere, as  many seasonal effects would have a six-months phase difference, so the observation of the same periodicity with six months of phase shift would indicate that temperature or humidity variations are the source of the effect. Experiments are being built for this purpose as we speak, but it will take time to get information from them.

In the meantime, two other experiments in the northern hemisphere, based with very similar technology (and thus subjected to similar but not exactly equal systematics) have been pursuing the same signal: ANAIS, which reported results last March, and COSINE-100, which produced improved results of their data a few days ago. Let us look at what they found.

ANAIS reported a null signal, and a best-fit value for the amplitude (-0.0034+-0.0042) of a possible oscillatory signal with yearly periodicity, which is compatible with no signal (i.e. zero amplitude), and incompatible with the DAMA-LIBRA one at roughly three sigma level - which implies that the two results do not sit together well: this may mean one of the following:

1) that the DAMA-LIBRA result suffers from some unknown systematic source, producing the spurious signal they see;
2) that the ANAIS data suffers a statistical fluctuation or some other systematic effect that obliterates a genuine signal of dark matter which DAMA correctly identifies;
3) (of course this is also possible) that both experimental results are wrong, and dark matter either exists or not.

It goes without saying that when you have to compare the above three hypotheses, one of them looks more likely than the others. I let you ponder on which one that is, but in the meantime I also point out that experimental science never gives a conclusive answer to any question. So let us use some zen and just say "we'll see" how the matter evolves.

And what does COSINE-100 see? They are reporting a rather inconclusive result, in the sense that their measurement is compatible both with no dark matter and with the DAMA-LIBRA effect. You can check it out in the graph below, which shows the best-fit result of DAMA (red cross) in an amplitude (vertical axis) versus phase (horizontal axis) graph. The temperature plot shows the area favoured by COSINE-100. The result is in-between no dark matter and yes dark matter, at a level of compatibility just exceeding one sigma for both hypotheses. 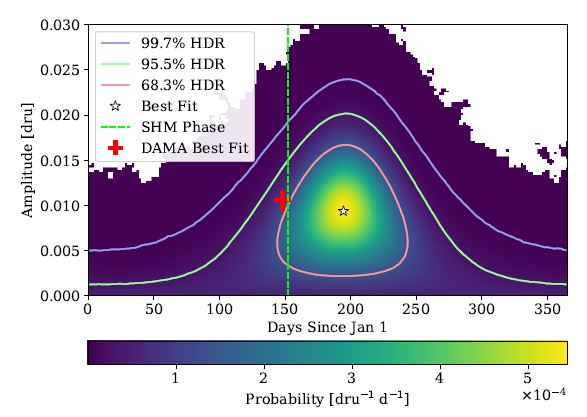 What is good, though, is that they are going to extend their dataset, and also upgrade their apparatus. So, the saga of the DAMA-LIBRA anomaly is by no means over, and it will continue to keep us intrigued for the next few years! Wait - am I sounding like I prefer to be puzzled than to discover truth? No, not at all, I will always take truth over chaos, but I much enjoy chaos as well. That's what makes a researcher happy no matter what!