Tommaso Dorigo
What is dark matter (DM)? This is one of the most pressing questions in fundamental science nowadays. We have observed that only one fifth of the matter that exists in the Universe clusters into stars and emits light - the rest appears to only interact gravitationally, producing phenomena we can study through the dynamics of galaxy rotation or by observing the deflection of light passing through it.
Since we know that visible matter is made by elementary particles - mostly protons and neutrons!, it is quite natural to make the working assumption that dark matter, too, is made of particles, although these must not interact by strong and electromagnetic interactions, like protons do - lest we would have observed them already. Yet they still have a mass, so they may produce the gravitational effects we observe on large distance scales in the Universe; and they might still be subject to weak interactions.

While the above paradigm is not universally accepted within the scientific community, it is an excellent starting point for a wide range of experimental search programs. A fruitful way to divide these is in terms of the fundamental process that would allow us to spot a signal of interaction between dark matter particles and ordinary particles we can detect on Earth.

1 - We can search for particle dark matter by observing energetic signals from the sky, in search for evidence of annihilation of dark matter particle-antiparticle pairs. The rationale behind this is that if dark matter particles gravitate together, they might collect in high-density "cusps" where they could easily annihilate. The yielded energy would then materialize into particles that would be able to travel toward us where we can detect them as cosmic radiation, in the form of e.g. photons, electrons, or protons. A number of satellites or ground-based observatories are scanning the sky for such signals, but there is so far no clear evidence of that process taking place.

2 - We can produce dark matter particles in collisions of standard matter, e.g. at the Large Hadron Collider. This is the inverse reaction to the one of (1), as instead of annihilating a DM/anti-DM particle pair and observing the ordinary matter at the end, you produce such a pair by annihilating protons. The produced dark matter particles could then be detected indirectly, by observing the characteristics of the collisions. The ATLAS and CMS experiments have been searching for DM particles in a number of different final states, but have so far been unsuccessful.

3 - We may reason that if DM particles fill the Universe with smoothly varying density, we could sit and wait as they cross us like a "wind", while our solar system moves around the Milky Way. This would be a very small-energy interaction, as we are talking of particles that, although maybe massive, travel at speeds in the 100 km/second range, not at the speed of light! Yet by constructing hyper-sensitive detectors, and placing them deep underground, where they are shielded from annoying background from cosmic radiation (of ordinary matter particles!), we could still hope that DM particles would hit nuclei in the matter of the detector, releasing a bit of energy we can detect. In this case, since Earth revolves around the Sun and around its own axis, one could be able to detect these DM interactions as an oscillatory signal with a period of 1 day, overlaid with a larger oscillation with a period of 1 year. This is because by moving against the DM wind for some of the time, and along with it for the other half of the time, the number of detectable interactions should show that kind of shape.

Now, these hyper-sensitive experiments targeting the third kind of process above utilize different techniques for the detection of the teeny-tiny bumps caused by the DM particle interactions. One of them, called DAMA/LIBRA, sits in the Gran Sasso laboratories in Italy, under 2 kilometers of rock. In that very quiet, shielded environment, the DAMA/LIBRA  detectors (scintillators) have been consistently detecting over the past decade a puzzling oscillatory signal that seems to have all the characteristics expected from DM wind interactions: a yearly modulation of the kind one would expect. Since most reasonable theoretical models for DM predict that a particle creating that kind of signal would be also observable by other detectors employing different techniques, while none have seen anything, this is a puzzle.

[Above: the sinusoidal modulation of detected interactions by DAMA/LIBRA.]

A number of possible explanations for the observed DAMA/LIBRA signal have been put forth in the past few years, but apparently none of them is convincing. Hence the obvious thing to do is to repeat the experiment somewhere else on Earth, with similar technology. This is what the ANAIS collaboration has started to do. In a paper submitted to the Arxiv today, they finally published their analysis of a first 1.5 year exposure of their sodium-iodide detector, which is located in Spain, at the Canfranc Underground Laboratory. So what do they find?

ANAIS has as of yet no sensitivity to detect a signal of the strength of the DAMA/LIBRA one, as the former has been collected over a much longer period of time. However, this first analysis of their data confirms that all is in order, and that with some more patience a confirmation or a tension with the Italian collaboration can finally be established.

The results of the analysis of the 1.5 years of data taking by ANAIS are summarized in the graph below, which shows fits to the annual modulation of the collected events. The green curve is the kind of model that the data points (black dots with uncertainty bars) would follow if the DM signal seen by DAMA/LIBRA were real. So far, ANAIS fits a signal consistent with zero, but the large uncertainty is certainly compatible with both the DAMA/LIBRA and the null hypotheses. Inconclusive for now, that is. 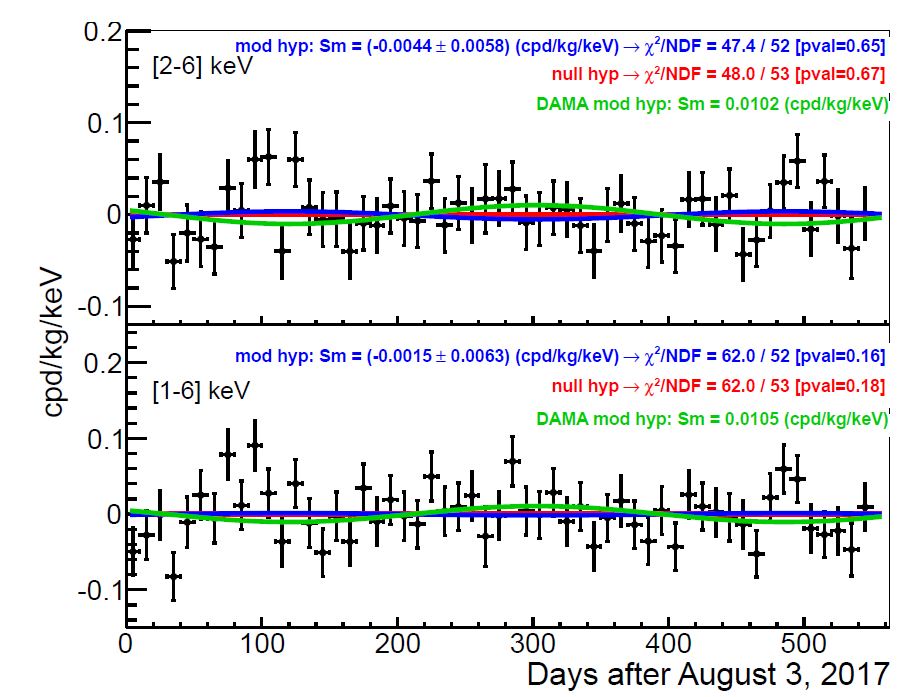 [Above: the two parts of the graph refer to two different energy intervals for the studied interactions by ANAIS; the overall distribution of the data after selection cuts and efficiency corrections has been subtracted, to leave out only the possible time modulation of the residuals. The red and blue curves overlaid to the data show fits assuming no modulation (red) or the best-fit modulation strength (blue). The best fit signal strength is also reported on top of each graph.]


Yet in five years, a DM signal like the one seen in DAMA/LIBRA can however emerge in ANAIS with a three-sigma significance. What would happen in that case is hard to say, as sceptics would still be able to argue that there is the same kind of systematic effect in both measurements; yet there is no doubt that in that case the DAMA/LIBRA result would become a more prominent candidate for solving the DM puzzle for good. On the other hand, if in 5 years ANAIS sees nothing, the temptation to archive the whole thing as an ill-understood anomaly would become a hard one to resist.

It should be mentioned at this point that there are other experiments looking for the same DM signature. I have no space to cover them here, but you can look them up if you are interested: one is the COSINE-100 experiment; a second one is called SABRE; and a third one is COSINUS. Hopefully in the time scale of the next decade they will collectively clarify this issue once and for all!