Optimizing The Geometry Of A Muon-Electron Scattering Experiment
By Tommaso Dorigo | February 24th 2020 06:23 AM | Print | E-mail

Tommaso Dorigo
Tomorrow morning the Cornell arXiv will publish the preprint of a long scientific article, the result of 4.5 months of painstaking work by yours truly. So I thought I would give you a preview of its contents. Of course, it will take more than a single post to do a good job - I guess I can describe the generalities here, and leave it to another time the plunging into technical details that may only be interesting to insiders.

The reaction proceeds, in the overwhelming majority of cases, by the electromagnetic interaction, mediated by the exchange of a single photon (a space-like one, if that means anything to you). But in the quantum world, everything overlaps with everything else: so there is a small but non-negligible contribution from processes where the photon temporarily "splits" into quarks. By measuring precisely the muon-electron scattering rate, the MUonE proponents hope to pinpoint the size of that small contribution (called "hadronic contribution" in the following), which has a large relevance in a totally different measurement, that of the anomalous magnetic moment of the muon.

The elastic scattering process per se is a very simple thing: you direct a beam of muons against a fixed target, where the oblivious electrons mind their own business, lazily spinning around their nuclei. Occasionally, a muon kicks an electron off by throwing a photon at it: both electron and muon then emerge from the target with some angular divergence from the initial muon direction. You measure the trajectories of incoming muon and outgoing muon and electron, and count how many you see as a function of those angles. And you are done. Easy to the point of being boring? Not really.

As Richard Feynman used to say, anything is interesting if you study deeply enough. The precision required by MUonE to extract the hadronic contribution to the scattering is of a part in a hundred thousand. This can only be achieved with a detector which is both very precise and robust to backgrounds and systematic uncertainties of all kinds.

The experiment is planned to be built at CERN, where a beam of 150 GeV muons with suitable intensity is available. Since you need to track particles without affecting their direction (so that you can precisely estimate angles), the setup foresees the use of precise silicon microstrip detectors, which collect in densely arranged strip electrodes the ionization charge left by the electrically charged particles as they traverse 320-micron-thick silicon sensors. The strips are separated by 90 microns; by alternating layers where strips are laid in one direction and in the orthogonal one, one gets to 3D-track the ionizing particles with position uncertainties in the 10-micron range.

The layout proposed for the experiment foresees 40 identical measuring stations, placed in series one donwstream the other. The idea is that each station can both track muons before they interact in the following ones, and track muons and electron emerging from the target after an interaction has taken place. The setup of a 1-meter-long (okay, 40 inches, you spoiled non-metric brontosauruses) station is shown below. Muons enter from the right, and they get tracked in three silicon modules.

My original interest in the experiment is due to my (now terminated) involvement in the "Commissione 1" of INFN, where new proposals for scientific endeavours in accelerator-based physics are discussed. When I got to know about the experiment I studied the matter in some detail, and I came to the conclusion that a different arrangement of the target and detection elements could provide benefits to the measurement. However, there is nothing easy about figuring out on the back of an envelope what resolution one may achieve in the tracking of subnuclear particles by the use of this or that experimental choice, so I figured I needed to simulate the physics of the interaction and the reconstruction of the events kinematics to prove my points.

I therefore started to code a simulation program which could produce simulated elastic scatterings, as well as simulated charge deposits in the active elements of the detector, when the latter was allowed to change configuration with optional parameters chosen by the user (me). The program had to take into account the physics of the scattering, the physics of the modifications of trajectory and energy that particles undergo in traversing matter, the physics of charge deposition and collection in the sensitive elements. And it had to then use the collectable information in a reconstruction of the meaningful measurable quantities - the particle angles, from which one obtains an estimate of the energy transfer of the scattering reaction. Only then would I be able to compare the merits of different detector geometries.

The above looks like a tall order. And it is. If you want to be accurate, there are a large number of small details that require a farecul modeling (pun intended). The program grew to something which is over 7700 lines long now. I would bet a testicle that there still are bugs in it, even after weeks spent polishing it off. But eventually, I am confident that any remaining issue is not affecting the results appreciably. The simulation code provides the answers I wanted, plus more. In fact, while performing the exercise of modeling the detector and the scattering I realized that there were a number of smart little tricks which could improve the capabilities of the experiment.

Thou shalt stagger thy strips

Below I show one graph taken from the article, which proves how the relative resolution in the energy transfer (we call it "q-squared"), as well as in the individual angles of incoming and outgoing particles can improve by over 40 percent if a tiny modification is operated on the assembly of the double-sided silicon sensors that MUonE plans to use. 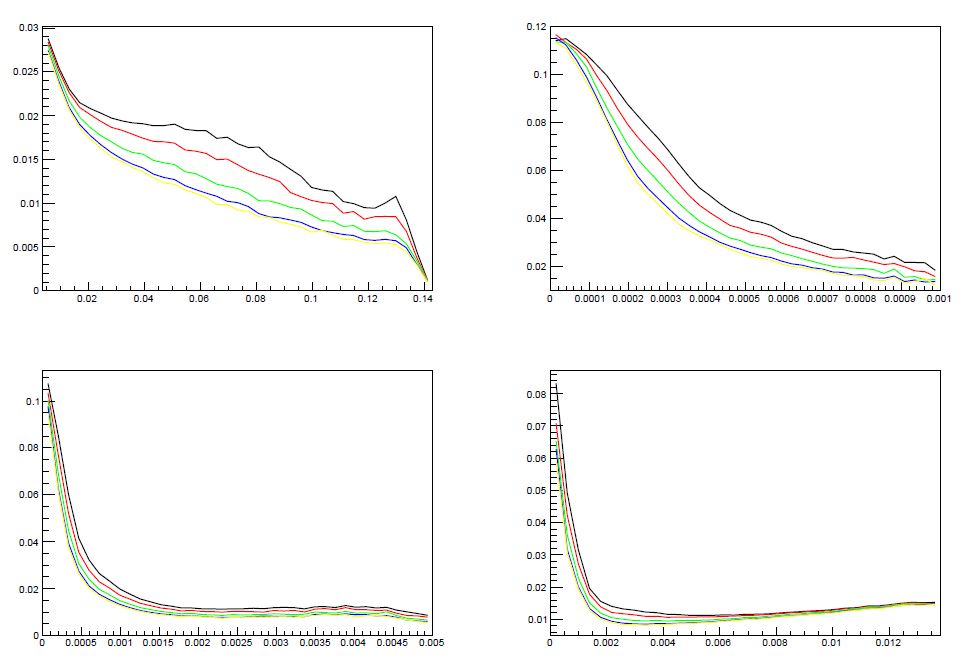 I have shown this result here because it is one of the most striking, but also one of the easiest to understand intuitively. Each of the silicon modules measures particles twice as there are two back-to-back measuring devices separated by 1.8mm from one another. Since particles incide with almost exactly orthogonal trajectories, the two measurements determine the same cooridinate (vertical in the graph below). The discreteness of the measurement device (strips spaced by 90 microns) causes the two measurements to act as one. If the strips are staggered by half strip pitch, instead, the resolution improves by a factor 2!

[For the unconvinced folks out there: the probability density function of the measurement is a box distribution, not a Gaussian, so your guess that the improvement is by a factor sqrt(2) is wrong!]

At the end of my 54-page article I was able to put together a list of recommendations which I hope may help the design of a more performant detector. I paste them below for the really nosy among you. If you are interested in the matter, I suggest you to also download a copy of the article here, one day before it appears on the arXiv!