Tommaso Dorigo
This is the second part of a section taken from Chapter 3 of the book "Anomaly! Collider Physics and the Quest for New Phenomena at Fermilab". The chapter recounts the pioneering measurement of the Z mass by the CDF detector, and the competition with SLAC during the summer of 1989. The title of the post is the same as the one of chapter 3, and it refers to the way some SLAC physicists called their Fermilab colleagues, whose hadron collider was to their eyes obviously inferior to the electron-positron linear collider. For part 1, see here.

A few days later, the issue of Stanford's bad-mouthing of Fermilab became the topic of a lunch time discussion in the cafeteria of the Hirise. Tollestrup was sitting in the company of a dozen colleagues around the two big round tables they had set side by side. Steve Errede, an assistant professor from
the University of Illinois who convened the Electroweak working group, was sitting across from Tollestrup. (In CDF, the progress of physics analyses was discussed within several independent working groups, led by pairs of conveners that remained in charge for two years; the Electroweak group managed analyses that targeted measurements of standard model properties in processes with electroweak bosons.) Everybody agreed that the SLAC scientists had gone too far with their denigrating statements. One of them was reported publically referring to as "slimeballs" the CDF experimenters, making fun of their efforts to extract meaningful physics results from a collider unworthy of its fame.

The CDF scientists knew that from an objective standpoint the alleged imprecision of hadron collider experiments was baloney. For instance, they had already measured quite accurately the mass of the J/psi meson using its decays into muon pairs. This showed that the tracking was capable of determining particle momenta excellently despite the "messy" hadronic environment and the large number of particles that proton-antiproton collisions generated in each interaction. And if SLAC scientists considered "precision physics" solely the measurement of the mass and properties of
electroweak bosons, then again, that kind of precision physics was certainly also in CDF's cards. Using the couple of hundred Z decay candidates collected in the 1988.1989 run, a value much more precise than the one until then known appeared achievable, especially once Wicklund had showed how the electron energy could be calibrated to sub-percent accuracy. 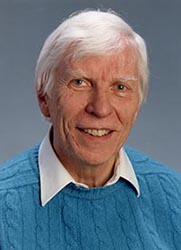 One of the graduate students at the table said "We should just prove that the SLAC guys are wrong!", but that looked like wishful thinking. The members of CDF appeared resigned to the fact that in a very short time Mark II, the detector of SLC, would sweep the table with a Z mass measurement that from then on only the LEP collider at CERN would be capable of challenging. The first Z boson had been detected by Mark II on April 11, so a first measurement of the Z mass was considered imminent. At some point Tollestrup, who was sitting on the other side of the big table, looked in Errede's direction with his gorgeous, penetrating blue eyes, and said: 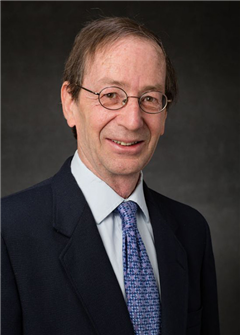 Errede (see right) did not answer. He was taken by surprise; "Is he talking to me?" he thought. He had a great respect for Tollestrup as a scientist. In particular, he was deeply impressed by the transformation that Tollestrup had wrought on the construction of the superconducting magnets for the Tevatron after assuming the leadership of the project. Errede was also a bit intimidated by the fixed stare of those deep blue eyes and that snow-white thatch: "He was one of those guys, you wouldn't like to be in their gun sight," he recalls. And the Illinois professor could not be sure that Tollestrup was really singling him out from among all the colleagues sitting around the table; others could have been the target of the enquiry.

A couple of seconds went by; then Tollestrup repeated his question insistently:

Steve finally emerged from his momentary hypnotic state. Alvin was really asking him to direct the Electroweak group's forces toward a measurement of the Z mass. It had to be competitive with the one which Mark II was going to soon produce, and crucially it had to be published first. It was a fantastically tough challenge! But Steve knew he could count on quite a few strongly motivated colleagues to take it on. He quickly decided that there was only one possible answer, and he gave it.

Of course, being a fundamental parameter of the standard model, the Z boson mass did not need spite as a motivation to be measured. It was clearly in the interest of CDF to invest significant efforts to obtain a precise result. To Alvin and many others, the fact that Mark II was close to publishing
their first Z mass measurement, whose foreseen precision CDF could not hope to attain, made the matter an urgent one. CDF had to produce a precise measurement before Mark II could publish its first result. Only thus would the work receive precious citations in all future physics papers discussing the Z boson. Otherwise the CDF members would be beaten by a nose, turning the small but precious bounty of Z bosons captured in Run 0 into a largely irrelevant dataset.

That same afternoon Steve assembled a group of willing and able collaborators, and identified and distributed the different required tasks to the crew. Then special weekly meetings were scheduled to closely monitor the progress of the activities. The ongoing activities were better not discussed at their otherwise natural place, the Electroweak group meeting: it was considered unsound to publicize too much the Z mass measurement effort within the collaboration. In particular, a few of the collaborators from the Berkeley group also participated in the Mark II experiment. They needed to be kept in the dark about the ongoing effort, as the possibility of leaks to the competitors had to be minimized.

The weekly cadence was soon sped up to two meetings per week, and by the beginning of July the participants ended up meeting multiple times every day, as it was realized that the analysis effort would otherwise not converge to a final result in time. The meetings were not a waste of time:
there were many different analysis activities progressing steadily in parallel, and it was crucial that they could provide feedback to one another. First of all, there were two separate measurements: one based on the sample of 132 Z->mumu decay candidates isolated in data collected by a trigger selecting events with high-momentum muons; and a second one using the 73 Z->ee candidates coming from data triggered by electrons of high energy.

Those two measurements used the same calibration procedures for particle momenta and modeling of the physics of Z production and decay, and specific inputs related to the peculiarities of the measurement of electrons and muons. A multitude of subtle physics effects playing a role in the measurement required a detailed study and the full dedication of one or two scientists each. During those weeks, Steve felt like he was providing more psychological support than physics advice. He kept running up and down the trailer corridors from one office to the other to pass on information and provide specific input to his crew members. And he often found himself encouraging them and alleviating their discomfort for the previous commitments that they had been forced to set aside.

(to be continued in part 3)