Tommaso Dorigo
Old timers of this blog will recall that I am an avid stone collector. In fact, of all experimental sciences I am fond of (Physics, Astronomy, Geology above others) Geology is the one that fascinated me first, as a six or seven year old child. We are talking about almost fifty years ago, when newspaper stands in Italy used to sell small packets containing pictures of soccer players (they were not even adhesive back then: you had to use your own glue to attach them in the proper place within collection albums which were sold separately) . Kids collected those "figurine", and exchanged them with their peer after school hours (or even during school hours). Other collections offered were ones of minerals, fossils, stickers, etcetera.

Of course, regular kids collected soccer player pics, while weird ones like me rather preferred small pieces of mineral crystals and stones. These were usually of the dimension of a half inch across; each came within a small plastic box and packaged within a paper package. I think the cost of a packet was of the order of half an euro, in today's currency. Part of the excitement in the business was of course to see what you had gotten, as you opened the envelope. Could it be an amethyst? Or a topaz? Maybe a diamond?

One of the first specimens I remember getting was an almost perfect dodecahedron, of greyish to greenish colour. According to the small label, it was a grossular garnet. I still own it - see the pic below. About 2x2x2 cm in size, it is rather unconspicuous but still quite suggestive of the class of minerals it belongs to, garnets. 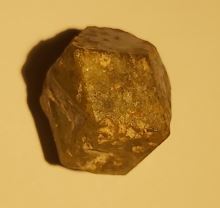 Garnets come in a large variety of species, and have wonderful colours at times, even colour-changing or multicoloured. The clearest, highest quality ones are cut as precious stones, and some (especially the intense green variety called Tsavorite) may cost very large sums of money, too. They form very well defined crystals in the cubic system, but these crystals are not actually cubic - they most of the times form dodecahedra or hexochtaedra.

Over time, my collection of minerals has grown to about 500 specimens, and over 40 of them are garnets - either loose or embedded in rock with other minerals. I have always been fascinated by their often perfect shapes and incredible variety of colours. But the single physical quality that makes garnet really special is their vitreous luster, which makes them really beautiful if they are transparent. But unfortunately, most garnets are not transparent! While they can grow to large sizes, they typically are opaque due to impurities.

Today I was walking by the stands of an oriental fair, and my attention was caught by an african-looking seller who had some mineral specimens on sale, laid on a wide tray. I immediately recognized that all the stones in the tray came from Mali, as there were several pieces of Prehnite and Epidot, which come in large quantity from that country, with very characteristic shapes. And the same mines that produce those two minerals also produce garnets of nice quality, so I stopped to watch more closely.

Indeed, there was one garnet in the lot. A single one, and yet it was a quite remarkable one, with a nice two-colour combination. The stone was 2x2x2 inches, with a roughly dodecahedral shape; the least regular side had a nice "window" with a complex crystallization surface, which allowed to see the clear green interior of the stone. And what a luster it showed! The vitreous look of the surface, with its banding oriented only apparently at random, is a pleasure to look. I could not resist purchasing it, although it was (correctly) the most pricey item of the whole lot. You can see the specimen in the picture below. 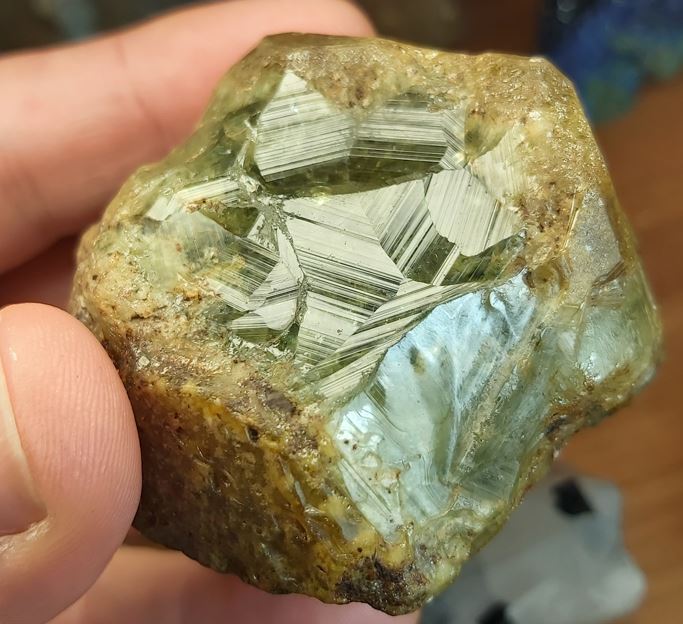 Back home, as I proudly placed the stone among other high-quality pieces in the top shelf of my collection, I could not help asking myself why I collect these stones after all. I mean - I know why I do, but it is something that I need to explain. It is not a wish of possession per se, although of course that is part of the mix.

Mostly, I feel the very same excitement I felt when as a six-years-old kid I unwrapped those small parcels, and the same awe in observing the characteristics of minerals, in contemplating them, touching them, and learning more about the physical properties, the distribution, the value of these stones. There is a lot to learn!

And yet, I can't help admitting that collecting specimens (especially if you do not actually go out and dig them out of the ground by yourself, which is however a very complicated activity) is a rather idle, pointless practice....