Tommaso Dorigo
Elementary particles are mysterious and unfathomable, and it takes giant accelerators and incredibly complex devices to study them. In the last 100 years we have made great strides in the investigations of the properties of quarks, leptons, and vector bosons, but I would lie if I said we know half of what we would like to. In science, the opening of a door reveals others, closed by more complicated locks - and no clearer example of this is the investigation of subatomic matter.
I can make an example of why our knowledge is still really limited. We know that protons and neutrons are made of quarks and gluons. But we have no clue of the dynamics of the interior of protons and neutrons. We know the general rules, but we cannot use them to calculate the probability that a quark moves with a given energy inside the proton.

Another example could be the fact that we can measure the mass of particles - an attribute best understood as the reluctance of the particles to change their state of motion, under the action of a force; but we have no idea of what mass really is, nor why it is so different in different quarks: e.g., the top quark is a hundred thousand times heavier than the up quark. The list could go on. its very existence is a good way to explain why as physicists we are investing our lives in trying to decrypt at least some of these deep mysteries.

So, elementary particles are mysterious. But there are three of them which are doubly so. These are the neutrinos, the electrically neutral partners of charged leptons. Neutrinos are true ghosts: they are completely invisible, and they interact so little with ordinary matter that they could travel through a light-year thick wall without being scattered away. They are irrelevant to strong interactions, which keep nuclei together; and yet they are extremely important in weak interaction processes that allow stars to burn.

While neutrinos do not constitute ordinary matter, they are produced by many sources. Stars, of course, emit them in huge numbers; and when stars explode as supernovas, they emit such huge waves of neutrinos that we can detect them from hundreds of light years of distance. But neutrinos are also coming directly from the cosmos, produced by other mechanisms we know very little about. And they also come from the interior of the Earth, thanks to the decay of heavy elements. Finally, neutrinos are produced in large amounts in nuclear reactors, as well as in nuclear explosions.

Nowadays we can study neutrinos with giant underground detectors. In these detectors the rare interaction of a neutrino with large amounts of solid or liquid water or other transparent media allows us to picture the reaction through the emitted light that the secondary products of the interaction yield as they get kicked about. There are hundreds of such detectors nowadays, and they can be rightly called "neutrino telescopes" despite the fact that they look nowhere like an ordinary telescope. No tube, no eyepiece, no mirror or lenses - and yet they can indeed produce images of the collisions, and even images of the sources of the neutrino fluxes, as in the case of our Sun. 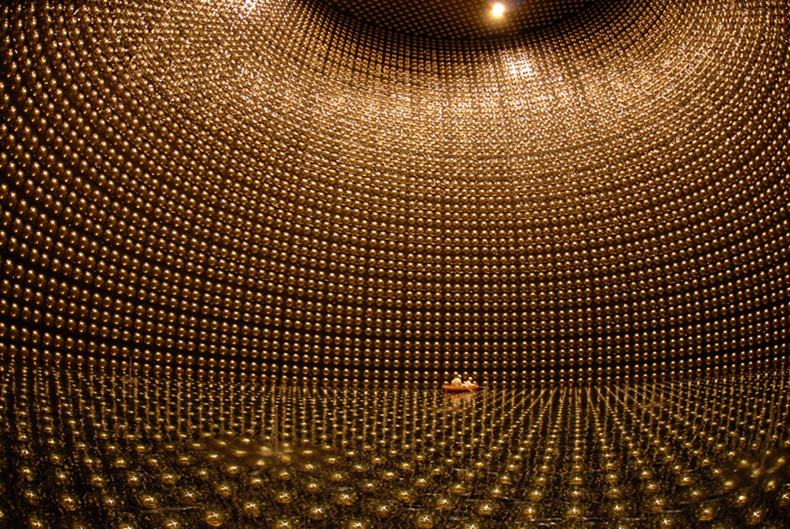 (Above, the interior of the SuperKamiokande detector, a huge water vessel observed by photomultiplier tubes located in the Kamioka mine in Japan)

Many are the mysteries surrounding neutrinos. Are there three, or more of them ? What is their mass ? How do they mix with one another ? Answering some of these questions will certainly bring us a step further in our knowledge path. Perhaps the most nagging of the above questions is the fact that we have as of yet not been able to measure their mass. We know it is very, very tiny, and yet we also know it is non-zero. Measuring the mass of the three neutrino species would allow us to understand a lot about them as well as about a number of other surrounding questions.

As a particle physicist who has spent his life doing searches and measurements with particle colliders, neutrinos are not at the center of my studies. Indeed, neutrino physics has drifted so much away from particle physics proper that it is rightfully a separate branch. Neutrino physicists use tools that are very different from those used by collider physicists; for example, they know much more nuclear physics than we do, because to detect neutrinos you need to study the detailed properties of nuclei, e.g. ones that may contaminate their detection tools.

Because of that, I am very happy to be spending this week at a biennial conference that deals solely with neutrinos and tightly related topics: the "Neutrino Telescopes" conference in Venice, that takes place at Palazzo Franchetti until Friday. The agenda of the conference shows that there is a full program of talks describing the most recent advances of a number of neutrino experiments around the world. I will be blogging some of those results from the conference blog site, and pasting in this blog some summary at a more digestible level.

----
Tommaso Dorigo is an experimental particle physicist, who works for the INFN at the University of Padova, and collaborates with the CMS experiment at the CERN LHC. He coordinates the European network AMVA4NewPhysics as well as research in accelerator-based physics for INFN-Padova, and is an editor of the journal Reviews in Physics. In 2016 Dorigo published the book "Anomaly! Collider physics and the quest for new phenomena at Fermilab". You can purchase a copy of the book here.