Tommaso Dorigo
"Anti-scientific thinking" is a bad disease of our time, and one which may affect a wide range of human beings, from illiterate fanatics such as anti-vaxxers and religious fundamentalists on one side, to highly-educated and brilliant individuals on the other side. It is a sad realization to see how diversified and strong has become this general attitude of denying the usefulness of scientific progress and research, especially in a world where science is behind every good thing you use in your daily life, from the internet to your cell-phone, or from anti-cavity toothpaste to hadron therapy against tumours.

Beware, I am all aware that science is also behind quite horrible things, like the atomic bomb, nerve gas, or the rise of idiotic clowns as presidents of whole countries. With power comes responsibility, they say, and indeed, humankind is raising the stakes in this game, with its advancements in science and technology.

As for what it means to be anti-science: today, half-jokingly, I tickled the dragon's tail in my Facebook page by posting the following text:

Some perspective on the critics of big science:

"Despite this arsenal of brains and technological brawn [...], the participants have failed to find their quarry, a disagreeable reminder that as science gets harder, even Herculean efforts do not guarantee success.” […] “Some regard such failures as proof that high-energy physics, one of the biggest avenues of big science, is fast approaching a dead end.” […] “Failed experiments of such a grandiose scale offer easy marks to critics who contend that ‘big science’ produces too meager a crop of knowledge for what it costs.” […] “all these projects soak up more human talent and more public money than society should permit, skeptics argue.”
-----The New York Times.

Why did I do that, you might ask -indeed, I have loads of work on my table today, and I do not wish to engage in blog wars. The fact is, I had to send a pdf copy of my book "Anomaly!" to a colleague (BTW if you want one, just ask), and when I checked the file I opened it by chance precisely on the quote above, which is used in the book in a discussion of how the media deal with progress in particle physics.

The piece from which the quote is taken was published on January 5th 1993 on the New York Times, with the title "315 Physicists Report Failure in Search for Supersymmetry", and it was part of the campaign against the Superconducting Super-Collider, which indeed was canceled later that year by a unilateral decision of the US Congress. With that decision, we were set back by at least a decade in fundamental science with particle accelerators, and possibly, we indeed were deprived of new discoveries (because of its smaller diameter the Large Hadron Collider, which started operations 16 years later, has reached only a third of the design energy of the SSC, and consequently might never have access to the physical phenomena that the SSC would have probed).

So, I did tickle the dragon's (Sabine's) tail (we are friends on Facebook and she was tagged in the text above), and the dragon replied with the following:

yes, good points. if people had listened to him back then the world would be in a better position today.

I just don't understand this. Why would the world be better off by not having discovered the top quark and the Higgs boson, and not having constructed the LHC?????????? I could not understand it, so I answered her by asking the question:

Really ? With no top quark and no Higgs boson ?

And her reply came, and it chilled the blood in my veins:

The Tevatron was built long before 93, as you certainly know. And, face it, the world could well live without the Higgs boson.

OMG. The first part of this sentence is so impulse-driven: shallow! In fact, with a minute of thought, one could realize that constructing a collider (the Tevatron) does not grant a discovery (of the top quark) by any reasonable means! You need dedication AND money to run the machine for long enough! If Fermilab had seen its budget cut at the end of 1993 as was the one of the SSC construction, the 1994-1995 data taking run would not have taken place, and the top quark would not have been discovered then.

But the second part is what chilled my blood. The world can live without the Higgs boson? SRSLY? This is precisely the anti-scientific attitude we have seen with campaigns against the construction of new accelerators. Now, I can sort of understand arguments against that use of public money: if one were certain that a new accelerator would not discover new things (which has been her workhorse in the past, but nobody can be certain of such a thing), then one might argue it would not be useful (it would still be, but that's a topic for another blog post). But if one knows that something _extremely_ important would be found (the Higgs boson, which, do not forget, earned a Nobel prize in 2013), then deliberately saying one would have preferred it if the Higgs had not been found it, is unprecedented in my opinion. It is 100% anti-science to me.

Because, please read back the two replies: the world would be better off. Better how? More money for what exactly? Or more attention to what? In exchange for not knowing the answer to an incredibly fundamental question, one which led theorists to hypothesize the existence of a new force of nature 50 years before its discovery, and 10 years before the discovery of quarks?? And mind you, not knowing for good, not "not knowing until the next accelerator", because the arguments are that these things are useless, as they did not discover supersymmetry: Malcolm Browne did it in 1993, and this has been a recurrent theme since then. So, no LHC, no Higgs, and we would never get to know. Is this your idea of human progress?

I think the above shows the hypocrisy of all those who argue we should not spend more funds into building new colliders. And I rest my case. 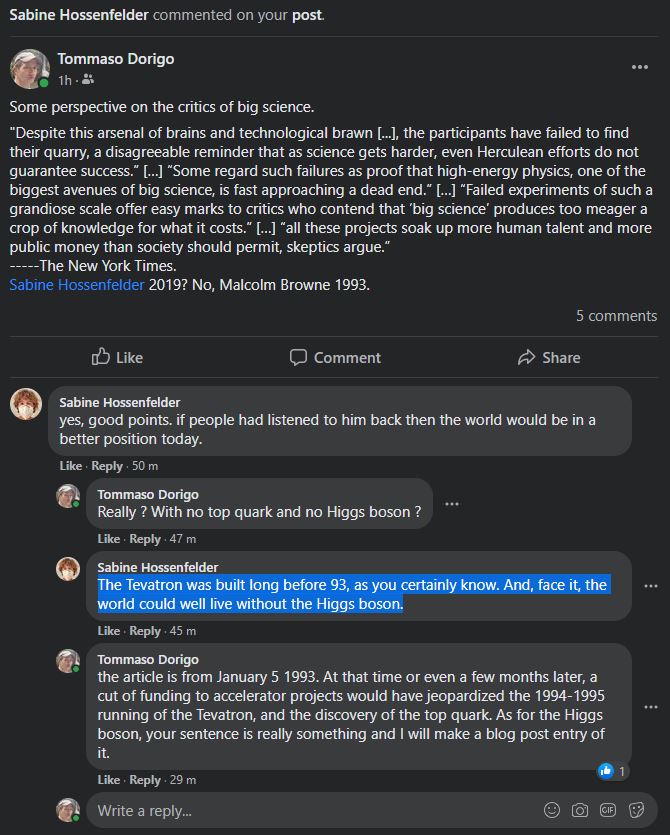