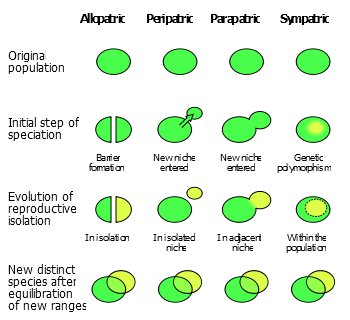 Allopatric speciation is fairly easy to understand - when a population is split into two by the formation of some sort of a barrier (like the uplift of a mountain range, for example) and the two new populations are no longer able to exchange genes, they are free to "wander" in different directions.  The end result may be two lineages that are so different that they can reasonably be classified as different species.  In the case of Bursera in Mexico, this is likely to be the main driver of diversification.  On the other hand, sympatric speciation is more difficult to explain, since the two populations separate while still occupying the same area.  Not hugely difficult, but a little more difficult.

How speciation occurs is a far easier question than why* speciation occurs.  What triggers speciation?  Or, perhaps, why does it happen in some instances, but not in others.  In southern Mexico, it appears that the uplift of mountains isolated populations of certain Bursera species, allowing them to evolve into distinct species.  On the other hand, Ceiba pentandra (the silk cotton or kapok tree) and Symphonia globulifera have colonised the Americas from Africa.  Despite the obvious isolation between African and tropical American populations, neither lineage has split into daughter species.  Is this a property of the taxon (are Bursera lineages more prone to spawn species than Symphonia lineages?), of the area (is there something about southwestern Mexico that leads to the formation of species?) or is it something else?

*I was once told than "why" isn't an appropriate scientific question, since it implies that there is some sort of deeper "meaning" to the question.  For the sake of clarification, let me say that by "why" I mean "what triggers speciation", a mechanistic question, rather than "why do we have species", a philosophical question.