Becky Jungbauer
I laughed when I saw an upcoming conference on aging was to be held in Miami - really, can you think of a better place?

Anyway, I was following a related link and discovered the story of wrinkled bats - not the leathery-skinned, bingo-playing ones living in Florida, but actual bats with the cutest little smooshed faces. I think these deserve a spot on Josh's second cutest babies ever series. 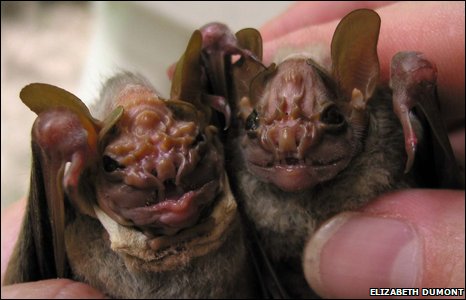 A BBC article says researchers "report in the Journal of Zoology that this bizarre-looking bat has evolved a powerful bite that may give it an advantage over other bats."

The bite allows the pug version of bats to eat "a broader range of foods than other small fruit-eaters with weaker bites."

This cute little critter is only about 17 grams, but produces bite forces up to 20% higher than other bats of similar size.

"We found that relative to head size, Centurio generates the strongest bites known for any fruit-eating phyllostomid (or leaf-nosed) bat," explained lead author Elizabeth Dumont from the University of Massachusetts Amherst in the US.

They proposed that a shortage of softer fruits during "lean times" may have provided a selective pressure, driving the evolution of its oddly-shaped skull.

The wrinkled bats come from the same family as vampire bats, but it's actually a very gentle creature.