In the first article on this topic, I suggested that we can measure what people prefer and value, but we don’t know the “why” behind those preferences and values.

An evolutionary psychologist from the London School of Economics, Satoshi Kanazawa, wrote a paper on the origin of individual values and preferences that suggests values are tied to IQ, and you can theoretically predict the values of a nation based on its average intelligence.

Evolutionary psychology may be able to help answer that “why,” as it can in theory explain both universal and individual preferences – the study of universal human nature, and the interaction with the environment.

I originally thought this would be a two part series but am extending it to three to fit more in! The first part was a brief background; this article will address the difficulty in defining and measuring intelligence. The next article will discuss the intersection of intelligence and the Savanna Principle, and its ties to evolution and application to the “why” question – including responses from the author himself, who was kind enough to reply to an email I sent.

That, dear Watson, is not exactly elementary. Li et al., in the May 2009 issue of PLoS Computational Biology, note that “no universally accepted definition of animal intelligence exists, nor has any procedure for measuring it come to dominate the field.” They write that a view emergent from comparative and evolutionary psychologists and cognitive ecologists is that “animal intelligence can be defined as the degree of mental or behavioral flexibility resulting in novel solutions.”

Roth and Dicke, in their 2005 article on evolution of the brain and intelligence, echo that thought and add that intelligence may be defined and measured by the speed and success of how animals, including humans, solve problems to survive in their natural and social environments, resulting in the appearance of novel solutions that are not part of the animal’s normal repertoire.

Kanazawa defines general intelligence as “the ability to reason deductively or inductively, think abstractly, use analogies, synthesize information and apply it to new domains.”

Humans are generally considered to be the most intelligent animals on the planet, but why? And is there anything unique about us that makes us so intelligent?

Traditionally, they write, intelligence has been correlated with absolute size of the brain, relative brain size (to body size), encephalization and size of the pre-frontal cortex.

Humans don’t have the largest brains – elephants and cetaceans (like whales) do. And monkeys are smarter than ungulates (horses, cows, sheep, etc) but have smaller brains. So while size may matter in some respect, it isn’t the end-all.

Encephalization, expressed by the encephalization quotient, or the extent to which the brain size of a given species deviates from the expected brain size based on a standard species of that same taxon, gets us a bit closer. Compared to the standard EQ for mammals, a cat, the human brain is about 7 to 8 times larger than expected (EQ=7.4-7.8). Dolphin brains, in comparison, are about 5 times larger than expected (and they’re pretty smart). The problem is that the EQ isn’t 100% perfect – for example, some capuchin monkeys, which are less intelligent than chimps and gorillas, have higher EQs.

So, can we use structural arguments to suggest humans are the most intelligent? Well, maybe, if we think outside the box of traditional brain “properties.” Both Roth’s article and Li’s article posit that the number of cortical neurons could be the “best” measure to date for intelligence (see Table 1). 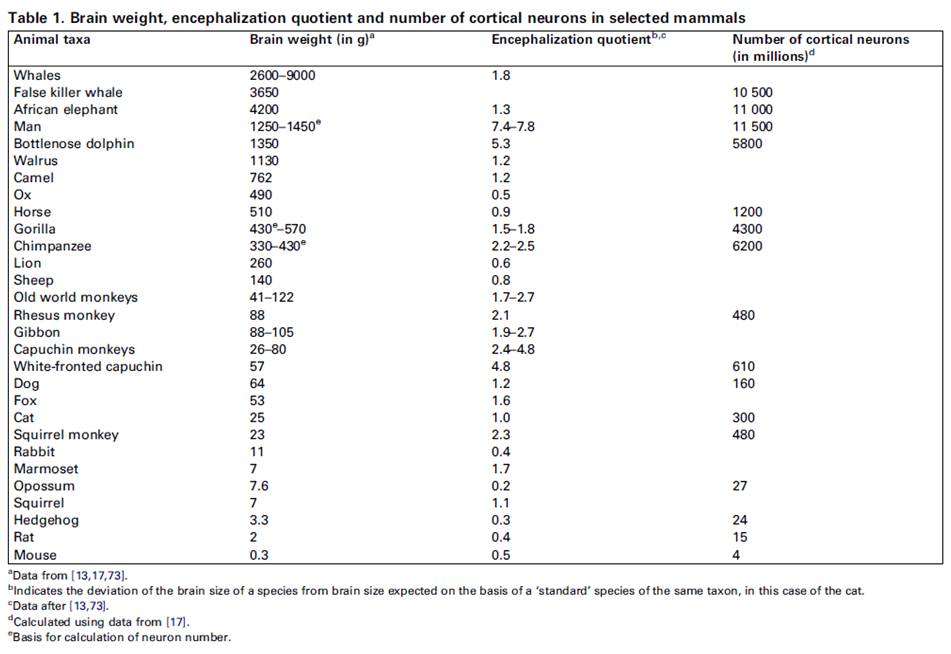 In this vein, Li et al. says the efficiency of brain structural organization may be an important biological basis for intelligence – the more efficient, the higher IQ.

So what makes human intelligence unique?

Stay tuned for part three, which, as I said above,  will discuss the intersection of intelligence and the Savanna Principle, and its ties to evolution and application to the “why” question.