Becky Jungbauer
It really isn't necessary for me to have an opinion on any topic at hand - it's so much easier to consult the latest poll to know how my fellow humans feel about an issue (and by extension, how I should feel about it too). Hermann Hesse writes that the bourgeoisie "substitute majority for power, law for force, and the polling booth for responsibility," so I should be able to substitute the results of an online poll for the firing of my own synapses.1

Dr. Rugbyologist writes in his article on statistical importance in architecture that "it is extremely important that we regularly convene panels of experts to tell us what is good and important." On the flip side, we have panels that tell us what is bad and superfluous.2 Thankfully, the folks at Slashdot have slaved night and day over their abaci,3 statistically proving what critical, life-altering possession is most important to retain to the end during a cash crunch. 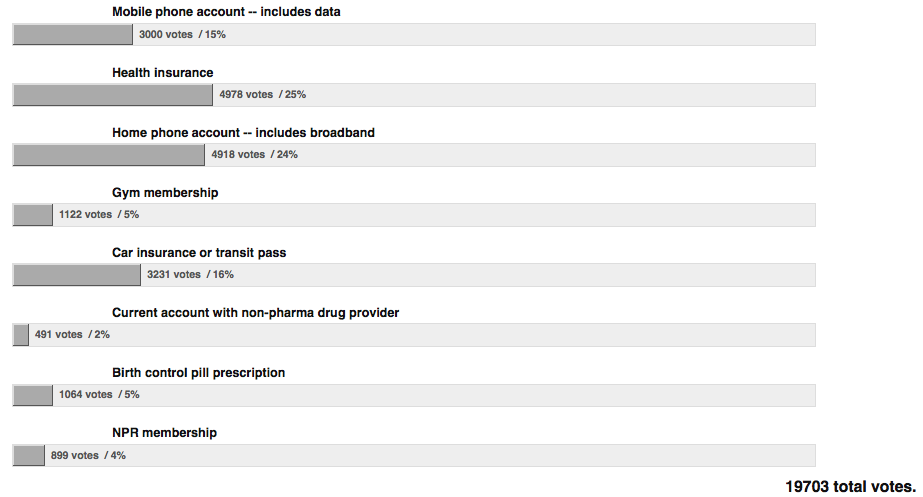 Remember that this is what you would let lapse last - health insurance and home phone/broadband coming out the clear winners - so looking at this another way, OTC/street drugs, birth control, gym memberships and NPR memberships would be first to go.

This is not surprising. Slashdot is proudly sloganed, "News for nerds." One would assume that birth control and gym memberships would not be a great loss, as computer nerds5 lack the social skills necessary to meet and seduce most women (with the exception of Jeff Goldblum and Jonny Lee Miller) - hence no need for prophylactics - and are either gangly Gumbys or Comic Book Man-esque, so they'd be as lost in a gym as George Bush is in a library. Vasectomies could also explain this trend, but my money's on the hooded cape, pasty skin and coke bottle glasses.

There are substitutes for street drugs - Cheetos and Red Bull render a surprisingly similar high to smack, or so says Keith Richards - and you can get news online, so really drugs and NPR are easy to ditch.6

The ones that threw my stereotype model for a loop were car insurance/transit pass and mobile phone/data account. One would assume that these underground lurkers make their moms drive them to the corner 7-11 or don't leave the house except for Comic-Con, so I'd think cars would be more dispensable. And who needs phones when you can talk to your virtual friends online through multi-player games?

The winners, health insurance and a broadband connection, make the most sense. A solid diet of aforementioned Cheetos and Red Bull while sitting on your ass 23.5 hours per day will result in some necessary trips to your friendly endocrinologist, and the broadband connection needs no elaboration. 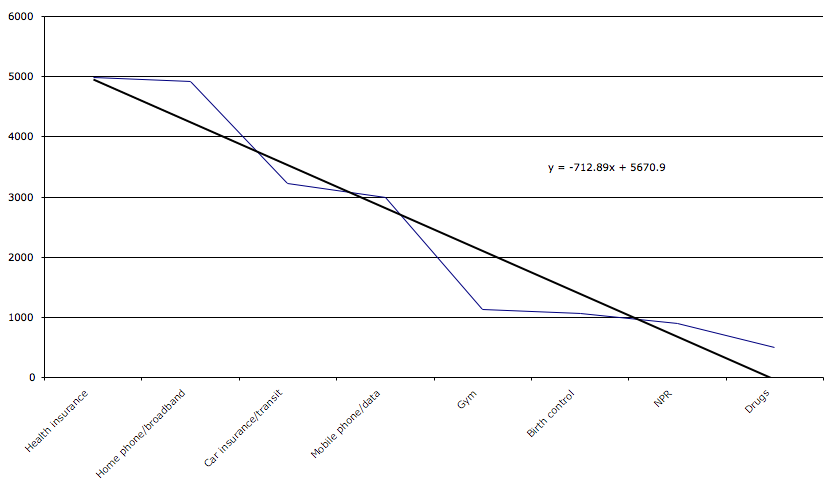 The top two are quite close (separated by only 60 votes), the next two are also close (231 votes), and the next two are within 58 votes of each other. Interestingly, these groups cluster in a logical fashion - how often you go to the gym is directly proportional to your need for birth control (girls, you're attractive; guys, you get girls that are attractive); if you have a car you'll need a mobile phone since you won't be tied to your home land line; and spending more time surfing the net than surfing the waves means you'll probably need hefty health insurance for your hefty waist.7

Why the poll is a bunch of statistical hooey, or, why gyms shouldn't despair

Now as everyone knows, rating or importance scales (such as the one above) tend to muddle data, so results are not actionable. Hence, I've applied a discrete choice model to the data called Maximum difference scaling (or MaxDiff). The MaxDiff model forces respondents to choose the best and worst (or in this case, most and least important) among a list of attributes; this also reduces bias. An example of MaxDiff in this poll follows: 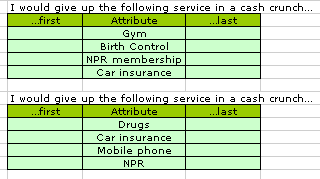 Attributes are rotated through at least twelve iterations of the task, showing each attribute an equal number of times. Responses are then analyzed using Hierarchical Bayesian techniques, resulting in "attribute importance" scores that show a priority among attributes. This allows greater discrimination between-attribute and between-respondent scores, and thus the results are more clear in showing a preference.

For example, in the Slashdot poll gym membership and birth control are separated by only 58 votes, and each is considered 5% of the total votes. How do you say which is more important than the other? In this instance, you can't - going off percentages, they're both ranked equally. So, what Slashdot should do is revise the poll and present Slashdotters with the MaxDiff task and see where WoWers' priorities really lie.

I did some polling of my own and came up with a few items Slashdot inadvertently (or advertently) left off the list, as well as some that were already there, and applied both the regular rank scale and the MaxDiff model.8 The higher the rank, the more important the attribute:9

"Which service would you let lapse last in a cash crunch?"

As you can see in the rankings set, health insurance and change control were tied for third most important, while changing my underwear and birth control were tied for sixth place. Yet with MaxDiff, the attributes' importance was teased out. Health insurance and change control flipped and were statistically significantly different, so in this case the ranking scale gave an inaccurate impression on their respective importances. However, changing my underwear was not statistically significantly more important than birth control, which pretty much explains itself.

Women's health pharma divisions, Hanes and Fruit of the Loom: you have your work cut out for you.


-----------------------------------------------------
1 Steppenwolf, by Hermann Hesse. Page 64 in my friend Dave's edition, which as far as I can tell was printed in England by Penguin Books in 1965 (the book's pages smell really old, and the only price on the back is in £, so my spidey sense says let's go with that as the correct identifying information).
2 Heparin from China, the movie Gigli, Microsoft Vista and the resurgence in 1980s clothing, to name a few.
3 According to the dictionary, the plural of abacus is either abaci or abacuses. I have a special place in my heart for plural forms ending in "i," therefore abaci was the winner.
4 The Montreal Canadiens hosted the game in which fans could vote for their favorite stars online. Something smelled rotten in the state of maple syrup when the starting lineups were comprised of only four teams, and all of the players for the Eastern conference were from the Canadiens until the end when a few others squeaked through (and none of the Canadiens were worthy of the distinction). Curiouser and curiouser, says Alice...
5 This does not apply to Patrick, as he is awesome and clearly superior to the average WoW player.
6 "Non-pharma drugs" does not include beer, as this would seriously skew the data.
7 I apply these to the U.S. only, as other countries for some asinine reason think it's a good idea to provide benefits for their citizens like health care, or have excellent modes of public transportation thus rendering a personal car a luxury rather than a necessity. Plus, NPR is just in the U.S. I condescendingly shake my Tea Party, gun-loving, gas-guzzling, going bankrupt because I can't afford health care fist at you, you socialists and your better quality of life.
8 They cover their news for nerds butts with this disclaimer on the poll: "Don't complain about lack of options. You've got to pick a few when you do multiple choice. Those are the breaks." Anarchists, the lot of 'em.
9 For a full data set, email Sue Doe-Dada.
A Truth Universally Acknowledged
More Articles All Articles
About