Gareth Fabbro
As my last few blogs have been a bit heavy on the science, I thought I'd write something a bit lighter.  So here are some pretty pictures of the fieldwork for master's project, when I went to Pantelleria to measure the CO2 degassing that was occurring there. Favare Grande, a fumarole on Pantelleria.
Never heard of Pantelleria?  Neither had I before I started my master's.  It is a little known volcano half-way between Sicily an Tunisia, and is a little bit of an oddity.  Africa is currently crashing into Europe, but despite this the area around Pantelleria is extending.  This is because Sicily is slowly rotating clockwise, and stretching the Sicily Channel.  It is this stretching that causes the melting that feeds the volcano.  This melting has lead to a couple of other submarine volcanoes in the region, including one of my favourites, Graham Bank.  This volcano briefly emerged above the waves in 1831 and was immediately the subject of a four-way political dispute over which European power could lay claim to it, which was only resolved a few months later when it disappeared once again. 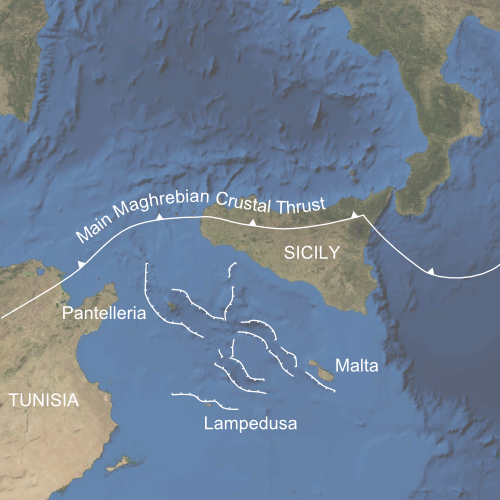 The location of Pantelleria, with the main tectonic structures after Catalano et al. (2009).
Pantelleria is special for a rare type of magma that is produced there and is named after the island: pantellerite.  Although there is little that can distinguish pantellerite from other magmas in the field, it's unusually high sodium and potassium content makes it of interest to petrologists.

Pantelleria also has some interesting structures.  There are two calderas, the Cinque Denti caldera associated with the 45,000 year old Green Tuff eruption, and the older La Vecchia caldera.  In the centre of the younger caldera sits Montagna Grande, whose origin was somewhat mysterious. 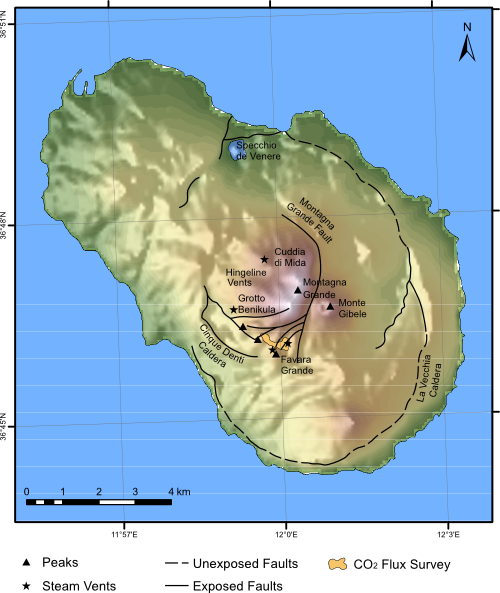 Map showing the main geological features of Pantelleria.  The area where I did my CO2 survey is also marked.  Geology after Mahood and Hildreth (1986).
Montagna Grande is the highest point on the island, but no vents sit at its peak.  As there were no uphill vents, it was suggested that Montagne Grande was what's known as an endogenous dome, or a dome formed when magma is intruded near the surface but doesn't break through and erupt.  Closer inspection of the mountain, however, shows that it is composed of stratified layers of lava and tuffs.  These must have flowed from some vent, and the most likely candidate is Monte Gibele despite the fact that it currently sits well below these flows.  How is this possible. 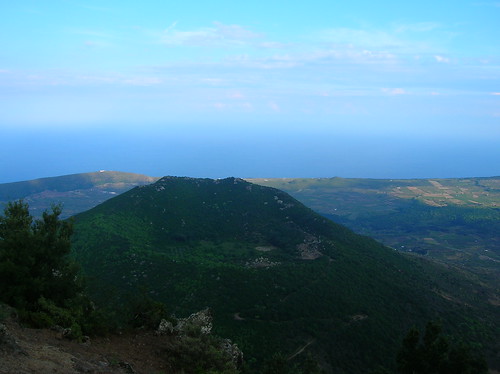 Looking down from Montagne Grande to Monte Gibele.  Monte Gibele has a classic stratovolcanic shape, but how could flows from it arrive above the vent they flowed from?
The observant among you may have noticed the big fault labelled as the Montagna Grande fault in the map above and may have correctly deduced that Montagna Grande did not always reach the height it did today.  Looking from the side, things become a bit more obvious.  Montagna Grande has been uplifted, although in a slightly unusual way; the eastern edge has been uplifted more than the western, rather like a trapdoor.  Indeed, this kind of uplift has been christened 'trapdoor uplift.'

Trapdoor uplift of Montagna Grande.  Taken from the south, looking north.  The difference in height between Montagna Grande to the left and Monte Gibele to the right is clear, and as the lavas on Montagna Grande were erupted from Monte Gibele it is clear there has been a large amount of uplift.
There are two possible causes for this uplift.  It could simply be an injection of magma at depth.  However, calderas often undergo a period of uplift shortly after they are formed.  A large eruption removes a large amount of material from the crust, and deposits it elsewhere.  The Cinque Denti caldera on Pantelleria has a volume of about 3 km3, so a similar amount of material must have been removed in the eruption.  This makes the crust lighter, so to compensate it "floats" higher ("Floats" is a gross simplification of the process of isostasy, but there isn't really room here for a proper discussion). 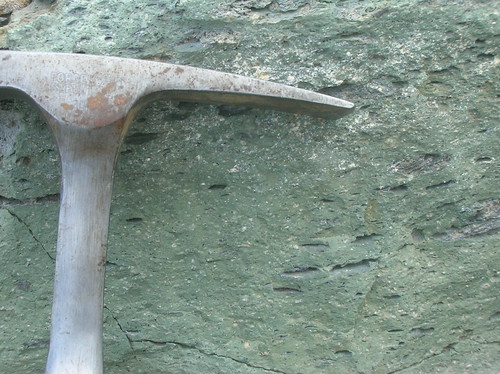 The Green Tuff, erupted at the same time as the Cinque Denti caldera formed on Pantelleria.  Named because it is green, and a tuff (welded here).
Usually uplift at calderas occurs in a dome shape, however the small size of the caldera compared to the thickness of the crust means at Pantelleria the deformation occurs as a block.  As the block 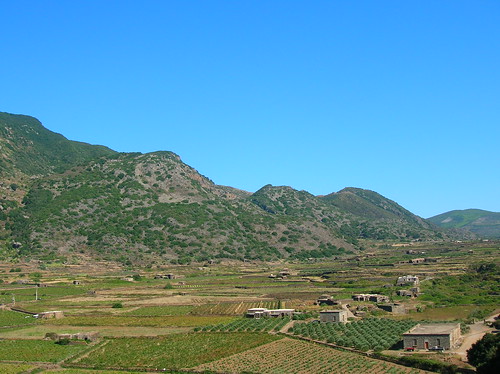 Line of vents along Montagna Grande.  Confusingly, the closest two are collectively known as Monte Gibile, which of course is no relation to Monte Gibele, with an 'e'.
For my master's project I went to Pantelleria to measure the CO2 that was being emitted through the soil around a fumarole called Favare Grande, where CO2 emissions had been measured before in 1998 and 2005.  To do this I had to lug around a piece of kit that used an infra-red laser to measure the concentration of CO2 and water in an analysis chamber placed on the ground.  The change in concentration with time gave the flux, or the rate of emission.  Although it was portable, it was not light, and there was no shade in the area. 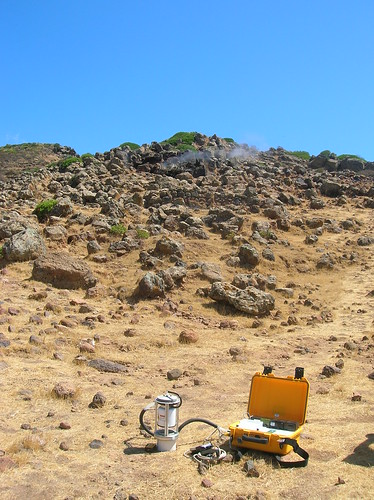 My portable Non-Dispersive Infra-Red (NDIR) gas analyser measuring CO2 flux in front of Favara Grande.
After measuring the CO2 flux at many, many points over the area I was studying, I could then map out its distribution.  Using this map I could then estimate that the total flu from the Favara Grande area was 475 tons a year, which is small compared to some other volcanoes such as Etna, or Mammoth Mountain in California, but large enough to remind you that there is still magma below Pantelleria.  The pattern shows that the CO2 is mainly reaching the surface along the faults that cross the area, which is to be expected as these will provide an easy path for the gasses to escape along. 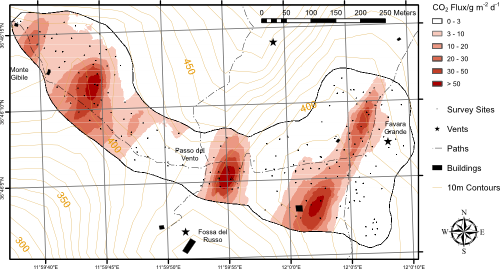 The distribution of CO2 flux around Favara Grande.
Although the last eruption was in 1891, there are still plenty of visual signs of volcanic activity on the island.  Around Favara Grande there are several other fumaroles, some of which used to be used to power thermal baths.  The buildings on Fossa del Russo have fallen somewhat into disrepair, though. 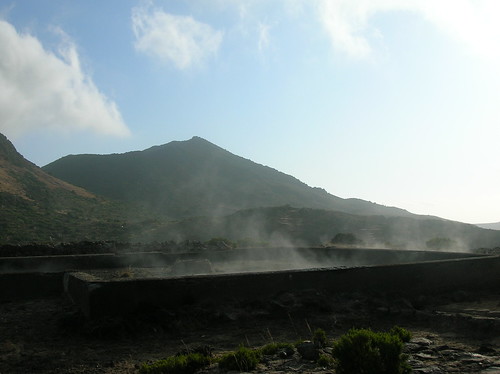 Old thermal bathhouse on Fossa del Russo, harnessing the steam from the volcano.
The other clue to the dangers lurking underneath the island is the fact the ground actually got quite hot.  Below is a before and after photo of the plastic collar I had to insert before placing the chamber of my gas analyser on top, after I stuck it into a particularly warm patch... 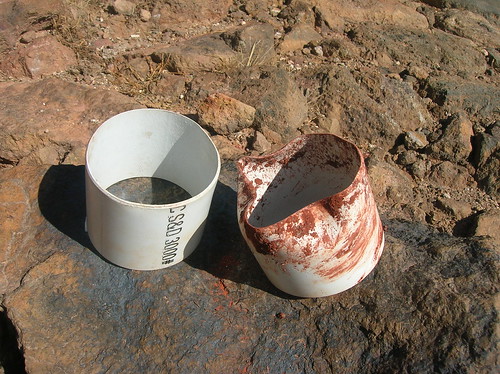 Plastic collar, melted by the warmth of the ground heated by the hydrothermal system.
The other danger I faced were the cows.  They weren't particularly aggressive, more curious.  The did have a fascination with my equipment, which calmly sat there buzzing away as it worked oblivious to the bovine interest. 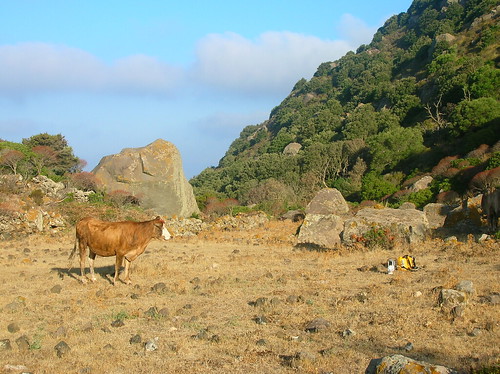 Curious cow is curious
Despite the heat and the hard work, I thoroughly enjoyed my time on the island.  If you'd like to see more photos, I have a Flickr set for the trip.  If you're interested in my work, I have also uploaded my master's project to Google Docs (download for a higher resolution version), but I wouldn't especially recommend reading it.  Finally, instead of leaving you with my customary sunset, instead I will finish with a sunrise.  The only way to beat the heat was to get up early, something I've never found easy... 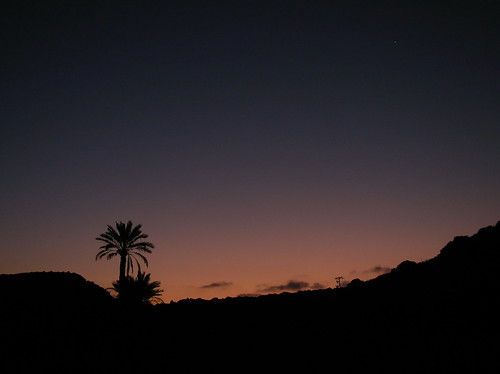