Remember that old expression about your fence, "the grass is always greener on the other side?" Although this may not be entirely true, a recent study shows that a daily dose of the green stuff may actually prove beneficial to both your mental and physical health.

Students attending college in San Marcos, Texas are taking advantage of their luscious green surroundings and are feeling quite good about it.

A.L. McFarland, a graduate student at Texas State University's Department of Agriculture, is head of a new "green" study which created data on the effects of outdoor interaction on a student's overall quality of life.

2334 students, 10% of the undergraduate student body, received e-mails with information and instructions on accessing an online survey. 373 undergraduates who responded rated their average use of the outdoor "green areas" around campus, like the football field, quad areas, or simply areas containing any form of grassy substance. 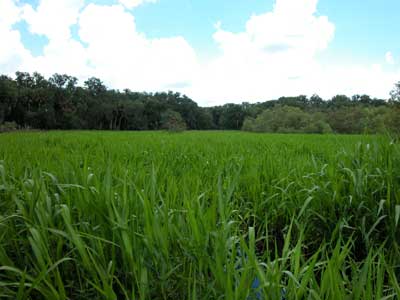 Students were ranked according to the following scale: low, medium, or high, depending on their usage of green areas on campus. Over 90% of those who responded ranked themselves as either "medium" or "high" users, and their perceptions on life were ranked positively as well. (An average of "4" was produced when these students were asked to choose between 1-5 according to their overall happiness.)

The results of this study also showed a connection between green area activity and an improved ability to apply knowlege learned within the classroom.

It seems there's just something about nature that gets the juices flowing within a student's brain and even impacts ability to obtain greater quality of life.

So go green. It's not just for environmentalists any more!

Article: A.L. McFarland, T.M. Waliczek and J.M. Zajicek, 'The Relationship Between Student Use of Campus Green Spaces and Perceptions of Quality of Life', HortTechnology, April-June 2008; 18: 232 - 238.