Chris Rollins
If you've ever been to a windy beach or a snow-blown landscape, you may have noticed a useless-looking fence with a pile of snow or sand on one side. The fence looks useless because it's full of holes - they're usually about 50% porous - and you might wonder what on earth they could be meant to control. It turns out that in windy conditions such a fence can cause a buildup of snow (or sand) on the downwind side, and that these fences are commonly used to prevent snowdrift across roadways as well as provide a measure of control over where snow or sand might build up.

It seems counterintuitive that a fence would cause buildup on the downwind side instead of the upwind side. This essentially means that most of the snow makes it through the fence. But imagine the fence as a wind barrier instead of a snow barrier: as the (mostly) straight flow comes in and hits the fence on the upwind side, it is disrupted and becomes turbulent on the downwind side. Turbulent flow has a significant amount of rotational motion as opposed to linear motion, which effectively decreases the speed of the snow in the wind direction - causing some of the snow to settle on the far side of the fence. 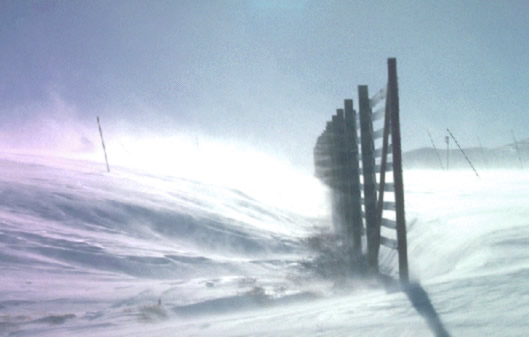 Snow Fence in Action: A snow fence creates a large accumulation of snow downwind, allowing engineers to control the placement and size of snowdrifts. Photo Credit: University of Colorado, Boulder

As the wind keeps blowing, snow accumulates on the downwind side in a particular pattern based on the height and porosity of the fence. According to the University of Wyoming's Water Resources Data System, the pile of snow begins small and slopes more dramatically on the side farthest downwind. This region becomes a recirculation zone, which quickly begins catching snow and filling in. Eventually, the snow reaches a peak six times the height of the fence downwind and slopes down for another twenty-eight fence heights. Once the accumulation of snow has reached this level, no more snow is taken from the blizzard and the fence has reached its capacity for "holding" snow.

Filled to Capacity: The size of a downward drift created by a snow fence follows some empirically determined characteristics and are dependent on fence height. Photo Credit: University of Wyoming's Water Resources Data System

In addition to keeping snow from piling on the road, snow fences also keep  snow from blowing across the road. This effectively keeps the temperature of the road higher and slows down ice formation - leading to lower accident rates and fewer road closures.

Snow fences are actively used on many highways in snowy areas, but their placement and configuration isn't really an exact science. That's where Stuart Chen, an engineer at the University of Buffalo, comes in. He's developed software that takes in far more considerations than is common for snow fence design. To accurately size and place a snow fence, designers must take into account local climate conditions as well as the fluid dynamics principles that determine the behavior of the wind and snow as it blows through a fence. Chen's software, "SnowMan," does that automatically for maintenance workers.

"SnowMan allows users to analyze different types and heights of virtual snow fences in a variety of distances from a given roadway so that it is possible to come up with the best solution for a specific site and climate," said Chen.

The software has a large amount of climate data for the upstate New York area and incorporates fieldwork done by Ronald Tabler, a leader in snowdrift analysis and snow fence engineering. It was developed for the New York State Department of Transportation, but should be applicable anywhere in the nation that snow drift causes problems.

"The NYSDOT believes that the SnowMan software will significantly advance the implementation of passive snow-control measures both within New York State and nationwide," said Joseph F. Doherty, senior civil engineer, operations division, NYSDOT, Albany. "It provides an important tool that will facilitate designers' use of decades of research, by Ronald Tabler and others, in the field of blowing snow control."

All said, snow fences provide an effective way to passively control snowdrift. They save money by reducing plowing costs and reduce costs to motorists who may find themselves in dangerous accidents on slippery roads.

Doherty is optimistic about the impact of SnowMan: "We expect improvements in highway safety, lower winter maintenance costs and reduced impacts on the environment as a result."

---
Basics of Blizzard and Snowdrift Control at the University of Wyoming
Tabler&Associates, a  snow fence engineering company with some cool pictures
Welcome to my Moon Base
More Articles All Articles
About