Ashley Cox
Imagine a future for ice cubes that burn, it may sounds impossible but gas hydrates are an alternate energy source said to put every other fossil fuel to shame.

Gas Hydrates are an ice-like solid composed from the bonding of water and natural gas molecules. The lattice-structure traps gas particles (mostly methane) within the ice. Hydrates form under the low temperatures and high pressures of the ocean floor, usually at depths greater than 500 meters and are primarily found to occur within sedimentary deposits along continental shelves and also beneath Arctic permafrost. The exact amount and whereabouts of the world's hydrate supply is unknown, but technological advances are pushing science closer to these answers.

"It's not frozen gas," explains Timothy Collett of the U.S. Geological Survey in Denver. "Its [formed] from the interaction of gas and water."

Scientists first became interested in gas hydrates in 1982 when it was discovered during the Deep Sea Drilling Project off the Pacific Coast in Guatemala. Samples retrieved were studied and once word spread of the burning capability of this frozen gas, numerous studies have taken off and a race for alternative fuel sources began. 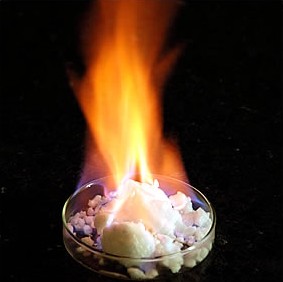 Pacific Northwest National Laboratory researchers have joined with leading scientists worldwide in a collaborative effort to pursue a massive energy reserve that, by itself, could keep America powered into the next century. Ice-like gas hydrate trapped within rock deep below the Earth's surface may hold promise for new energy resources.

"Twenty-three percent of the Earth's surface is covered by permafrost
and may have hydrates beneath it," says Collett. The amount of frozen
hydrates for potential fuel use greatly out stands conventional gas
resources two-fold.

As the hydrates are removed from under the ocean's surface, the substantial difference in temperature and pressure causes the hydrates to melt, releasing harmful methane gasses into the atmosphere. This lack of stability within the compound poses a threat to both scientific research and to the Earth's climate as well. Scientists are working to find a more efficient way of retrieving these gas hydrates in a way where they retain stability. Instead of mining for solid masses of frozen hydrate, they're predicting the possibility of melting the compound while underwater and harnessing the gas similar to the manner of harnessing natural gas now.

On the plus side, the USGS predicts the worldwide amount of methane in gas hydrates to contain at least 1x104 gigatons of carbon (in a very conservative estimate.) They go on to mention that for every cubic foot of solid hydrate, 160 cubic feet (4.5 cubic meters) of natural gas is released.This is about twice the amount of carbon held in all fossil fuels on Earth!

According to the United States Geological Survey, estimates for the amount of gas trapped within the frozen hydrates worldwide exceed the following, per trillion cubic feet:
Oceanic hydrates: 30,000 to 49,100,000 x 1012
Continental sources: 5,000 to 12,000,000 x 1012
This cripples current day convention gas resources which lay at 13,000 x 1012
USGS scientists believe the world will most likely not see significant production from gas hydrates for another thirty years, while all technical issues are resolved. There is not yet enough known about these frozen reserves to base complete extrication of them, but once more is understood, the application of this fuel source will be beneficial for nations all over the world.

A USGS mapping of all locations of known and inferred gas hydrate occurrences in oceanic sediments of outer continental margins and permafrost regions.  Only a limited number of gas hydrate deposits have been examined in any detail.
"We're interested in gas hydrate because we believe these deposits have played an important role in ancient global climate change," explains Michael Riedel of Natural Resources Canada's Geological Survey of Canada, IODP Expedition 311's co-chief scientist.

The natural release of methane gas has led theories to what many believe caused an end to the last ice age. Earthquakes or erosion may have led large pockets of methane gas to have been released into the atmosphere, considerably changing global temperatures.

Methane is 20 times as effective as carbon dioxide as a greenhouse gas, and gas hydrates may contain three times the concentration of methane than what is present in our atmosphere today. Underwater pressure and temperature changes, sea-level fluctuation, and natural undersea movements may release the methane gas leading to considerable change in a long-term rise in global temperatures.

On the other hand, scientists predict that global warming may warm the oceans enough to melt the hydrates as well. So the presence of hydrates melting causes global climate change, and that causes further melting of the hydrates which leads to a greater release of gas into the atmosphere and so on. Its a never ending cycle of global warming!

Despite the risks of offshore drilling and natural gas secretion, gas hydrates provide a promising alternate fuel source that may bring nations worldwide one step further from an imminent energy crisis.

Fun Fact: Remember the tales of the mysterious Bermuda triangle? The disappearance of ships in these waters led to the birth of sea monsters, alien abductions, and inter planetary vortexes; but, with the finding of natural gas hydrates in this area a more logical answer to the unsolved mystery may be supplied. As previously stated, pockets of gas may be released from beneath the ocean floor in manners of erosion, landslides, earthquakes, etc. and when the gas is released, a low density foam is generated, plummeting the ship beneath the ocean's waters. Voila'! Mystery solved! (But hey, if alien abductions seem more logical to you, well, to each his own I suppose.)
Variety Tap
More Articles All Articles
About