Researchers from the University of Leicester and the British Geological Society (BGS) have proposed storing carbon dioxide in huge underground reservoirs as a way of reducing emissions- and have even identified sites in Western Europe that would be suitable.

Their research, published in the journal, Planet Earth, reveals that CO2 can be contained in cool geological aquifers or reservoirs, where it can remain harmlessly for many thousands of years.

PhD research student, Ameena Camps, is working with Professor Mike Lovell at the University's Department of Geology and with Chris Rochelle at BGS, investigating the storage of CO2. 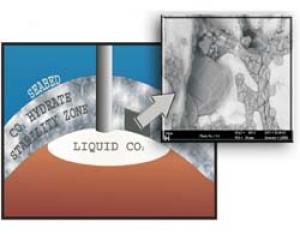 Schematic diagram representing the proposed storage as a liquid and hydrate, with an example image of crystalline carbon dioxide hydrate grown in sediment. (Image courtesy of University of Leicester)

Storing the gas in a solid form as a gas hydrate, or as a pool of liquid CO2 below a cap of hydrate cemented sediments, is believed to offer an alternative method of geological sequestration to the current practices of storage in warm, deep sediments in the North Sea.

Recently quoted in Planet Earth Ameena Camps explained: "Hydrates (also known as clathrates) are ice-like crystalline minerals that look like normal ice and form when gas and water freeze together at low temperature and high pressure. They are made of a cage of frozen water molecules with the gas molecules trapped inside."

Although gas hydrates were first discovered two centuries ago, the possible use of carbon dioxide hydrate as a means to help resolve problems of global climate change, and of naturally occurring methane hydrate as a future source of energy, have only recently been suggested.

Laboratory experiments carried out as part of Ameena Camps' PhD project have indicated that carbon dioxide hydrate should form stable structures in sediments under oceans. By employing geophysical techniques and computer modelling, Ms Camps has identified a number of sites in Western Europe with the potential to store carbon dioxide by this method.

She is also exploring further implications of her research that may benefit geologists' understanding of the stability of deep submarine slopes and contribute to improvements in global water supplies through further understanding of desalination processes.

Professor Mike Lovell, of the University of Leicester Department of Geology commented: "Ms Camps' work is at the forefront of gas hydrate research, and has produced some very exciting results, highlighting the importance of investment in further studies of hydrates.

"Investigations of natural methane hydrates will help our understanding of their role as a natural hazard, while carbon dioxide hydrates are a potential sink for greenhouse gas emissions. This work also has application in other fields such as space research into hydrates on other planetary bodies."

Note: This article has been adapted from a news release issued by University of Leicester.