Ashley Cox
When I write in that title, a 'new Ice Age beast', I'm talking about the Coelodonta Tologoijensis. of course! That's Woolly Rhinoceros for us non-palaeontologists. After 460,000 years of being in the great Mammoth's shadow, this giant rhino is finally receiving it's place in the spotlight.

Previously believed to have wondered specifically through just Northern Europe, the latest discovery of a Woolly Rhinoceros skull shows that this magnificent species roamed throughout central Germany as well. The skull was discovered in more than 50 fragments over a century ago in a gravel pit at the foot of the Kyffhäuser range near Bad Frankenhausen. The pieces have finally been put together by Weimar's Senckenberg Research Institute, making it the most complete Coelodonta tologoijensis skull in Europe. This reconstructed specimen provides the first evidence that the woolly rhinoceros species had advanced into Europe even before the first glacial stage. "This is the oldest woolly rhinoceros found in Europe, and it gives us a precise date for the first appearance of cold climate animals spreading throughout Asia and Europe during the ice ages. The characteristic species of mammals emerged together and across the continent", said palaeontologist Ralf-Dietrich Kahlke.

This woolly rhino was dated to be 12 years of age and lived during the Pleistocene Epoch, when ice sheets advanced into the mid west from its center in Canada and likewise, deep into Germany from a centered Scandinavian Shield. This period occurred roughly 650,000 years ago and lasted 50,000 years, allowing mammals such as the rhino, woolly mammoth, wolves and giant bison adequate time to adapt to newer and colder surroundings.

Remnants of these gigantic mammals have been found throughout Northern Europe as well as in the UK, Germany, China, Asia and some have also been dug up in Africa. The skeletal findings in China and Asia are of ancestors to the Woolly Rhino said to have evolved nearly 2 million years ago. The dry climate and fluctuating seasons in these areas explain how the Rhino easily adapted to foraging for food in harsh winter climates 460,000 years ago. The diet of the Coelodonta during this time consisted of leaves and shrubs, but with the landscape quickly desertified by climate change, the animals adapted and began browsing for food closer to the ground.

"Analysis of the Frankenhausen specimen shows that Coelodonta Tologoijensis carried its head low along the ground and had a lawnmower-like mouth with a huge set of grinding teeth. As the climate became colder, these animals became more efficient at utilizing the available food ", says Ralf-Dietrich Kahlke.

From the family Rhinocerotida, which includes the modern species of rhino we see today, this herbivore was approximately 11 feet in length and came equipped with long hair, small ears, short thick leg, a stocky body and two horns on its snout (the larger reaching a length of 3 feet.) The rhinoceros was quickly able to scavenge for food lower to the ground when plentiful sources became scarce due to declining global temperatures. This ability of adaptation led to the rhino's long existence throughout the ice age. 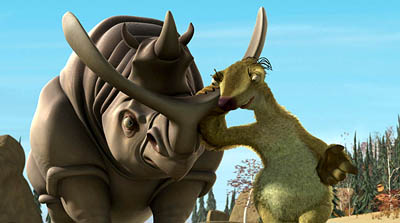 Remember those rhinos from the first Ice Age movie? They did seem out of place didn't they, that's just because they were missing the fluffy fur rhinos of that time had, and they had a really creative horn structure. The reconstructive picture shows more accurately the philosophy of the woolly Rhino. Although fragments of body and skull are continuously found even today, the Rhinoceros’ shape was first depicted from prehistoric cave drawings found in southern France. Palaeontologists based summaries on these pictures until a completely preserved specimen was discovered in a tar pit in Starunia, Ukraina. The unique combination of clays and oils which the animals had sunk into is responsible for the almost perfect preservation, allowing the specimen to be displayed in the Polish Academy of Sciences Museum of Natural History in Kraków. (see photo below) Like many giants of the Pleistocene era, the woolly rhinoceros have been extinct for quite some time; latest skeletal findings are predicting their disappearance at about 30,000 years ago. This was probably the result of not only rapid climatic changes, but also from hunting by early humans, showing that we must do what we can now to preserve the native species we have left in this global period of time.
Variety Tap
More Articles All Articles
About