Mad Scientist
The birth of twins is a genetic oddity in itself - only happening in about one out of  every 90 births.  But adding a large twist of unexpected to an already unlikely event - this week it was announced that a mother in Dallas, Texas gave birth to a set of twins last year that aren't actually paternal twins, but instead are half-brothers.  Yes, they both clearly have the same mother - but  it has since been determined that the boys have two different fathers. 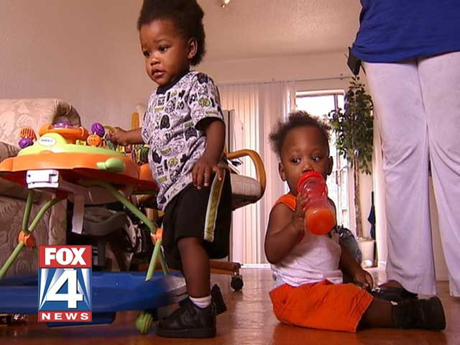 Mia Washington gave birth to two boys seven minutes apart, 11 months ago.  However, as the boys, Justin and Jordan, got older - her fiance (and supposed father of the boys) noticed that they really didn't look anything alike, and actually had very different facial features.  The couple went to a DNA clinic in Dallas, and the results of the test showed that there is a 99.999% chance that Justin and Jordan did not have the same father.  Shortly after the results, Mia revealed that she had not been faithful to her fiance around the time that the boys were conceived.  Shocker.

Mia said, "I have twins who have different dads. It was the weirdest thing to think that two little babies could have grown in my stomach together and been born seven minutes apart but yet have different fathers."

I'm sure that's what her fiance was thinking, "Yeah. Weird."

Though Washington's case is rare, doctors have a scientific name for this: heteropaternal superfecundation (a.k.a. genetically-delivered "karma").  So how does this happen? Sky News’s health correspondent Thomas Moore explains:

"A woman can release two eggs from her ovaries, and the eggs will remain viable for 24 hours after ovulation. Sperm can survive up to five days inside a woman’s body, so a woman could sleep with different men several days apart, and get pregnant not once, but twice."

In the case of fraternal twins, a woman has ovulated more than once in a given month, thus releasing more than one egg. If this occurs and each egg is fertilized by sperm cells from the same man, fraternal twins are formed that have the same father.

While extremely rare, it is possible that each egg is fertilized by sperm cells from two different men, thus forming twins with two different fathers, called bi-paternal twins.  It is estimated that fraternal twins make up about 2% of the world's population.  According to recent studies published by the National Institutes of Health, it is estimated that approximately 1 in 12 fraternal twin sets are bi-paternal, meaning that each twin has a different father.

Seriously?  So... 2% of the world's population is made up of fraternal twins.  And one in 12 of those sets of twins (8.3%) are bi-paternal and actually have different fathers because their mother slept with more than one man at the time she conceived?

Really?
That many women, errr... mothers, are (ahem)... playing the field?
I seriously had no idea.

So I guess the only thing that is rare about this particular instance is that the media happened to get a hold of it.
Hmm.  I'm not feeling terribly warm and fuzzy about the sanctity of marriage, or "committed relationship," or whatever.

To the finance's credit, he is still in the relationship, still engaged, and planning to raise both boys as his own.  And as a footnote, the couple is now currently expecting another baby next fall - a little girl.

Dude, I don't mean to view the world as a glass half-empty, but you may want to have the paternity lab on speed dial after the birth - just in case.
Weekly Weird Science
More Articles All Articles
About

Bringing you the strange happenings in the world of science. And I'm not really that mad, just a little upset....