Home > Neuroscience > Welcome to my Moon Base

Chris Rollins
What color is the number 7? How does a symphony taste? What temperature is a muted television? A synesthete could tell you, with great certainty and consistency, the answers to the above questions, and describe many more sensory associations that seem irrelevant to most people.

Approximately 1 in 1000 people experience synesthesia - the elicitation of a sensory response independent of the stimulus itself. For instance, viewing a number or hearing a phonetic sound may elicit a colored response in the visual field, or a certain visual stimulus may elicit an auditory response.

"I realized that to make an 'R', all I had to do was first write a 'P' and draw a line down from its loop. And I was so surprised I could turn a yellow letter into an orange letter just by adding a line," reports Patricia Duffy in her book Blue Cats and Chartreuse Kittens, which describes many such experiences. Duffy has the most common form of synesthesia, known as grapheme-color synesthesia -- where individual letters or numbers are shaded specific colors.

A word of a different color: Grapheme-color synesthetes see specific letters and numbers as specific colors. Some are even able to tell if a word is spelled correctly by its color. Photo Credit: Wikipedia

As is found in all synesthetes, the sensation produced by a specific stimulus is both vivid and constant. In the 1980's, researcher Simon Baron-Cohen (sibling to the infamous Sasha) produced results from a test he developed called the Test of Genuineness for Colored-Word Synesthesia -- a questionnaire that asked possible synesthetes to identify the color of a certain word and then take a retest a year and a half later. On average, real synesthetes responded with 93% accuracy to their original word-color associations despite the long amount of time between testing periods. Tests such as these prove the validity of synesthetes' experiences -- since memory would not be adequate over such a long time span.

Stroop Test: Try naming the colors of the words above instead of the word itself. Although tricky for everyone, synesthetes often score below average unless the color of the word matches their elicited response for that particular word -- in which case they do better than average. Photo Credit: University of Michigan

"The jumbled mass of lines gave various tones, which changed as my eyes traveled round the picture. When looking at the large multicolored powerful circle at upper left, I get a pure tone which can be too much, so to relieve my mind of this I travel back to the cacophony of jumbled lines and shapes. This painting therefore is a good balance of contrasting noise – pure tones and cacophony – which was a delight to see. The more I looked at it, the more I came to appreciate the image and to like the 'music'." 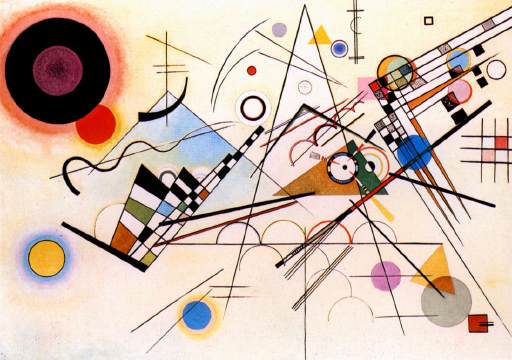 Recently, Melissa Saenz and Christof Koch at Caltech identified a previously unobserved type of synesthesia where movement is translated into sound, such as pops or beeps. In a test where subjects were asked to identify sections of Morse code either visually or audibly, most participants scored higher on the auditory section, as auditory patterns are often much easier to detect. A few with movement-sound synesthesia, however, scored equally high on the visual section -- presumably because they heard sounds as the visual stimulus was presented. Saenz and Koch estimate that as much as 1% of the population has movement-sound synesthesia, but that it is often not detected because movement usually does accompany sound in normal life.

This type of overlap in experience has been the subject of much research in the last few years. Previous knowledge suggested that individuals' elicited responses were unique to that individual, but many research psychologists have recently found levels of consistency between different synesthetes, as well as between synesthetes and non-synesthetes. Julia Simner of the University of Edinburgh and Dr. Ward have found that grapheme-color synesthetes will often associate common letters or numbers with equally common color terms used in language. For instance, many synesthetes associate the letter 'a' with the color red. Additionally, Daniel Smilek of the University of Waterloo has found that the luminosity of a color associated with a letter is directly related to the frequency of use of that letter. Interestingly, both synesthetes and non-synesthetes associated individual letters this way, although the correlation is much stronger with synesthetes.

The similarities aren't limited to grapheme-color synesthetes. Dr. Ward conducted an experiment where he asked music-color synesthetes to paint or draw what they saw while listening to certain musical pieces. When non-synesthetes were asked to identify which painting went with the music, many of them were able to correctly identify the painting created by the synesthete over control paintings -- suggesting that all of us have some level of cross-talking between our senses.

Crossovers between sensory experiences, therefore, may be more intrinsic to our brain function than previously thought. Other research by Ben-Gurion University has created synesthesia-like experiences in non-synesthetes through post-hypnotic suggestion of synesthetic relationships. The participants in that study failed tests that actual synesthetes often fail -- for instance, being unable to identify a black seven on a red background if the researchers suggested that the number seven produce a red color response.

As usually happens with psychological research, delving deeper into the mysteries of the brain often creates more. How we process sensory information is still largely a mystery to psychologists -- but synesthetes offer a unique way to study the brain in general, even if their experiences are unique.

---
Think you might be a synesthete? Take the Synesthesia Battery to find out (and contribute to research!)
Also, take an interactive Stroop Test, if you dare.
Welcome to my Moon Base
More Articles All Articles
About