Home > Psychology > Welcome to my Moon Base

Chris Rollins
The word "hypnosis" conjures a very specific image to most people - usually a man dangling a watch on a chain in front of your eyes and making you count backwards until you fall into some sort of deep trance, where the hypnotist can make you squawk like a chicken or convince you there are bugs in your pants.

Judging by the stupid things subjects often do during a hypnotist's show, people often conclude that hypnosis gives the hypnotist total control over his subjects like a puppeteer pulling strings on a marionette. As a result, people don't often think of hypnosis as a viable medical treatment and end up relegating it to the world of crackpot medicine. Lately, however, hypnotic treatments are being used more and more frequently, often for pain relief purposes. 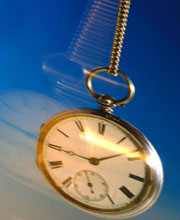 You Are Getting Sleepy: Hypnotism is being used more and more often for to relieve pain and anxiety during uncomfortable procedures. Photo Credit: Creighton University Medical Center

Can something as simple as falling into a trance really prevent you from feeling pain? At first glance, it seems unlikely - something as painful as surgery or childbirth should be able to break through a mere mental state. Hypnosis has, however, been reported as an effective treatment for pain mitigation in both of these situations and is quickly gaining reputability among physicians as a cheap and effective way to reduce pain perception.

So how does hypnosis treat pain? Normally, when a part of the body experiences pain it sends a signal through the nervous system to the spinal cord, where it is processed and sent to the brain stem. The signal then propagates through the mid-brain region to the cortical region (where the sensory cortex is located), which creates the conscious sensation of pain. Normally, this conscious sensation of pain is beneficial for an organism - it keeps us from needlessly damaging our limbs when, say, they get a little too close to the fire. With modern medicine, though, we obviously need to experience some physical trauma for the greater good of our health, making the pain useless.

In 2004, researchers at the University of Iowa Roy J. and Lucille A. Carver College of Medicine and the Technical University of Aachen, Germany, tried to identify the exact effect of hypnosis on the brain using functional magnetic resonance imaging (fMRI). fMRI measures blood flow in the brain and can be used to view activity in different regions of the brain in real time. More blood flow indicates more activity. To conduct the experiment, the researchers asked participants to first identify when a hot surface became painful to the touch (an eight on a scale from zero to ten) and used fMRI to determine where the brian sent the pain signal. They then hypnotized the subjects and gave them suggestions aimed at reducing pain while increasing the temperature on the surface to the level previously reported as painful.

"The major finding from our study, which used fMRI for the first time to investigate brain activity under hypnosis for pain suppression, is that we see reduced activity in areas of the pain network and increased activity in other areas of the brain under hypnosis," said Sebastian Schulz-Stubner, M.D., Ph.D., UI assistant professor (clinical) of anesthesia and first author of the study. "The increased activity might be specific for hypnosis or might be non-specific, but it definitely does something to reduce the pain signal input into the cortical structure."

So what really changes under hypnosis is the perception of pain. Unfortunately, scientists have absolutely no idea what mechanism creates the appropriate signals to nullify pain. "Imaging studies like this one improve our understanding of what might be going on and help researchers ask even more specific questions aimed at identifying the underlying mechanism," Schulz-Stubner said. "It is one piece of the puzzle that moves us a little closer to a final answer for how hypnosis really works."

Regardless of the mechanism, the study shows that hypnosis can have a measurable effect on the brain and that it can be used in a clinical setting, at least to assist anesthesia. A new study by the University College London suggests that hypnosis may be able to help more readily in a situation that nobody finds comfortable - a trip to the dentist. Researchers had participants breathe either pure air or air with 25% nitrous oxide through a scented mask to hide the sweet smell of the laughing gas. The participants were then given a series of mental images and were asked to rate how vivid the image was - a more vivid image corresponds to higher suggestibility. Participants on the nitrous oxide were approximately 10% more susceptible to the imagery: some even answered questions posed by imaginary suggested  people in the corner of the room.

Dr Matthew Whalley, Honorary Research Fellow at UCL, says: "Nitrous oxide is one of the most widely used yet least well understood anaesthetic gases and until recently, relatively little was known about how it worked inside the body.... The gas may have caused volunteers to partly withdraw from their reality of actively taking part in the tests, so that they felt less in control of their actions and felt that the suggested effects were happening by themselves."

As is common with psychology, larger scale studies are needed to determine the nuances and real efficacy of hypnotic pain relief. One easy way might be to promote learning about hypnosis in the clinical world by training physicians or specialists to hypnotize their patients. But at the very least, it's worth trying for a person who may have trouble paying for expensive anesthesia drugs or may undergo complications as a result of anesthesia.

Now that there is some hard evidence of changes in brain patterns under hypnosis, Shulz-Stubner is optimistic about the future use of hypnosis: "More practically, for clinical use, it helps to dispel prejudice about hypnosis as a technique to manage pain because we can show an objective, measurable change in brain activity linked to a reduced perception of pain."
Welcome to my Moon Base
More Articles All Articles
About