Home > Space > Welcome to my Moon Base


Obviously, the uncertainty inherent in any of the above values is quite large. More than one can assume any value from 0%-100% -- for instance, the fraction of planets capable of supporting life that actually do. Some researchers are so convinced by the will of life to create itself that they will put the percentage quite high, while others see life as a far rarer accident of nature. As a result, the estimated number of intelligent civilizations fluctuates wildly depending on who you ask.

If the Drake equation can't accurately predict the number of intelligent civilizations in the galaxy, then what is its value? The equation presents the questions we need to answer in order to investigate life on other planets. How many stars do have planets orbiting them? And how many of those are capable of supporting life? Luckily, there are teams of astronomers all over the world looking to answer just those questions. 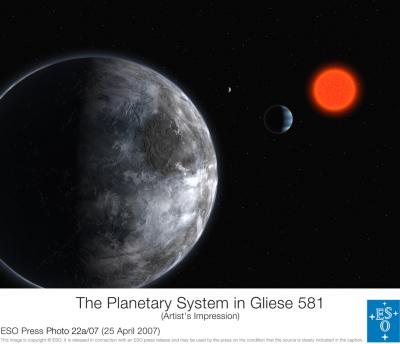 Is There Anybody Out There?: An artist's rendition shows planets orbiting the star Gliese 581. One planet detected may have the conditions necessary to support life. Photo Credit: European Southern Observatory

The detection of exoplanets (a term used to describe planets that orbit stars other than our own sun) has taken off since a Swiss team discovered the first in 1995. They used a technique called the radial velocity method to detect a very large gas planet orbiting very close to its parent star, 51 Pegasus. Since then, well over 150 exoplanets have been discovered, many of them large gas giants orbiting close to their parent star.

Since gas giants in close orbits exert the largest gravitational pull on their stars, they are by far the easiest exoplanets to discover. As the planets orbit, they cause a slight incease in the speed of the star directed toward the planet - leading to a slight difference in the frequency of light detected here on Earth due to the Doppler effect. Telescopes measure that frequency shift and astronomers can use the data to determine the approximate mass and orbital characteristics of the planet.

Until recently, telescopes were only capable of detecting large gas giants, all of which would be uninhabitable for life as we know it. Astronomers believe that any planet harboring life would have to be located in the "habitable zone" of a star, an area where the amount of heat incident on a planet would provide appropriate temperatures to create liquid water. The planet would also have to be rocky, instead of gaseous. Since rocky planets tend to be less massive than gaseous planets, they have previously been difficult to discover using the radial velocity method.

In 2007, a team of Swiss, French, and Portuguese scientists discovered a very Earth-like planet using the radial velocity method and a device called HARPS (High Accuracy Radial Velocity for Planetary Searcher) attached to the ESO 3.5 meter telescope in Chile. The planet orbits the star Gliese 581 and has a radius about 50% greater than Earth's. Models also show that the temperatures on the surface should range from 0-40 C -- appropriate for the formation of liquid water.

"Liquid water is critical to life as we know it," avows Xavier Delfosse, a member of the team from Grenoble University (France). "Because of its temperature and relative proximity, this planet will most probably be a very important target of the future space missions dedicated to the search for extra-terrestrial life. On the treasure map of the Universe, one would be tempted to mark this planet with an X."

NASA, however, plans on using a different strategy for finding rocky planets called transit photometry. This method measure the light intensity of a star and looks for the dimming that would occur if a planet passed between the star and Earth. Kepler, a new mission that will be launched this year, will search for planets that have approximately the same mass as the Earth and lie in the continuously habitable zone - meaning that the planets' orbits never deviate too far or too close to the star to either evaporate or freeze any water that might be present. At this time, no other planet-finding telescopes are able to search for planets in this unique condition.

Other recent developments have inspired the wonder and awe appropriate for this kind of work. In November 2008, University of California, Berkeley astronomer Paul Kalas took the first ever visual light picture of an exoplanet. The planet has a mass about the same as Jupiter's and orbits a star called Formalhaut. "I nearly had a heart attack at the end of May when I confirmed that Fomalhaut b orbits its parent star," Kalas said. "It's a profound and overwhelming experience to lay eyes on a planet never before seen." 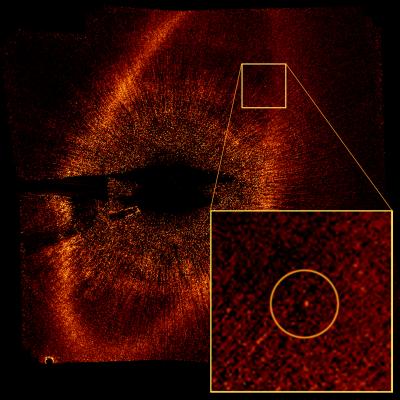 A Few Exciting Pixels: This Hubble photo is the first-ever optical wavelength photo taken of a planet outside our solar system. Photo Credit: Paul Kalas/UC Berkeley

Additionally, two independent research groups have just submitted a paper detailing how they observed the atmosphere of a planet named OGLE-TR-56b from a ground-based observatory. All other atmospheric observations of exoplanets has been done from space.

"Others have tried to detect planetary atmospheres from Earth, but to no avail," remarked co-author Mercedes López-Morales at the Carnegie Institution's Department of Terrestrial Magnetism. "We hit it right two nights last summer. The successful recipe is a planet that emits a lot of heat and has little to no wind in its atmosphere. Plus it has to be a clear, calm night on Earth to measure accurately the differences in thermal emissions when the planet is eclipsed as it goes behind the star. Only about one of every 3,000 photons from the star comes from the planet.... The magic moments came on July 2nd at the European Southern Observatory's Very Large Telescope (VLT) and on August 3rd on Carnegie's Magellan-Baade telescope in Chile."

There is no doubt that Drake's equation creates more questions than answers. With the rate of discovery dramatically increasing, however, we are always getting closer and closer to answering our favorite science fiction question: are we alone in the universe?

---
Play with the Drake Equation here.
A more detailed description of planet-finding techniques can be found on NASA's Kepler website
Welcome to my Moon Base
More Articles All Articles
About