Chris Rollins
As worldwide demand for cleaner energy grows, scientists are working frantically in every area to improve the amount of energy we are able to generate from various renewable sources. Many existing technologies, such as wind and solar power, are advancing slowly in efficiency as research continues, while others such as wave power are merely prototypes awaiting verification. Solar panel technology has undergone numerous upgrades over the years, many of which have increased efficiency by altering the materials and coatings applied to the panels. And now, two new nanotechnologies may provide a large increase in solar panel efficiency, driving solar panels down to costs manageable for homeowners and small businesses. 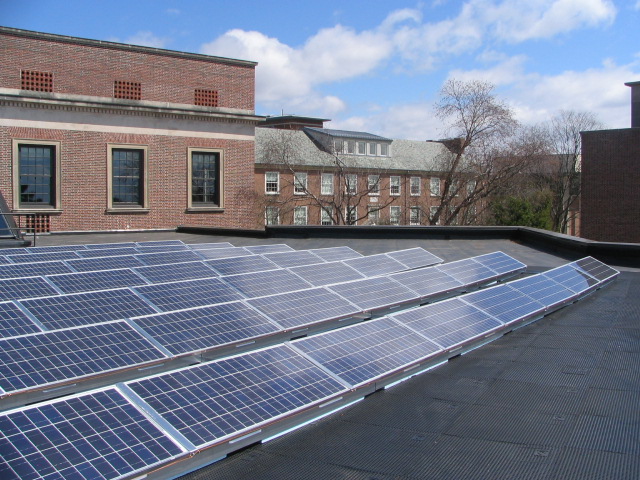 Up and Coming: Solar panels may soon be far more efficient, thanks to recent advances in nanotechnology. Photo Credit: Denison University

Solar power can take on many forms - for instance, the infrared light can be used to heat water for a home or a steam engine. It can also refer to photovoltaics, which convert light energy directly into electricity. Photovoltaics work by sandwiching two materials together, one with a few extra electrons and one with slightly less. When light hits the material, it adds energy to the extra electrons and motivates them to move across the junction between the two materials to the material with a deficit of electrons, where it then flows through the electric circuit and back to the side with excess electrons. Newer solar cells use technologies such as multiple junctions and layers of semiconducting material to increase efficiency, as well as coatings on the sunlight side of the cell.

The Earth is bathed in enough sunlight every hour to power the entire world for a year. The reason we can't harness all of that power lies in the very low efficiency of solar cells. At their conception, solar cells were around 4% efficient - meaning that only 4% of the incident solar energy was converted into electricity. Now, commercial solar cells can reach efficiencies around 15%, although much higher efficiencies (~40%) have been demonstrated in laboratory conditions.

New nanotechnologies, however, will help in a different way. When light strikes a metal, it often creates "waves" of disturbance in the electrons bonded to the surface. If the metal on the surface is a small particle instead of a smooth surface, the particle will vibrate - scattering the light and keeping it inside the solar cell. In addition, by changing the size of the particle, researchers were able to control the frequency of the scattered light and tune it to the band gap energy of the material. Both of these effects greatly increase the amount of light absorbed by electrons in the cell, and therefore increase the number of electrons that cross the junction and enter the electric circuit.

Kylie Catchpole and Albert Polman of the FOM Institute for Atomic and Molecular Physics in The Netherlands are publishing the results in a special energy issue of Optics Express, published by the Optical Society of America. In the paper, they claim they can increase the absorption of red light by a factor of 10. Catchpole also seems confident that their work will be used on all types of solar cells in the near future: "I think we are about three years from seeing plasmons in photovoltaic generation. An important point about plasmonic solar cells is that they are applicable to any kind of solar cell."

Solar cells face another problem in that many electrical contacts are required to connect the sun side of the junction to the circuit. Since the material itself is only semi-conduction, current can't flow through the circuit solely by contacts placed on the sides. Often, very thin wires are used to transfer electrons back to the positive side. This has the unfortunate effect of removing usable area that could be used to change light into electricity. 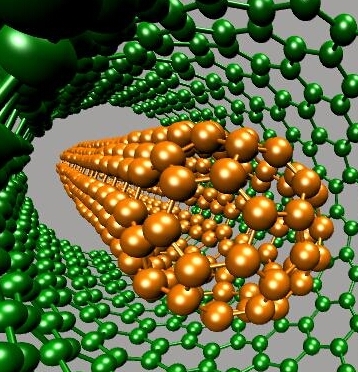 Now, research at Northwestern University has created a method for separating double-walled carbon nanotubes from single-walled and multiple-walled nanotubes. Double-walled nanotubes have the impressive ability to conduct electricity while also being transparent - therefore, sheets of the material could be used to transfer electricity to the sun side of a solar array while still allowing the use of the total solar array area.

The technique, developed by Mark C. Hersam, professor of materials science and engineering in Northwestern’s McCormick School of Engineering and Applied Science, and professor of chemistry in the Weinberg College of Arts and Sciences, and Alexander A. Green, a graduate student in materials science and engineering at Northwestern, uses the different buoyancies of single-, double-, and multi-walled nanotubes to separate them. They are encased in water using a surfactant, which is similar to soap, and then spun in a centrifuge. The method determines the buoyant density of each nanotube, allowing seperation.

With transparent films and surface plasmons, solar cells should be seeing a dramatic increase in efficiency over the next few years. Hopefully the cost will come down enough so that they become ubiquitous on homes and businesses. It would certainly be a shame to continue letting all that sunlight go to waste.
Welcome to my Moon Base
More Articles All Articles
About