Chris Rollins
It seems like they're already everywhere - if you look down at your keyboard, one is providing the little green indicator for your Num Lock key, while another may be frantically blinking to inform you of your waiting voice mail. On your next drive, chances are you will stop at a stoplight lit purely by LED's and perhaps may notice a blinker made up of small, bright lights instead of one bulb.

LED's certainly are everywhere, faithfully providing indications of all kinds. But, with a few exceptions, the primary purpose of an LED is to indicate rather than illuminate, despite the fact that LED's do nothing useful besides produce light. A few new developments, however, may bring solid-state lighting into our homes very soon. 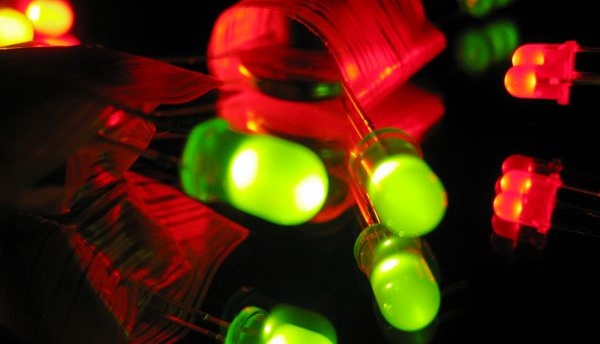 Little, but Bright: LED's may be poised to replace incandescent and compact fluorescent bulbs as our home or office light source. Photo Credit: MIT

An LED, or Light Emitting Diode, is a type of circuit element that emits light when electrical current flows through it in the appropriate direction. Like a normal diode, current flow is blocked when it travels against the direction of the diode. When a positive voltage is applied to the positive side of an LED, the electrons that flow are required to jump down in energy as they cross the diode - emitting the lost energy as light. This light is generated at one specific frequency, based on the characteristics of the materials used. When creating white light that may be useful for lighting, however, a blending of many colors is needed - something the LED does not seemed easily poised to accomplish, despite numerous advances in LED technology.

Red light was the first visible light LED to be produced, in 1962, followed by yellow and green. Much later, in the early 1990's, blue-spectrum LED's were developed - a huge advance in usefulness, since blue light can be combined with red and green to make white light. However, this approach was inefficient, and companies were scrambling to make a single diode that could produce white light on its own. Then, in 1993, a company named Nichia created the first white LED using a blue LED with a phosphor coating. The coating was the trick - it provided enough shifting of the light wavelength coming from the diode itself to create white colored light.

Why, then, aren't we using LED's - which are much more efficient than either incandescent or fluorescent bulbs - to light up our homes and offices? The major problem, of course, is cost. Current white LED's require a substrate made of sapphire and an additional mirroring layer to reflect light that would otherwise be lost. As a result, LED lights already on the market cost approximately $100, far too much for the average consumer.

"One of the main achievements in this work was placing a barrier on the silicon substrate to keep the zirconium nitride from reacting," said Timothy D. Sands, the Mary Jo and Robert L. Kirk Director of the Birck Nanotechnology Center in Purdue's Discovery Park. 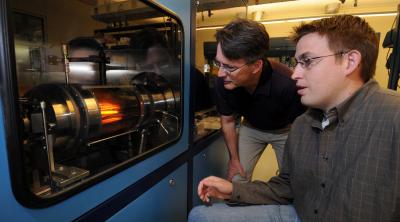 Reactor: Timothy D. Sands, left, watches over a reactor that deposits gallium nitride on silicon at a temperature of 1000° C. Photo Credit: University of Purdue

Silicon also provides a crystalline structure that the other materials conform to when deposited on the substrate.

"We call this epitaxial growth, or the ordered arrangement of atoms on top of the substrate," Sands said. "The atoms travel to the substrate, and they move around on the silicon until they find the right spot."

Crystalline structure is very important to the efficient working of an LED - if the materials used to create the LED were sprayed on glass, for instance, the LED would operate very inefficiently. Using silicon also reduces cost by allowing industry to scale up, or create large batches of LED's on large wafers of silicon, something the semiconductor industry is already good at.

LED lighting holds many advantages over traditional lighting, most notably in efficiency. "If you replaced existing lighting with solid-state lighting, following some reasonable estimates for the penetration of that technology based on economics and other factors, it could reduce the amount of energy we consume for lighting by about one-third," Sands said. "That represents a 10 percent reduction of electricity consumption and a comparable reduction of related carbon emissions." LED's are also more durable than incandescent or compact fluorescent bulbs, and have the added bonus of being devoid of mercury - a chemical found in compact fluorescent bulbs that makes them difficult to dispose of.

E. Fred Schubert, a professor of electrical engineering and physics at Rensselaer Polytechnic Institute in Troy, NY, recently published a paper where he describes the coming revolution of solid-state lighting. "Replacement is fine," he says. "But we must look beyond the replacement paradigm to see the true benefits of LED lights." Schubert imagines large panels that are able to control all aspects of lighting for a room, far more than simply "on" or "off." With cheap LED's available, many different wavelengths could be created in a room and blended to produce specific effects, like an accurate representation of sunlight at different periods of the day. This is important, since current white LED's produce a harsh bluish light that people generally don't like to use when doing normal indoor activities, like reading. The ability to control the hue and saturation of light is something many consumers may find appealing.

The way the industry is booming, Sands expects that we will have LED lights within 2 years. There are still technical hurdles, but he expects industry to clear them easily. "These are engineering issues," he said. "Not major show stoppers."
Welcome to my Moon Base
More Articles All Articles
About