Everyone knows there is a lot of crazy stuff on the internet, but did you know there is a lot of great writing about genes, genetics, and human diseases? And believe it or not, sometimes these pieces are written by people who know what they're talking about. If you're looking for what's new in human genetics, you've come to the right place.

Welcome to the 31st Gene Genie, a blog carnival dedicated to great blogging about human genes and how they impact our health. This Mother's Day edition includes an in-depth highlight of the growing industry of personalized genetics.

Too Many Genes for Height That Do Too Little
Can we find the gene that controls our height? Well, it looks it's not just one gene, it's many, and on his blog, Yann tells us that scientists are having a hard time figuring out how important these many genetic variants really are. Which is a little discouraging, because the studies to find them cost so much. 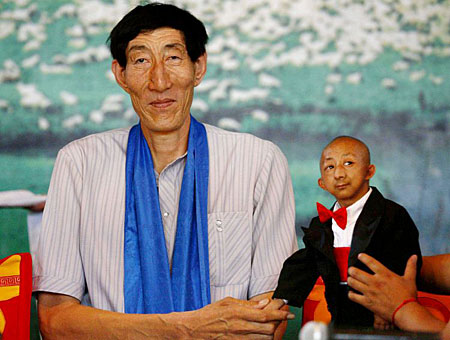 The tallest and shortest man get together

A Gene Therapy Cure for Blindness
Finding a cure for retinal degeneration, a genetic disease that results in blindness before you turn 30, has been tough. Finding ways to cure genetic diseases using gene therapy, instead of drugs (which don't really cure anyway), has also been extremely tough. A team of researchers in Philadelphia and Italy may have cracked both of these tough nuts at once. Josh over at Think Gene tells us about new results from a clinical trial that has successfully used gene therapy to improve the vision of patients with congenital retinal disease, which is good news not only for retinal disease patients, but also for anyone with a severe genetic disease.

Your Kids and Genetic Testing
As we proceed full steam ahead with genetic testing, is anyone stopping to ask "But what about the children?" Elaine at Genetics and Health is asking questions about genetic tests, ethics, and kids.

The US Congress may be ready for personalized genetic testing, but are we?
Becky, at A Truth Universally Acknowledged talks about the genetic non-discrimination act that will soon become US law, but notes that there are hurdles to leap before personalized genetics will function smoothly and ethically.

Really Weird, But For a Good Cause
From the Women Tribune: Help cure cervical cancer by voting for your favorite underwear. Hey, whatever helps!

A Gene To Stop Spinal Muscular Atrophy
The Gene Genie isn't just about genes and blogs, but you will need a blog post to translate this piece from the journal Science: "Plastin 3 Is a Protective Modifier of Autosomal Recessive Spinal Muscular Atrophy." What this means is that researchers have solved a mystery behind spinal muscular atrophy, a very lethal childhood genetic disease. This disease comes about when motor neurons die off in your spine because you're missing a critical gene for keeping them alive. Amazingly, some kids with missing this important gene remain healthy, while their siblings with the same mutation die of the disease. The solution to this puzzle may be the gene Plastin 3, which in larger doses may prevent the development of spinal muscular atrophy by keeping critical motor neurons from dying off.

Genetic Variants and Breast Cancer
Another piece by Josh at Think Gene has more Mother's Day news, telling us about newly discovered genetic variants that may be linked to breast cancer. We already have a few solid genes known to be involved in breast cancer, but it's a complex disease, and the more we know, the better we can find new cures. The interesting thing about these particular genetic variants is that they don't damage the protein produced by this gene; they cause your cells to make too much of this protein, which can lead to cancer.

Anti-Social Mice and Schizophrenia
You don't have to go anywhere for this one. Right here at Adaptive Complexity, you can read about a gene that affects brain size and social interaction in mice, which may also be responsible for brain changes in schizophrenics.

In this edition of Gene Genie, we have an in-depth look at the fledgling personalized genetics industry, which, for better or worse, is destined to play a large role in 21st century medicine.

Genetic Tests for Osteoporosis
Steve Murphy, the Gene Sherpa gives us advice on genetic tests for osteoporosis (good Mother's Day advice for many of our mothers, I'm sure): don't take 'em. At this point, the genetic risk factors we can test for don't add anything to the already well known risk factors, like smoking, low estrogen, and... I'll let Dr. Murphy tell you the rest.

What's it like to have your own genome sequenced?
What does genetic testing have to do with a 100,000 watt blowtorch lighting the LA afternoon skies? Andrew, over at Buzzyeah, has had his entire genome sequenced, and he bares it all on the John and Ken Radio Show. Just like those geeks who like to blog about every step of unpacking a new computer, Andrew has a whole series of pieces about unpacking his genome sequencing results. I promise that these pieces are much more interesting than some guy pulling his new iMac out of a box.

Making a Buck Selling Genetic Tests
Read about how to make money selling personal genomic services over at Eye On DNA. Hsien-Hsien Li says the key is not finding lots of customers - it's finding customers with lots of money.

You Could Sequence Genomes in Your Basement...
... if you had the $500,000 to buy the machine. But at least the space is no longer an issue. At FinchTalk, read about what the next generation of genome sequencing labs will be like.

Capitalism and Genetic Testing May Be a Good Combination
Are you getting the best bang for your buck when you buy a genetic test? At Predictive Health Ethics Research, we learn that growing competition in the personal genetics industry may be good for quality control. But customer's still may have a hard time figuring out just what it is they're getting.

The Capitalists Themselves Go Head To Head
The leaders of the three big personal genetics companies face off at Long Island's Cold Spring Harbor Laboratory, and Daniel at Genetic Future tells us what they have to say. Go find out what some of the biggest names in personal genetics think about the industry.

Genetic Variants That Make You Fat
One of these personal genetics companies, 23andMe, has its own blog, The Spitoon (which refers to the fact that the company collects DNA from your saliva; it's not a statement about their view of blogging). Joyce tells us about new genetic variants in a gene that regulates your appetite.

Everything You Ever Wanted To Know About A Personal Genetics Company
And finally, Berci, the man behind Gene Genie, has an interview revealing more about one of the big three personal genetics companies, Navigenics, as explained by one of its co-founders.

The cool Gene Genie logo was made by Ricardo, over at My Biotech Life - head over there and see some other nice science weblogos, not to mention good science writing.

Bloggers, the next Gene Genie comes out May 25th at Highlight Health. Get your submissions in here.