Michael White
One of the biggest recent breakthroughs in stem cell research is the ability to reprogram non-stem cells into stem cells using genetic engineering. The hitch with this technique is that genetic engineering like this can have side effects: stem cells produced in this way can turn into tumors in mice (and presumably humans, but we haven't tried that yet).

And thus researchers have been looking for ways to reprogram stem cells without genetic engineering. One promising way to do this is to use chemicals that can mimic the effects of the genes typically used for reprogramming. (The jargon for these genes is 'reprogramming factors' - who says technical jargon has to be opaque?)

The trick is finding these chemicals. If you watch 20/20 or read the magazines in the A&P checkout line, you may be under the impression that this should be an easy task, since it seems like we're swimming in hormone-mimicking chemicals that leach out of just about everything, from zip-loc bags to water bottles to the box your Big-Mac came in.

It is true that there are a lot of chemicals out there with bioactive properties, but to find chemicals with the right reprogramming properties is not trivial. The biggest problem is developing a quick way to test hundreds of thousands of chemicals. Determining whether you've got a batch of stem cells in your petri dish is difficult and time consuming; you can't just drop your chemical on a sample of cells and see whether you've got stem cells there in the morning. Doing the requisite testing for one chemical would be laborious; doing it for thousands of chemicals (at various doses to boot) is impossible.

A group of researchers based primarily at the Scripps Research Institute and MIT has come up with a a clever way to find those chemicals that can reduce or eliminate the need to genetically modify the cells that are to be reprogrammed into stem cells. The scientists used what is known as a 'reporter gene' system to quickly identify which chemicals have the biological activity to replace a stem cell reprogramming gene.

It works like this: the reprogramming gene the researchers were interested in replacing is called Klf4. Klf4 turns on another gene called Nanog. What you want is a chemical that can (among other things) turn on Nanog without the need for Klf4. To know quickly whether the Nanog gene has been flipped on, you hook up the regulatory DNA surrounding the Nanog gene and hook it up to an easily detectable gene, such as one the fluoresces or otherwise lights up. (It's easy to detect light; it's much harder to detect mRNA.) That way, if Nanog gets switched on, your light-generating gene also gets turned on, and all you have to do is look for cells that are lit up.

So the researchers made a reporter gene system that was responsive to things that turn on Nanog, and tested their library of chemicals on a cell line harboring the reporter gene. Any chemical that caused the cells to light up was subjected for more extensive testing to determine whether that chemical could in fact functionally replace the reprogramming factor Klf4.

Using this reporter gene strategy, the researchers were able to narrow down their list of 500,000 chemicals to just 135 that seemed like promising Klf4 replacements. As is typically the case, these 135 chemicals fell primarily into three different classes: flavones, lysergamides, and paullones. This is a key result, since once you have an idea of which class of chemicals is going to give you the biological effect you want, you can focus your resources on finding (or designing) an optimized drug within that class of chemicals, one with much more effective properties than the initially discovered compound.

The researchers found that one chemical in particular, kenpaullone, was able to work well for reprogramming stem cells, although not as well as the original genetic factor, Klf4. But with a lead compound in hand, the researchers can begin working on finding a more efficient variant of kenpaullone. One possiblity to keep in mind is that no single drug may be able to replace a single reprogramming gene; however, drug treatment is easy (and genetic engineering is hard). Scientists want to reprogram with as few foreign genes as possible, but there is no such limitation on drugs. If it ultimately takes 10 drugs to replace the 4 reprogramming factors, that's OK.

The ultimate goal is to be able to make stem cells using only drugs. Drug delivery is still a much, much more efficient process than genetic engineering; if we want to reprogram stem cells with ease, drug treatment is a promising way to go. 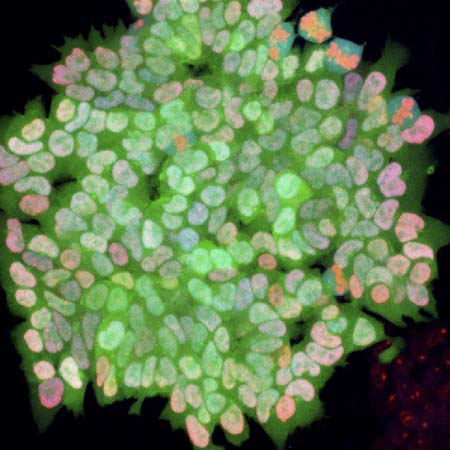