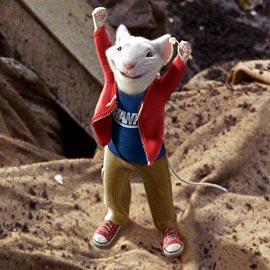 FOXP2 may be the gene that makes us human - or so the hype goes. Hyped or not, FOXP2 is rightly a focus of intense research, since it is a gene that clearly has a major effect on human speech. Mutations in FOXP2 are responsible for some rare but strange language disorders, such as the inability to learn grammatical skills or make the proper mouth/facial movements to properly articulate words.


Chimps and mice have FOXP2, but they obviously can't talk (although, amazingly, FOXP2 mutations in song birds diminish the birds' ability to learn songs). Scientists have been suggesting for some time that changes in the FOXP2 gene may have played a key role in the development of language in recent human evolution, and maybe (indulging in wild speculation here), changes in FOXP2 were in part responsible for the Great Leap Forward in human cultural evolution that occurred about 50,000 years ago.

So if FOXP2 is somehow responsible for the recent evolution of human language skills, there is only one obvious experiment to do: put the human version of the FOXP2 gene in a chimp and see if it talks. The problem there is that making transgenic chimps is generally considered unethical, not to mention technically difficult.

A group of scientists did the next best thing - they put human FOXP2 into a mouse, and the results are reported in the latest issue of Cell.

Disappointingly, mice with human FOXP2 don't talk, but they do have some interesting brain features: "medium spiny neurons have increased dendrite lengths and increased synaptic plasticity," which is almost as amazing as the ability to talk.

This amazing, because what the researchers found is that human FOXP2 placed into a mouse causes changes in a region of the brain called the basal ganglia. In humans, the basal ganglia region is important for, among other things, speech, word recognition, and language comprehension. FOXP2 mutations in human patients have an impact on the performance of the basal ganglia.

One of the key findings in this study is that human FOXp2 increases synaptic plasticity in the mouse basal ganglia neural circuits. As the term suggests, synaptic plasticity is the ability of neurons to change the strength of the connections they make with each other. This ability is important for forming efficient, information processing circuits in the brain. It is possible that changes in FOXP2 produced changes in the basal ganglia circuits that improved our "capacity to learn and coordinate the muscle movements in lungs, larynx, tongue and lips that are necessary for speech," in the words of the study authors. How that might have worked in detail still has to be worked out.

If this story holds up, it will be a fascinating example of how very small, simple changes in genes can produce major effects. There are only two differences in the amino acid sequences of the human and chimp versions of the Foxp2 protein, and these two amino acid changes were enough to cause significant changes in the brain circuitry in the humanized mice - not quite enough to make a talking transgenic pet, impressive nonetheless.