Nevertheless, an extensive new report written by the Committee on Lessons Learned from the Fukushima Nuclear Accident for Improving Safety and Security of U.S. Nuclear Plants devoted an entire chapter to the issue.

The report, published by the National Academies Press, recommends that regulators such as the Nuclear Regulatory Commission guard against erosion of their independence from outside influences, that regulators and industry continually monitor safety culture, and that both increase their transparent communication with the public about efforts to assess and improve safety culture.

“The committee quickly came to understand that the lack of a strong nuclear safety culture was an important contributing factor to the Fukushima Daiichi accident,” the authors write in the chapter's introduction. “The committee also came to appreciate the important role that nuclear safety culture plays in nuclear plant operations and regulations in the United States.”

The Fukushima Daiichi nuclear facility was heavily damaged on March 11, 2011 by the Great East Japan Earthquake and tsunami. The shore-hugging plant flooded and lost power. Three reactors suffered severe core damage. Hydrogen explosions occurred in three reactor buildings. The hobbled plant leaked radiation, stoking fears in Japan and abroad. Since then, efforts have been underway to clean the site and dismantle the plant. 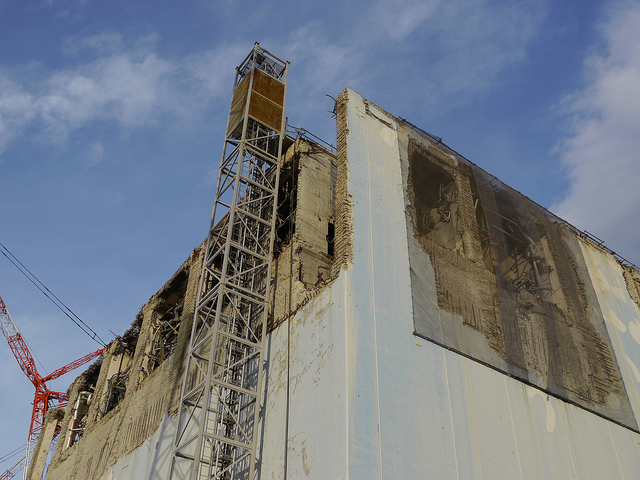 Unit 4 of Fukushima Daiichi nuclear power plant on Dec. 18, 2012. The remains of the building’s upper levels, which were destroyed by a hydrogen explosion, were removed to allow for construction of a cover so that fuel stored in the unit’s spent fuel pool could be moved to a common pool. Photo by Gill Tudor / IAEA. Some rights reserved.

The report notes that both Japan and the U.S. have proffered statements that would seemingly signal a commitment to a strongly safety-oriented organizational culture, defined as a confluence of behavioral norms, shared attitudes and traditions. After the Fukushima disaster, however, it became apparent that in Japan there was a wide gulf between these statements and their implementation.

Both industry and government share blame for these shortcomings. For instance, the Tokyo Electric Power Company, which operated the plant, admitted to falsifying reports to Japanese regulators in 29 cases between 1988 and 1998, as well as frauds in safety-related inspections in 1993-1994.

When improved seismic and tsunami safety standards for the facilities, neither TEPCO nor Japan's Nuclear Safety and Industry Agency made sustained efforts to enact them.

NISA, say the authors, was the victim of regulatory capture – a situation in which a regulating body becomes beholden to the entities regulated by it. This was, to some extent, by design: NISA was subsumed under the Ministry of Economy, Trade and Industry. The report calls this ministry “an aggressive advocate for promotion of nuclear power in Japan and abroad.”

NISA was rife with features of a captured agency, including a revolving door between industry and regulatory jobs and a policy whereby plant operators were allowed to apply regulations on a voluntary basis.

In the wake of the Fukushima accident, NISA was reorganized as the Nuclear Regulation Authority and given greater independence as an extra-ministerial part of the Environment Ministry. There are also new restrictions to limit members of the NRA from taking jobs in METI or in the nuclear industry.

The authors, however, say these actions are not enough. They conclude that the new structures are “unlikely to be effective unless they establish and closely adhere to good safety culture practices.”

Compared with Japan, the report offers some good news about the state of nuclear safety culture in the U.S. Both the NRC and the Institute of Nuclear Power Operations, a non-profit industry consortium, have detailed safety culture policy statements.

“The INPO principles show that implementation of the nuclear safety culture is an organizational obligation that begins at the top of the corporate ladder and applies to every worker at nuclear plants,” the authors explain. The INPO provides biannual evaluations of plant operations. Operators have safety review groups that meet regularly to review plant safety and report their findings to managers. Some nuclear operators have even created independent review groups to visit the plant and draw up their own reports.

There is also work under way to establish metrics with which to measure safety culture.

While the report lauds these efforts, it also cautions that gaps remain. The NRC's policy statement has no mechanism of enforcement, and the INPO lacks the authority to enforce many of its policies.

The committee was divided on whether the NRC may be succumbing to a level of regulatory capture akin to Japan's. The U.S. regulator has the advantage of being separate from nuclear research and promotion, which falls under the Energy Research and Development Administration. It also has formal independence from the Executive Branch (though not from Congress).

But some members note that the NRC committed itself in the late 1990s to increased industry participation in regulatory activities. This led to the establishment of some voluntary programs instead of direct regulation. Participation in the voluntary programs varies, leaving no assurance of consistency. A post-Fukushima examination by the NRC of U.S. nuclear plants' severe action management guidance, for instance, found that facilities implemented that guidance inconsistently.

One incident that illustrates this faction's view is the near-accident in 2002 at the Davis-Besse nuclear plant in Oak Harbor, Ohio. Corrosion had eaten into the reactor pressure vessel head, leaving only about three-eighths of an inch of material holding back the reactor coolant. The NRC had allowed the plant to operate prior to this discovery, despite strong indications the facility was not in compliance with regulations.

Other members of the committee, however, say the NRC took appropriate action afterward by shutting the plant down, fining the operator, and taking general steps to strengthen safety culture. They point out that the incident occurred over 10 years ago, and so might not reflect the current regulatory state.

Some members also question whether industry participation has truly weakened the NRC. They note that industry was intimately involved with regulation prior to the 1990s, and that all agencies expect involvement by stakeholders.

“The committee does not have enough information to determine whether industry participation in regulatory processes has increased since the late 1990s or whether voluntary initiatives are being substituted for regulatory actions,” the authors write.

How, then, can one be sure words about safety culture are matched by attitudes and deeds?

More sunlight. The chapter conclusion says the best way to ensure a strong safety culture is to increase communication with, and feedback from, the general public.

“Open and transparent communication is an important component of the nuclear safety culture and essential to maintaining confidence in nuclear power,” it says.