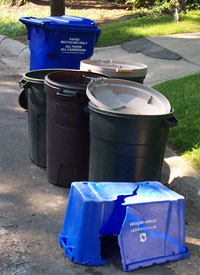 Unfortunately, junk science can be generated by people with agendas, and the editorial process does not always prevent it from getting the undeserved legitimacy of publication.  In extreme cases the legitimate scientific community responds, but can it undo the damage?

Recently a group of scientists led by Gilles-Eric Seralini of the University of Caen published a feeding study which purported to find tumorigenic effects of GMO corn and glyphosate. It was so blatantly flawed in design and interpretation that it elicited a rapid and overwhelmingly negative response.

In an unprecedented move, the French academies of agriculture, medicine, pharmacy, science, technology and veterinary studies released a joint statement calling the Seralini paper a "scientific non-event" and the overall assessment that:

"This work does not enable any reliable conclusion to be drawn."

This follows a similar critique by the German, Federal Institute for Risk Assessment (BfR) which concluded:

"The study shows both shortcomings in study design and in the presentation of the collected data.  This means that the conclusions drawn by the authors are not supported by the available data."

This sort of rapid rejection by such an agency was also unusual.  Today, ANSES, the French agency responsible for risk assessments with biotech crops, published an opinion that:

"The study's central weakness lies in the fact that the conclusions advanced by the authors are not sufficiently supported by the data published."

While these statements are in the civil and precise tone of scientific communication, they amount to as much of a "smack down" as is possible from the restrained, academic and regulatory communities.  The currency of respect in the scientific community is solid data from objective, well designed, well executed, and properly interpreted experiments.  The "Seralini study" met none of those standards and should rightly be ignored by the broader society unless someday confirmed by more objective research.  Unfortunately, that is not a likely scenario.

How This Controversy Will Play in the Anti-Science World

It is far more probable that this "cancer link" will become another permanent entry in the lexicon of anti-GMO "evidence."   It will join toxic lectins-in-potatoes, Monarch butterfly toxicity, and Indian farmer suicides as endlessly repeated, mythic narratives in the echo-chambers of groups and publications which oppose crop biotechnology.  It matters little how much good, respectable research has been published to document the safety of biotech crops, such as a review of 12, independent, long-term feeding studies published in the same Journal as the Seralini study just this April.

It matters little how many major scientific bodies conclude that biotech crops are safe.  To those who have bought into the conspiracy thinking, this will stand as irrefutable evidence that they have always been right to oppose this technology.  All criticism of the Seralini study will be written off as part of the grand, profit-driven conspiracy to kill everyone with GMO crops.

The Real Fallout From Fear-Mongering

It would be bad enough if something like the Seralini study simply contributed to the unnecessary angst amongst consumers around the world.  It also has very real political, economic and practical effects.  For instance brand conscious food companies have used their leverage to prevent the development of GMO versions of potatoes, bananas, coffee and other crops because they fear controversey.  Apple growers worried about the market response are opposing the introduction of a non-browning apple even though it was developed by one of their own fruit companies.  French activists destroyed a government-run field trial of a virus-resistant root stock which could have made it possible to produce good wine on sites that have become useless because of contamination with sting nematodes and the virus they vector.  California voters have the potential to pass a seriously flawed "GMO labeling" initiative next month that could only serve the purposes of the lawyers and "natural products" marketers who created it.

More importantly, European and Japanese importers of wheat essentially blackmailed the North American wheat producers into blocking biotech wheat development because those companies were nervous about consumer response in countries where GMO angst is so high.  This has delayed by decades not only specific desirable trait development, but also what might have been an enormous private investment in a crop that is critically important for feeding a lot more people than just those in those rich countries.

There is a huge cost of "precaution" based on poor science.

You are welcome to comment here and/or to write me at savage.sd@gmail.com