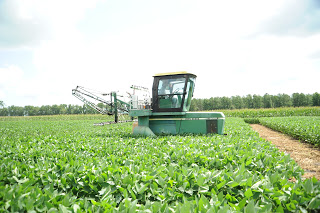 Does the adoption of GM crops lead to more or less pesticide use?  This is a frequent topic of debate, but generally one that misses the point.  Both sides make the same erroneous assumption that all pesticide use is, by definition, a bad thing.

In fact, it depends on the particular pesticide in question, the reason it is being used, and the details of its application.  Most modern pesticides are extremely low in hazard to us or to the environment.  Both "sides" of the GM debate would do well to stop over-simplfying this issue.

What Biotech Can and Can't Do

The examples are quite positive from the farmer's point of view.  However, for crops with biotech insect resistance, pesticides remain an important and well regulated tool for farmers who still have to deal with many other pests for which there may never be a biotech solution.   The supporters of crop biotechnology need to maintain the perspective that biotech traits are simply one tool in the tool box.

Putting "Increased Pesticide Use" Into a Global Perspective

Jason Mark recently posted a "rebuttal" to Lynas' speech on Earth Island Journal.  It relied on exactly the sort of "self referencing" sources that Lynas critiqued, but one argument struck me as sufficiently absurd to warrant a response:

"A peer-reviewed study published last year in Environmental Sciences Europe found that GM plantings in the United States led to a 7 percent increase in chemical spraying."

Seriously? A European publication expressing angst about an incremental change in US pesticide use on its major crops?  Oh, it is the Benbrook study which generates a big number by totaling over 16 years on hundreds of millions of acres.  Does Benbrook know about the intensive use of pesticides on crops in Europe? (see graph below). 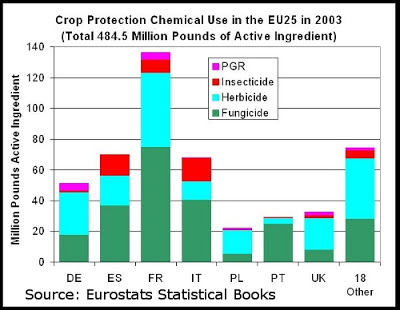 Why do European farmers use so much pesticide?  The reason is simple: they have to deal with lots of pests!

As with farmers everywhere, those in Europe face insects, weeds, fungi, bacteria and viruses which, if uncontrolled, diminish the amount of food that they can produce.

They farm in a generally wetter climate, and so they need lots of fungicides.  Like any farmer, they use the highly regulated pesticide options available to them so that they can limit the damage from those pests.

If they didn't use those pesticides, they would be making inefficient use of their land and of other necessary inputs like fertilizers and fuel.  As it is, Europe imports a great deal of its food and feed (206 million metric tons for the top 20 commodities imported in 2010).

When European farmers use pesticides to be as productive as possible, they at least help to minimize that strain on the global food supply.

Putting "Increased Pesticide Use" Into Quantitative And Contextual Perspective

The 7% increase Environmental Sciences Europe cites as an offshoot of GM crops mainly involves a herbicide, glyphosate, which happens to have a benign profile in terms of toxicity to things other than plants.  The transition to glyphosate for "Roundup Ready"crops replaced the use of sulfonyl ureas, a class of herbicides which had extremely low use-rates.

Thus, the still modest glyphosate use rate of 22-44 ounces of product per acre represented a small increase in total "pounds on the ground." Ken Cook of the Environmental Working Group responded to Lynas with a post in which he describes these crops as being "slathered with chemicals."

The 44 ounce rate means that each liquid ounce is spread over an area of almost 1,000 square feet. The active ingredient is applied at less than 0.01 grams per square foot.  Somehow, that does not fit my mental image of "slathered."

The far more relevant point is that glyphosate tolerant crops represented a more practical alternative to mechanical tillage for weed control and enabled wider adoption of "no-till" farming.  That is a system which conserves soil moisture, prevents erosion, dramatically reduces nutrient and pesticide movement to streams and rivers, and reduces fuel use.  If biotechnology and herbicides can combine with sophisticated equipment to enable this sort of farming - all the better.

Bottom line, a biotechnology trait may decrease or increases the need for a pesticide.  There will also be many cases where the biotech trait has nothing to do with pesticide use.  There is no necessary good or bad linkage between these two categories of agricultural technology - both can serve to make crop production better.  Both are options that should be available to those who farm.