I am 99.9% sure that there will never be commercial production of genetically engineered wine grapes ("GMO" to use the common misnomer). Even so, I'd like to indulge in imagining what could be if we lived in some parallel universe where rational scientific thinking prevailed.

Wine grapes are an extremely logical crop for genetic engineering because there is no tolerance for changing varieties. For annual crops like grains or vegetables, new varieties are bred on a regular basis to solve pest issues or to improve features like taste or shelf life. 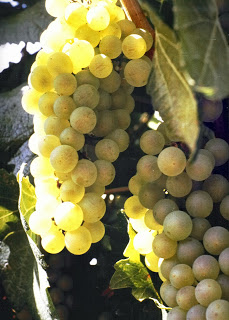 Breeding of perennial fruit crops is a much, much slower process, but entirely new varieties are still introduced from time to time (e.g. Jazz or Pink Lady apples). Even what we call "heirloom varieties" of most vegetable or fruit crops are mostly quite young by wine grape standards.

Conventional breeding isn't a viable option for wine grapes, not because it couldn't be done, but because in an industry so focused on quality and tradition, no one would consider it. The wine industry is based on specific varieties which are hundreds of years old and for which no new variety would ever be acceptable.

That is true for varieties in their original appellations (e.g. Pinot Noir and Chardonnay in Burgundy or Cabernet Sauvignon and its blending partners in Bordeaux).

It is also true for those same varieties that now make great wines in "New World" (e.g. Malbec in Argentina, Zinfandel in California, or Syrah in Australia).Therefore, wine grape varieties have been cloned for hundreds of years, specifically to avoid any genetic change (they have always been grown from rooted cuttings or from grafted buds). Grapes make seeds, but the seed won't grow up to be the same variety as the parent, thus they are never used as a way to grow new vines.

The Downside of Ancient Varieties

Of course, by sticking to very old varieties, wine grape growers must deal with many problems which might otherwise have been solved through breeding. Grape growers have been able to deal with some pests that attack the roots by grafting onto diverse "root stocks" with novel genetics. That was the solution to the great Phylloxera epidemic of the 19th century. But rootstocks can only help with a limited number of grape growing challenges.

Why Genetic Engineering Would Be Logical For Grapes

Biotechnology is a perfect solution for wine grape issues because it allows changes to address one specific problem without disrupting any of the characteristics that determine quality. Of course, each variety would have to be individually transformed, but in our imaginary rational universe the regulatory regime would be made easier for multiple uses of the same basic genetic constructSo, genetic engineering could be a very cool solution for various challenges for grapes. I'll list a few of the diseases that might be fixable this way. 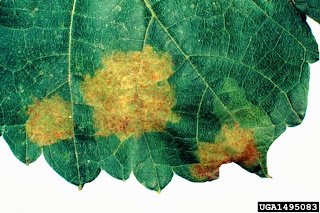 As I described in an earlier post, the noble grapes of Europe must now be rather intensively sprayed with fungicides because a disease called Downy Mildew was introduced in the mid-1800s from New World grape species.

Those same North American species have a good deal of resistance to that disease, and the genes for those traits could probably be identified and moved into the traditional, high-quality varieties. 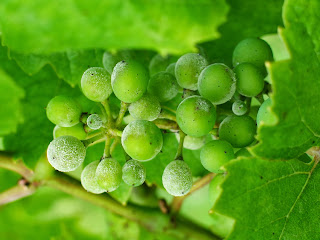 This strategy might also be employed to reduce susceptibility to another disease called Powdery Mildew which requires frequent sprays or sulfur dustings even in dry environments like that of California.

There are even susceptibility differences between varieties which might be able to be moved. 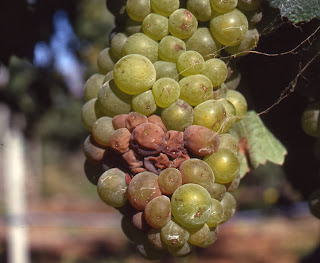 It is possible to loosen up clusters with a very well-timed spray of the plant hormone gibberellic acid, but that is difficult and can affect the next year's yields.

If the genes which control the development of the main cluster stem (rachis) could be identified, it would be possible to make less rot-prone versions of great varieties and thus reduce the amount of waste caused by Botrytis.

Viral diseases of grapes, spread by insects, can shorten the productive life of a given vineyard planting. If you tour grape growing regions in the fall you may see vines with leaves that have turned red. It's sort of pretty, but it means that those vines are infected with Leafroll Virus - spread by mealy bugs. Such vineyards bear progressively less fruit and fruit of lower quality until the point at which it becomes necessary to tear out those vines and re-plant - often years before it would otherwise be necessary. 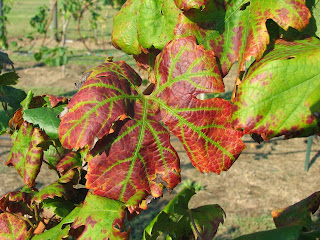 A transgenic solution to that virus is definitely possible as it was with a virus that nearly destroyed the Hawaiian Papaya Industry.

Grapes are also susceptible to a disease which actually kills the entire vine. The pathogen is bacteria-like and is endemic to various riparian plants in the US.

If an insect vector happens to move from those plants to a vineyard, it can lead to an infection called Pierce's Disease which will soon destroy the vine. In the Southeastern US this pathogen makes it impossible to grow the European grape varieties. In California infections were known, but were relatively rare because the native vector (the bluegreen sharpshooter) didn't tend to move very far into a vineyard.

Then in 1994, a new vector called the Glassy Winged Sharpshooterwas introduced into Southern California and started vectoring Pierce's disease into vineyards on a large scale. For a while it looked like this new combination would be the sort of existential threat now facing the Florida Orange industry. Fortunately, growers learned how to check the population of the vector by spraying it when it was in neighboring citrus groves, before it moved to the grapes. Also, it appears that some degree of natural biocontrol has kicked-in to keep the overall population of glassy winged sharpshooters manageable.

Should this disease become a major problem in the future, a genetic engineering solution might be the only viable solution.

Voluntary "GMO labeling" Would Be Easy for Wine

Because wine grapes can be extremely valuable (e.g. as much as $10-20,000/acre), and because quality is closely connected with the location where they are grown,"identity preservation" is common in the industry. It would be entirely feasible for grapes which were or were not "GMO" to be kept separate to what ever extent was desired. So, one winery could proudly label their wine as "improved via biotechnology to provide disease resistance," while the neighboring winery could confidently claim not to be "non-GMO" if they so desired.

Again, remember I'm talking about what could happen in a parallel universe where reason prevails. In our universe (as has already been demonstrated in both France and in Mendocino County California) reason quickly yielded to the politics of fear and unfounded concerns about "genetic contamination."

So, there will probably never be commercial "GMO grapes" in our universe, but that doesn't change the fact that it is a cool concept.