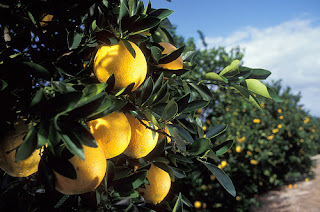 Amy Harmon's excellent, recent article in the New York Times describes how the Florida orange juice industry may soon be wiped-out because of a new bacterial disease spread by an introduced insect.  It looks like there could be a technology-fix for the problem using genetic engineering.  The question is whether the growers will get to apply that solution. 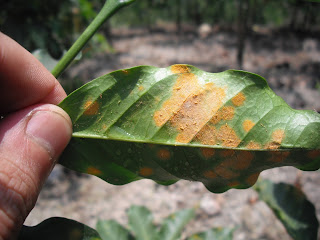 The sort of crisis situation now facing the Florida orange industry is not at all unique in the history of farming.  There have been many times when some new pest  threatened the economic viability of a major crop.

Sometimes the pest "wins" and a particular farming industry simply goes away.  In the mid 1880s when Coffee Rust made it from Africa to the coffee plantations that supplied England from Java and Sri Lanka, the industry collapsed, and so the English had to switch to tea to get their caffeine.

When Wheat Stem Rust made it too hard to grow wheat in the Southern colonies of what would later become the US, the farmers shifted their cropping to cotton and tobacco.  That involved much higher labor requirements which in turn lead to the sad institution of slavery in that region.

But there have been other times when some new technological breakthrough has saved a threatened crop, as it possibly could for the Florida orange growers.  I'll give just one example here.

Back in 1874, a plant scientist name Pierre Millardet was walking down a road in Bordeaux France.  The famous vineyards he was passing were being devastated by a fungal disease called downy mildew.  It had been unwittingly brought across the Atlantic by the British who came back with specimens of the wild grape species they found in North America (e.g. Vitis labrusca - Concord types).

Those grapes harbored the downy mildew which was not too problematic for them, but the Vitis vinifera grapes of the Old World were extremely susceptible.  The wet climate of Europe was also ideal for fostering the fungal epidemic. 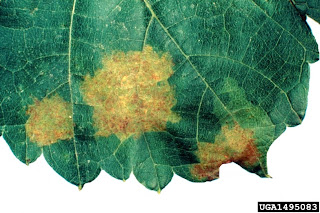 Grape downy mildew symptoms. Later leaves fall off. Fruit can be effected too.

Millardet was very concerned about this problem as were all the French looking at the possibility of not continuing to be able to produce wine.
As he walked past vineyard after vineyard nearly defoliated by the disease, he came upon one small part of a vineyard that looked remarkably healthy.  He quickly sought out the owner to ask why those vines looked so good.

It turned out that the grape grower had been frustrated by the fact that so many passer-bys on the road would help themselves to his grapes as they ripened.  He had concocted a mixture of copper sulfate and hydrated lime and sprayed it on the grapes to make them less attractive. 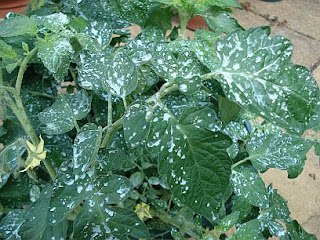 What the Bordeaux mix looks like sprayed on tomato leaves.

By accident the farmer had developed a reasonably effective fungicide.  Millardet promoted that option, and soon the "Bordeaux mix" saved the French and other European grape industries.  It also saved the European potato crop which was also being devastated by a related disease that belatedly followed the potato from its origins in the Andes and caused the epic Irish Potato Famine.

Fortunately today we have many superior fungicide options to protect these crops.  Copper-based fungicides were "state of the art" in the 1870s, but by modern standards they are rather toxic to mammals, persistent in the environment, and bad for aquatic invertebrates.  One of their remaining uses is for organic farming which has only a few fungicide options that qualify as "natural."  New, synthetic fungicides that protect grapes, potatoes, wheat and other crops in Europe and elsewhere are far better for health and the environment. Still, without the accidental discovery of the "Bordeaux Mix," the European wine grape industry could have disappeared.

I gave an invited talk for the Specialty Coffee Association and its annual symposium back in February. The Arabica coffee growers in the highlands of Central and South America are facing a severe, new threat from a disease called coffee rust.  My role at the the conference was to put that crop threat into a global and historical perspective.

This grape disease story is one of the examples in my talk titled: "Humans vs Pests, The Long View."