The Livelihood Of Small Coffee Growers Is Threatened By A Plant Disease
By Steve Savage | April 14th 2013 10:31 PM | Print | E-mail 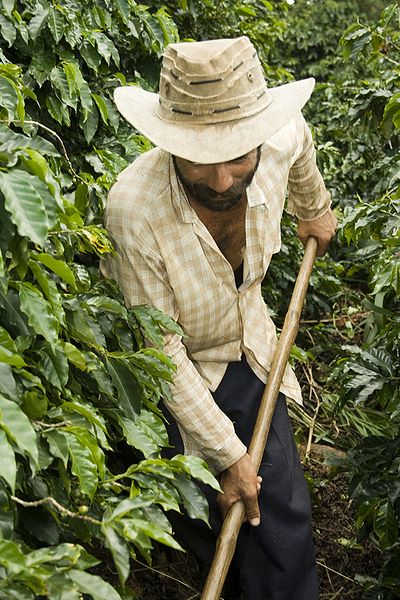 Some of the world's best coffee comes from the tropical highlands of Central and South America.  Recently these regions have experienced heavier rainfall.  This is probably due to climate change, but in any case it fosters severe epidemics of the Coffee Leaf Rust pathogen, Hemileia vastatrix.   This disease has a long history of disrupting coffee production around the world.  One reason the English drink tea is that the Ceylonese and Javan coffee plantations which once supplied them were devastated by this same fungus in the late 1800s.  Coffee production was moved to the Americas (among other places) and it wasn't until the 1970s that the rust pathogen made its way to the New World.  For the next several decades it remained a manageable disease in those areas, but in recent seasons, the disease has been severely affecting yields.

Last week I had the opportunity to attend the fifth Symposium organized by the Specialty Coffee Association of America which was held in Boston. The coffee rust problem was a major topic of presentations and discussion.  What we heard is that after increasing losses for the last two years, yield losses as high as 40% are anticipated in the 2013/14 season.

It is not unprecedented for a crop/industry to be faced with a new plant disease challenge, and there are a range of solutions. However, the high quality coffee industry of the Americas is largely dependent on small-holder farmers in relatively poor communities. There are logistical, informational and sociopolitical issues for those communities which leave its producers and their families economically vulnerable, particularly in a situation such as this. To make things worse, these farmers' reduced crop yields are coming at a time of low international coffee prices. There is a very real possibility that  many of the small producers will either shift to alternative crops/jobs or into unrecoverable poverty. Coffee grown by small farmers on mountainsides is a romantic narrative for those of us who consume coffee.  Things are not looking so romantic for the families fighting coffee rust.

Although there are diverse, wild sources of Coffea arabica, and there are scores of other Coffea species to broaden the germplasm-base, existing coffee plantings represent a very narrow spectrum of genetics.  This leaves the industry vulnerable to disruptive shifts in the weather or pest populations. Coffee is unusual among perennial crops in that it is propagated by seeds rather than by cuttings or grafting. These seeds are cheap and easily saved, so there has never been a commercial coffee breeding industry.  Instead there have only been modest and regionally focused, breeding efforts based on governmental support.  Having been warned about this situation several years ago, the Specialty Coffee Association of America began funding the World Coffee Research (WCR) organization to conduct basic research on coffee genetics and to institute multi-country variety trials.  Their goal is to develop pest resistant lines which can still achieve the desired quality. While this investment by downstream players is commendable, coffee has a complex genome and long time to reproductive maturity. That will mean that a WCR-generated solution to something like the rust issue won't reach farmers for something on the order of 15 years - even with the use of biotech advances like Marker Assisted Selection.  That is far too long from a grower point of view.  It might be possible to speed the process using a transgenic approach, but WCR has clearly stated that they will not pursue a "GMO solution." I'm sure that makes sense for the realities of marketing to many specialty coffee consumers in the rich world. However, taking that technology option off the table may significantly postpone the delivery of a scale-neutral solution for the coffee growers.

For now, the only option is to control the rust with the use of fungicide sprays. Technically this is quite feasible. There are several families of fungicides which are highly effective, very low in toxicity, and without significant environmental issues. These same fungicides are widely employed in the European wheat/barley industry and the South American soybean industry, both of which deal constantly with rusts and other diseases. However, fungicide use in this coffee setting has the complication of needing to be applied using backpack sprayers on rough terrain. There are also economic and information-transfer limitations which make this a non-trivial solution. Under this intense disease pressure, it will also be paramount to practice mode-of-action rotation to avoid selecting for fungicide resistance in the rust population.  The possible may not translate to the actual.

These challenges are daunting for "conventional" growers, but they are far more challenging for those growers who have been persuaded by their customers to become organically certified. For rust control, the organic growers are mainly limited to the use of copper-based fungicides.  These "natural" products are far less effective than synthetic options, require high use rates, and are easily washed off of the plant by rain so that they must be frequently re-applied. Copper fungicides are also far more problematic for the environment because of their mobility in water runoff and their detrimental effects on aquatic invertebrates. Yet, if the organic growers use the more potent and safe synthetic options, they lose their organic certification for three years. The consumers who buy organic coffee might be surprised to understand that they are driving an option which is less desirable from both an environmental and social justice perspective.

The Coffee Industry Response to the Crisis - Helping the Small Grower

The Boston meeting last week was my first opportunity to interact directly with the specialty coffee community composed of growers, brokers, roasters, equipment suppliers and retailers. I was impressed by the industry's commitment to both deliver a high quality coffee experience for consumers while attempting to address the needs of the people around the world who produce the beans. The people in this industry understand the complex socio-political-economic reasons why life is difficult for small-holder coffee farmers. They have tried to address that through various "fair trade" mechanisms. They also talked openly about the need to do more, particularly because of this disease challenge. There were positive examples described about collaborative efforts between commercially and NGO sponsored efforts to enhance the economic viability and food security of coffee farming families. It is a huge challenge, but there is no question that the coffee industry takes it seriously.

Because of the geographically diversified production of coffee around the world, we who are the consumers of coffee are not at serious risk of losing access to a favorite, caffeinated beverage.  The current threat is to the livelihoods of the small-holder producers in Americas.  Think of them when you enjoy your coffee.